Through the eyes of women filmmakers

"Women, Media and Transformations" was the leitmotif of a festival of documentary and short films for South Asian women filmmakers that concluded in Calcutta earlier this month. Shoma Chatterji was there and writes that the films offered a wide spectrum of subjects from ethnographic investigation to introspective, abstract journeys.
19 April 2006 -

"Creative treatment of actuality" was John Grierson's definition of the documentary. "The essence of cinema is its ability to transport the viewer to a different plane. The genius of cinema is contained in the process of cinema: the act of filming itself is what contains the potential to create art, for it is here that one can articulate this relation of the maker to the subject and to the spectator," said Dennis O'Rourke, the noted Australian documentary maker, about the non-fiction film. The act of creating a documentary film is one of synthesis upon synthesis, in the same way that, for a novelist, writing is re-writing. The 26 films screened at the recently concluded (1-3 April) festival of films in Calcutta substantiate this statement from the point of view of women filmmakers from South Asia.

"The personal is political" appears to be the underpinning layer for celluloid statements by women filmmakers across the world.

•  An empowering A.P. newspaper
•  Media and 'a gender vision'

"Women, Media and Transformations" was the leitmotif of this festival, which began in Delhi, moved on to Ahmedabad and from there to Calcutta. The International Association of Women in Radio and Television (IAWRT) presented the festival in Calcutta in collaboration with Nandan, the cultural complex owned by the state government of West Bengal. Of the 26 films, 18 were made by Indian filmmakers based in India whereas the rest were from Malaysia, Canada, UK - made by Indian women based abroad. Complementing the film festival was a poster exhibition on violence against women, and three workshops on different aspects of cinema and television, organised by Swayam, a Calcutta-based NGO.

"The personal is political" appears to be the underpinning layer for celluloid statements by women filmmakers across the world. While the festival offered a wide spectrum of subjects from ethnographic investigation to introspective, abstract journeys, most of the films chosen reflected an inclination for nostalgia, memories, relationships and the schisms within. Few, one must confess, ventured into broad-based narratives addressing larger issues, which, interestingly, instead of narrowing the focus, led to the raising of larger questions. Short fiction rubbed shoulders with the documentary.

If the festival were to be competitive, which, thankfully, it was not, the prize would have unquestionably gone to Gitanjali Rao's animation film Printed Rainbow. It is a beautiful story of a lonely old woman's life with her cat and the old man living opposite her home. The old lady finds escape in a colourful world of daydreams through flights of fantasy into adventure from her collection of matchbox labels. The next best film in the festival was Parvinder Kaur's Will Think of Food a personal statement by the director who faces a mental block while being commissioned to make a commercial on food without money, of course! It is a hilarious take on the entire process of filmmaking itself, and on the struggles of the lay filmmaker desperately trying to strike out on her own. 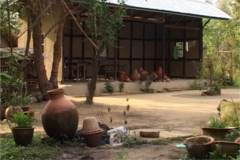 A still from Beyond the Wheel, by Rajula Shah.

Beyond the Wheel, by Rajula Shah, is a documentary that fluidly encapsulates the interaction between and among three noted, contemporary women potters distanced by region, language, religion and culture. The film offers interesting light on how the conventional taboo on the woman not permitted to touch the potter's wheel is circumvented by the two older women, one from Gujarat and the other from Manipur. The easy camaraderie creates a bonding that is articulated without being stated. She Write, by Anjali Monteiro and K P Jayshankar journeys through the works and struggles of four Tamil women poets, Salma, Kuttirevathi, Malathy Maitri and Sukirtharani. They are constantly the target of attack by men script writers in Tamil for their generous use of four-letter words and what these men term 'vulgar' imagery. But they refuse to be bogged down by these attacks and continue to write how they will, what they will.

Altar, by Leena Manimekalai sheds light on the rigid mindset of the Kambalathu Naicker community in Tamil Nadu. It is an ethnographic investigation with metaphorical interventions of the famous cattle fair in the area. The Naickers follow strange customs of child marriage for both boys and girls. Girls are often married to brothers of the same family and are permitted to sleep with any of them. It never occurs to the girls to question these age-old customs that do not have the sanction of law. The narrative however, tends to get diluted with too many interventions of the cattle fair.

Monisha Baldawa's Lemon Yellow Afternoons explores an evolving relationship between an ageing Tamil housewife and Chinu, a little Maharastrian girl, her neighbour in a Pune chawl, and how the older woman draws the energy to go on with the dreary routine of being a housewife from the little girl's vibrancy and innocence. Paromita Vohra's Where's Sandra is a light-hearted look at the Bandra-ka-Sandra motif Mumbaiyites are very familiar with. Vohra interviews a cross-section of women all of whom are named Sandra. They laugh at the jokes about their predecessors' mode of dressing and hold over Mumbai's secretarial jobs. Celebrity Bandraites scoff at arbitrary value judgements made on the morals of the girls. (In earlier times, secretarial jobs in Mumbai were mostly filled by Christian women in general and from Bandra in particular, because Bandra had a large Christian pocket.)

Sharmila placed under artificial respiration. A still from Untitled: Three Films from Manipur, by Kavitha Joshi.

Kavitha Joshi's presentation, Untitled: Three Films from Manipur essays three stories of the strife of civilians, especially women of Manipur, hanging on the last dredges of life, thanks to the Armed Forces Special Powers Act 1958. She also captures the deep-seated resentment among women leading to unceasing protest, including images of the valiant Sharmila who has been on a fast for about five years. The governments at the Centre and State levels have remained unmoved by Sharmila's fast.

Walking On A Moonbeam directed by Madhureeta Anand is a fictionalised account of a woman whose sleepless nights continue to be haunted by memories of sexual abuse as a little girl, resulting in bed-wetting. But the film fails to come across lucidly because of a rather confused and convoluted narrative aided by the same actress playing the role of mother and daughter. Reena Mohan, whose films earlier bagged international awards, fails to do justice to herself and to the medium of her choice through On an Express Highway, tracing the journey of a 33-year-old woman who voluntarily gave up the material world to become a Jain sadhvi.

For Maya, Vasudha Joshi's directorial debut, is her perspective on gender, as reflected through the personal histories of her mother, sister, daughter and herself. The rich tapestry of Ranjan Palit's brilliant cinematography that effectively captures chiaroscuro* in colour enriches the narrative.

A number of films screened are too personal to appeal to a larger audience and do not either inform, or educate, much less, entertain: Dipti M Panesar's Biji: A Documentary on My Grandmother, Samina Mishra's The House on Gulmohar Avenue and Rita Chandel's The Journey. Those films apart, Our Own Eyes (Ranu Sharma) and Trans (Tejal Shah) are abstractions that are commendable for the filmmakers' daring to experiment and explore new forms within the documentary and short-fiction format.

The common element that binds these women filmmakers is that they try to place their emotional perspective within a social process, which sometimes evolves into a strong political statement and sometimes does not. Wigan & Leigh, Drik-India, NEXGEN School of Management and Technology and Swayam supported the festival as co-sponsors.