The displacement of the Panchkuyian Road furniture market by the construction of the third line of the Delhi Metro has caused much uproar for almost a year. Many threats and agitations later, the market is still physically in place but hardly anymore a place to be in. Varupi Jain reports.
01 September 2004 -

The claustrophobia created by the tall Metro barricade is easy to feel - the 11-ft-wide corridor between the shops and the Metro barricade is suffocated with rickshaws, roadside display of furniture, customers, pedestrians, the stench of urine, and chunks of road broken by the rain. Rickshaws loaded with furniture can just about enter, blocking all other passers-by, and once in, they can barely turn back in the small space. In fact, the tortuous and torturous access to the furniture market has repelled many customers - adversely affecting the traders, a majority of whom are retailers. The confidence of many shopkeepers is shaken; many regret not having shifted to Bhai Vir Singh Marg shopping complex as proposed by the Municipal Corporation of Delhi (MCD).

Last year, after the traders threatened to convert to Islam in the event their furniture market was displaced, officials from the Home Ministry branch of the Parliament Street police station visited them to listen to their grievances. The traders also learned thereafter that officials from the Home Ministry, Delhi Government and MCD met the Lieutenant Governor for 3-4 consecutive days to discuss the case of potential displacement of Panchkuyian Road market.

What came of those discussions is anyone's guess. The traders, despite having a registered organization, have never been officially approached concerning their imminent displacement, nor have any meaningful alternatives been offered to them by the government. All the steps they have taken to counter the news of upcoming displacement have been based on their interpretations of media reports - guess work that only adds to their anguish, uncertainly and frustration. 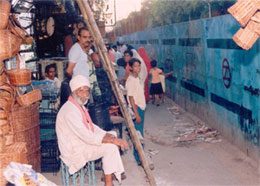 Picture: The cramped spaces and flith have affected business adversely.

Why did the traders start agitating without a single official word regarding their displacement? "Well, had we waited for official statements, maybe we would have received them in the form of a bulldozer. We reacted keeping in mind how the the Delhi Metro Rail Corporation (DMRC) works. In the case of Pusa Road shops, for instance, they announced in the newspaper that certain shops would be bulldozed on a particular date, irrespective of whether the affected people were reading those newspapers or not. Shopkeepers were shaken when they saw bulldozers arrive. Given this inhuman style of working, we have to be proactive. Who will protect our interest, if not we ourselves?" asks Arvind Mahajan, Secretary, Panchkuyian Road Municipal Market Association.

According to statements made by C B K Rao, the DMRC's Director of Planning, the market was to be shifted before work began on this Metro line. However, the construction has made tremendous headway without the market having budged an inch - though considerably inconvenienced. At the same time, current media reports maintain that work on the Bhai Vir Singh Marg complex is fast nearing completion, and the traders are wondering why the construction is underway when they have already refused to move to that site. The implications of the continuing construction - both by the Metro and at the complex - are left for the traders to infer.

"Had we waited for official statements, maybe we would have received them in the form of a bulldozer. We reacted keeping in mind how the the DMRC works."  •  Rerouting livelihoods

The DMRC is not the only body which could be blamed. The main entrance leading to the emergency gate of Lady Hardinge Hospital on Panchkuyian Road is nearly blocked by Metro barricades. The hospital administration decided to create an alternative gate next to the entrance of Kalawati Saran Children's Hospital on Bangla Sahib Marg. But patients are totally unaware of this new gate. As a result, while the road leading from this alternative entrance to the emergency is laid out and the gate stands tall, it is literally a road less traveled, and a gate hardly used. Autorickshaws and cars can no longer drive down to the main gate of the hospital on Panchkuyian Road, which is why the patients (unaware of the alternative gate) try to walk down to the entrance or carry the patients in their arms along the narrow passage between the Metro barricades.

"We have seen heart patients succumbing to their escorts' inability to tear through the crowd and carry them to the emergency room in time. Women have delivered babies on the broken road close to the non-functional urinal", laments Mahajan. "We ourselves have tried hard to take many patients to the emergency. However, the sheer number of people walking along the narrow passage at any given time is enough not to let patients reach the emergency in time. We are totally shaken. We try to solve our own business problems and additionally we see the plight of common citizens like us near the hospital ... we feel totally broken and depressed".

The spot where the non-functional urinal is located is exactly the location where the Metro will surface on ground. "Even though the rain this season has been relatively less in Delhi, the road patched up by DMRC right in front of our shops broke down completely. In fact we asked them if the running Metro train will be as substandard as their material and method of working. They laughed it away saying that a lot of money has been invested in the project. As far as we are concerned, the DMRC specializes only in inefficient investment of money," offers Mahajan.

More than the threats of displacement and loss of business, the traders must also contend with a dent in their self-confidence. Whole-sellers like Mahajan are in a minority. This is primarily a retail market. Retail business has been seriously affected. Many traders have mortgaged their house to buy a new plot of land at a better location. They will simply have to abandon this piece of land granted by the government to their forefathers. "They're broken in spirit which is the greatest danger," says Mahajan.

The traders had also appealed to Jagmohan, the (previous) Member of Parliament from New Delhi constituency. However, his indifferent attitude hardly moved anything in their favour. Lately, they approached Ajay Maken, the new MP who appealed to Anjumani Ramdoss, Minister for Health and Family Welfare on their behalf. However, as in the past, they have not heard anything from any quarter. "The story is far from over. We have the feeling that the DMRC is just trying to keep us silent. They're winning time to finish off the construction. Once the Metro is up and running, they will do their best to uproot us. Again, we can only resort to guesses," says Mahajan.

The stench of the blocked urinal located close to the traders is seconded only by the reek of uncertainty in their life. The traders are waiting in their cramped shops - hoping for at least one definitive official word from any of the many ministries, corporations, commissions, MPs, ministers and demigods they have appealed to. While New Delhi continues with its ambitious development plans to make the capital a cosmopolitan city comparable to others across the globe, one can't help but wonder how superficial that effort is. The swanky exteriors it produces conceal so much that is wrong in the everyday lives of countless common citizens - an unjust, sad approach in which the means are only a minor distraction to the ends.

Varupi Jain works with German Technical Cooperation in New Delhi, and is a freelance journalist.