Keeping your child safe in the age of the Internet

It’s a big, bad world out there on the social network and a recent study finds nearly 73 percent of urban children aged 8 to 13 active on such sites. Supriya Unni Nair tries to understand the role of adult influencers in keeping the children safe online.
11 May 2015 -

In April 2015, news portal thenewsminute.com reported that a Kerala couple had shut down a Facebook page, titled "Kochu Sundarikal” (little beauties), after it was found to be a platform for paedophiles. The page creators had shrewdly circumvented Facebook's nudity clause by posting pictures of young girls and actresses fully clothed. However, comments revealed the nature of the page and the intention behind it.

Subsequently, news of another Tamil Facebook page was unveiled by the same portal. This one, titled “Chinna ponnu veriyargal” (Crazy about small girls), used the same tactic of posting fully clothed pictures of young girls, and was strewn with lewd status messages.

Indeed, as Internet usage becomes an unalienable part of urban Indian life, thousands of children across the country are now targets to new predators - from fake e-commerce sites to even worse, paedophiles.

The cases reported above also throw up the question whether parents know how safe a child, or even one’s photograph, is on the Internet. Concepts such as Internet ethics, cyber hygiene are Greek to most people just as dangers such as 'grooming'- building an emotional connection with a young person to later abuse them - are.

Rakshit Tandon, consultant, Internet and Mobile Association of India, (IAMAI) says, "Cases such as these just highlight the shocking levels of ignorance in India about the dangers of using the Internet. Abuse, bullying, fake e-commerce sites that offer cash on delivery for stolen products - there's a lot of misuse out there. And parents themselves are as ignorant as the children are."

According to a survey conducted in 2014 by the Associated Chambers of Commerce of India (Assocham), most underage kids on Facebook first got help from their parents to create their accounts. 75 percent of the parents of 8-13 year-olds on Facebook are aware of their child signing up for the site.  Many initially knowingly allow their children to lie about their age on social networking site. Nearly 82 percent helped create the child's account. 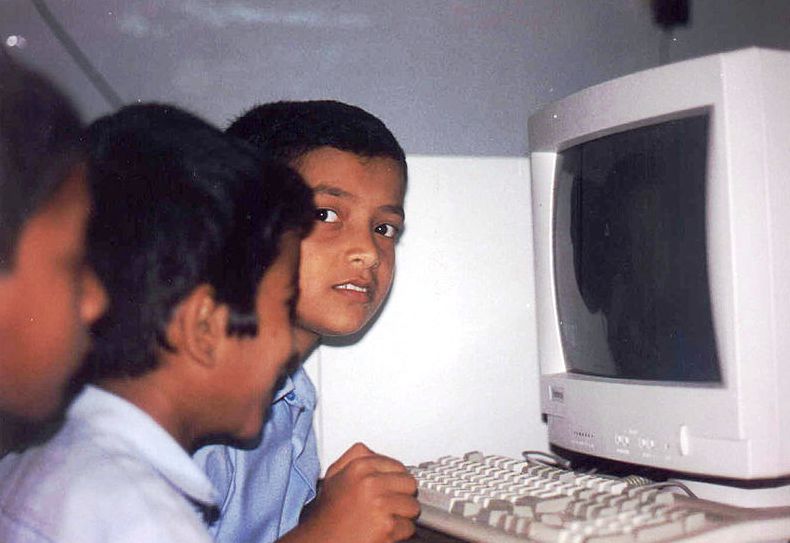 Using the Internet for a range of activities -- from homework to social metworking -- has become a norm for the urban Indian child. Pic: Frederick Noronha/Wikimedia

Although a majority of the 4200 parents surveyed believed that there should be a minimum age for Facebook, 78 percent said situations like school-related activities, communicating with friends make it ‘ok’ for their child to sign up for an online service, even if he or she does not meet the site\'s minimum age requirement.

While Facebook's official joining rule mandates a minimum age of 13 (as per the US' Children's Online Privacy Protection Act), nearly 73 percent of children in tier-I & tier-II Indian cities between the age group of 8 to 13 use Facebook and other social networking sites. Nearly 25 percent of 13-year-olds, 22 percent of 11-year-olds and 15 percent of 10-year-olds are on Facebook, while 5-10 percent of 8 & 9 year-olds are also active on the site.

According to the Assocham study, children mostly post images or videos of themselves online. Facebook is the most preferred social networking website for children between the ages of 8 and 13 years. Other popular sites including Flickr.com, Google plus, Pinterest and Snapchat are used by 85 percent of 10 to 16-year-olds.

News reports cite a survey by the Pediatric Academic Societies (PAS) in the USA showing that more than one-third of babies in that country tap on smartphones and tablets even before they learn to walk or talk, and by one year of age, one in seven toddlers uses devices for at least an hour a day.

"Most parents buy their kids expensive smartphones and tablets as a matter of status, to keep up with the Jones," says  Sree, a Kolkata-based teacher. "They have an ostrich like conviction that nothing will happen to my kids. In the event that something does happen, many cases are hushed up as well. Parents prioritise avoiding social stigma over reporting the crime to the police."

Anoop Narayanan, founder of the Mumbai-based law firm ANA Associates explains that India's cyber law, derived from the IT Act, 2000 was enacted  primarily to regulate and facilitate e-commerce. One of the most controversial provisions, section 66A - which resulted in arbitrary legal action and prosecution against people posting controversial or offensive comments on social media - was recently struck down by the Supreme Court of India in March after it came in for sharp criticism from various sections of civil society.

The annulment of  Section 66A was widely welcomed, as it had been mostly used to curtail freedom of speech, even in cases which were not prima facie offensive or controversial. Other than this, the IT Act deals with unauthorised use of computers/computer-related devices, hacking of computer systems, liability of network service providers, etc.

"The major concern in social media is about violation of privacy rights, defamation, and publication of false or illegal information and content. India does not have a privacy law as yet," says Narayanan.

"A comprehensive privacy legislation is an immediate requirement to regulate the issue of privacy violations in India. As regards other illegal activities on social media, India's criminal laws have adequate provisions, although implementation may be challenged depending on the nature of the cases. A specific legislation for handling cyber-crime with an efficient enforcement mechanism with trained personnel can address the issue, " he adds.

Narayanan also feels that the legislated enforcement mechanism should define and address all aspects of online and social media related offences. This will cover what constitutes an offence in the social/virtual media, who investigates such offences, what the technical and social aspects to be considered during the investigation are, how to handle the privacy of both the complainant and the offender, how to verify the authenticity of the complaint and the legal validity of the allegations, etc.

As cyber crimes need discreet and speedy investigation, the involvement of various agencies in different jurisdictions (especially when the server used in the crime is located outside India), a well-organised network managed by trained and experienced investigative professionals is a primary requirement.

"To start with, we must have sensitisation across society - among children, parents, police, judiciary, media. This is essential for the system to work," he says.

Incidentally, governmental units, private individuals, and corporates have already taken some steps in this regard. Gurgaon-based Rakshit Tandon has held workshops for the police and visited more than 5000 schools across the country in the same endeavour. "I firmly believe that cyber hygiene and Internet ethics should be part of the school curriculum for kids."

Chitra Varma, principal of DAV Matriculation Higher Secondary school, Chennai, agrees. "There's no question of keeping children away from the net. Nowadays, they need to use it even for school projects. But it is essential that they know of its dangers as well as its usefulness."

The Cyber Crime Division of the Karnataka police have launched an initiative to educate children in schools across urban and rural Bangalore on tips to use the internet. "We believe in prevention. We have undertaken seminars in schools, distributed pamphlets for parents. This kind of awareness is crucial," says Dr D C Rajappa, Superintendent of the Police Cyber Crime Division, who led the initiative.

Google, too, tied up with The Department of Electronics and Information and Technology and Computer Emergency Response Team-India (Cert-In) for an Internet Safety Campaign in India.  Head-Public Policy India at Google, Chetan Krishnaswamy explains, "It's important for the Internet to be a safe space for families to explore, learn and enjoy together. To enable this, we’re working to get the word out about good Internet practices and how to keep users safe online."

Ultimately, the issue boils down to a child's safety. Adult influencers - parents, relatives, and teachers should endeavour to thwart the dangers before they happen rather than rely on laws to punish the perverted.

A British Chevening scholar, Supriya Unni Nair is an independent writer with over 17 years of experience in print and national and international television media.