Narmada dams continue to roll over the rules

It is 23 years since the Indira Sagar project was cleared and 17 for the Omkareshwar dam, but in neither case is there a rehabilitation plan in place. The construction, however, continues. Kanchi Kohli reports.
15 February 2010 -

The movement against social and environmental impacts of the construction of the Sardar Sarovar Project (SSP) multipurpose dam project over the river Narmada is over two decades old. It has gone through its trajectory, with bitter and sweet experiences recorded in reams of paper and people's oral histories. Other than the SSP there are 30 other dams on the river, including the Indira Sagar and Omkareshwar projects under construction in Khargone and Khandwa districts of Madhya Pradesh. The dam projects are complemented by a criss-crossing network of irrigation canals.

The scale of the canal network of the two projects is immense - the length of the main Omkareshwar canal is 301 kms and that of the Indira Sagar 's main canal is 249 kms. They are and 100 and 110 meters wide respectively. In addition, there are branch canals, distributaries, minors, sub-minors and field channels. When the Indira Sagar and Omkareshwar canal projects were granted environmental clearance in 1987 and 1993, they came with a clear set of conditions. The construction of these projects and its canal networks should not have begun in Khandwa district of Madhya Pradesh till these conditions were complied with.

Two of these conditions were the preparation of a Command Area Development (CAD) plan and Rehabilitation Plan for each of these projects. A CAD plan is a must for any dam project and therefore the environmental clearances specifically mention such a plan must be prepared to avoid the negative impacts such as water logging and salinization leading to degradation and loss of land, which may not even be acquired for the purposes of the project. This plan should have been ready by December 1989 for ISP and March 1994 for the Omkareshwar Dam. With respect to the issue of Rehabilitation, the October 1993 letter for the Omkareshwar project explicitly states that the rehabilitation programme should be extended to landless labourers and people affected by the canal. For this, a time bound programme should have been submitted by the project authorities by December 1993. 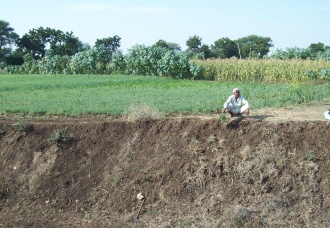 Even without the necessary permissions, the work on both the canals including excavating earth is ongoing.

•  Equal loss and compensation
•  But where are the canals?

It is 23 years since the Indira Sagar project was cleared and 17 for Omkareshwar, and even according to the Ministry of Environment and Forest's letter, neither of these plans are in place. Narmada Bachao Andolan (NBA), the longstanding people's movement, highlighted the fact to the concerned officials that the project authorities had begun the process of land acquisition to keep up with the increased pace to complete the project.

According to a petition filed by the NBA and locally affected people in the Madhya Pradesh High Court, the work on both the canals including excavating earth, anywhere from 20-50 feet deep, removal of top soil, and dividing agricultural fields is also on. This went along with the uprooting of trees, dumping heaps of rocks, stone and mountains of rubble on the adjacent land, pipelines, borewells, tubewells. Needless to say that the lives and livelihoods of the affected people of the area were affected, and has left them them looking for basic information on the project design. Without even a plan in place, there is no question of rehabilitation, but the work has begun anyway.

As the case was being heard in the High Court, the Ministry of Environment and Forests (MoEF), with its new Minister Jairam Ramesh, responded in writing to the cause. He wrote two letters on 6 August 2009 to the Chief Ministers of Gujarat and MP, the main states where the project construction is on. In this letter to Shivraj Singh Chouhan, Chief Minister of MP, he referred to the review by the Environmental Sub Group of the Narmada Control Authority on 24 April 2008.

This review revealed that there was major non-compliance with the conditions relating to the Indira Sagar Project, which included those related to the Catchment Area Treatment Plan-II, flora-fauna and carrying capacity, conservation of fisheries etc. The lack of implementation of the management plan for the downstream environment was also mentioned in the MoEF letter. Quite alarmingly, Jairam Ramesh stated that, though submergence has already commenced, issues related to notification of Protected Areas (Narmada National Park as well as Suryamaya and Omkareshwar Sanctuaries) have been under examination for the last 15 years.

The second letter was to Narendra Modi, Chief Minister of Gujarat. Here the Minister of Environment referred to the February 2009 report of the Independent Committee set up by the MoEF to review the work of the Narmada Control Authority. This committee was of the view that the NCA report of June 2008 includes backwater level calculated incorrectly, because it is based on limited data and calibrations. This is a violation of Narmada Water Dispute Tribunal Award, 1979 which the basic law governing not only the state-wise allotment of Narmada waters, rehabilitation of displaced families and he over-all monitoring and construction of Sardar Sarovar and other Narmada dams.

The canal-affected adivasis and farmers of Nimad, fearing destruction rather than benefits to their agriculture, petitioned the Court when according to them, no cognisance was visible on the ground. The case in the MP High Court proceeded amidst rigourous arguements. The High Court, in its final judgment on 11 November 2009, took note of the serious non-compliance of the conditions for the last 15-20 years. Taking a view that these network of canals are likely to have severe impacts on land, people and their livelihoods, the court stopped the ongoing construction till the CAD and Rehabilitation Plans are put in place and approved. This is also subject to approval of the CAD plan for work on the canals.

The Government of Madhya Pradesh was not to take this as given, and immediately challenged the HC judgement before the Supreme Court in New Delhi. Here the government argued that the impacts of the canals would not be significant, and the families which will be impacted will also be benefiting from irrigation. Further the compensation paid to the people of the area is more than adequate, the government argued. The next hearing before the Supreme Court is on 16 February 2010.

The battle continues, inside the court room and outside, as an old and familiar tale now waves itself again. Repeatedly we have witnessed that governments pay only lip service to the terms of law and conditions for large infrastructure projects, usually allowing the 'development' to continue at all costs to affected families. The basic questions of accountability have remained elusive, as a result, for over 20 years.