The Court of Appeals in Philippines has recently passed an order, prohibiting field trials of GM Bt Brinjal. As the Indian government seeks to push through the BRAI Bill, Neha Saigal exposes its loopholes and argues why we should go the Philippines way.
10 June 2013 -

The introduction of the contentious Biotechnology Regulatory Authority of India (BRAI) Bill in the Lok Sabha in this Budget Session was a big blow to Indian democracy, people’s right to safe food and the future of sustainable farming in India. The BRAI bill was introduced and referred to the Standing Committee of Science and Technology and the Ministry of Environment and Forests, despite opposition for the last three years by all quarters of civil society and by many Members of Parliament.

The BRAI Bill was drafted in a secretive fashion with no opportunity for the general public to comment on a legislation which deals with something as important as the safety of our food. It provides for a centralised and narrow decision making process with no mechanism of consultation from the public which is against the spirit of democracy. It overrides the state government’s authority on health and agriculture and rules out any kind of involvement of the states in activities related to execution and monitoring of field trials of GM crops. In what can be seen as contradictory to the very spirit of the federal structure of the Indian Constitution, the Bill takes away all powers of the state governments to reject the introduction of any GMOs, including experimental releases through field trials, in their state. Moreover, it also denies the citizen his right to information by excluding it from the ambit of the RTI Act. 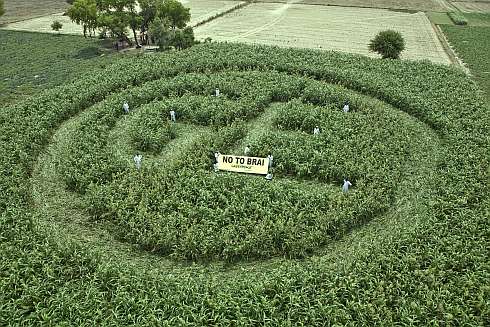 A crop circle created by Greenpeace on June 7 in Najafgarh near Delhi to generate public awareness against GM crops in India. Pic: Greenpeace / Sudhanshu Malhotra

The Bill has come under criticism not only for the lack of transparency that it engenders with regard to approval of genetically modified food crops, but also for an inherent conflict of interest as the Authority is proposed to be under the Ministry of Science and Technology, which also has a mandate to promote biotechnology. There is no intention or mention of the independent long term safety assessment of GM crops.

Under the procedures of the Bill, once an application for authorization is submitted to the relevant authority, this will be forwarded to the Risk Assessment Unit, which immediately embarks on a science based evaluation of risks associated, without even assessing if a GMO is at all needed or will bring any additional benefits under local circumstances and conditions.

•  Govt ignores adverse TEC Report
•  Where is the science in GM crops?

Even as the Indian government let its people down by placing corporate greed before public interest, there was good news from the Philippines as the Court of Appeals issued a Writ of Kalikasan on 17 May, ordering the Department of Environment and Natural Resources (DENR) and other concerned government agencies in Philippines to stop field trials of GM Bt Brinjal.

After failing to get it approved in India, Mahyco (Maharashtra Hybrid Seed Company), an Indian front of Monsanto had taken its Bt brinjal (with a proprietary bacterial gene from Monsanto) to the Philippines. This was met with stiff resistance from people's movements and scientists there.

The Writ of Kalikasan provided in Section 16, Article II of the Philippine Constitution provides for the protection of one’s right to a safe environment.Â  The Court of Appeals took this decision keeping in mind the constitutional right of every Filipino citizen to a healthy and balanced ecology. Greenpeace East Asia (Philippines) along with leading civil society organisations filed a petition in the Filipino Supreme Court last year seeking a writ of Kalikesan as they argued that the field trials of Bt brinjal were violating this constitutional right.

The Court of Appeal’s decision was based on the fact that there was no full scientific certainty as yet on the effects of Bt brinjal field trials on the environment and human health. This rings a bell of familiarity with every Indian citizen and takes us back to 9 February 2010, when the then Minister of Environment, Jairam Ramesh had taken a milestone decision to put a moratorium on Bt brinjal in India on similar grounds of lack of scientific information and public concern on GM crops.

A detailed look at the decision by the Court of Appeals to issue a Writ of Kalikasan should be a strong message to the Indian Government to withdraw the BRAI Bill, 2013. In the case of the Bt brinjal field trials in the Philippines, the petitioners stated that there was no proper consultation with the public and local communities. Further, there was no proper risk assessment and the only findings that were used as a basis to get clearance was Mahyco’s data of Bt brinjal in India. There was clear disregard of the precautionary principle by the Department of Environment and Natural Resources in giving clearances for these field trials. 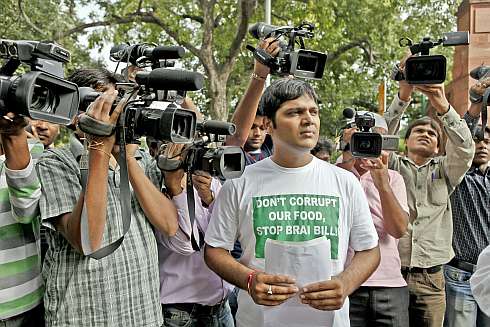 What’s wrong with the BRAI Bill?

The BRAI Bill similarly provides a single window clearance mechanism for GM crops in the country with a lack of accompanying mechanisms that would ensure transparency and public participation.

The BRAI Bill does not even scratch the surface to address the concerns on India’s regulatory system brought to the forefront by the nationwide debate on Bt Brinjal. It is silent on the questions of independent long term biosafety testing, or a needs-assessment to determine the need for such risky technologies and the availability of alternatives. Under the procedures of the Bill, once an application for authorization of research, transport, import, manufacture or use of GM products is submitted to the relevant authority, this will be forwarded to the Risk Assessment Unit, which immediately embarks on a science based evaluation of risks associated, without even assessing if a GMO is at all needed or will bring any additional benefits under local circumstances and conditions.

In all of this, it seems that it is imperative for the Indian government to take a cue from the Court’s order in the Philippines, and protect the Indian citizen’s constitutional “Right to Life” by taking a precautionary approach to GM crops, either through withdrawal of or comprehensive changes in the BRAI Bill.

Neha Saigal is a Sustainable Agriculture Campaigner with Greenpeace India.