As debates around genetically modified (GM) mustard pick up in India, Shalini Bhutani takes a look at the neglected diversity of the oilseed mustard crop on native farmers’ fields and points to the bias of the existing law.

Can the provisions on farmers’ rights in India’s intellectual property (IP) law on plant varieties help promote farmers’ varieties? While millions of people in India temper their daily diets with mustard oil and seeds, IP politics continues to temper the broader issue.

As of 3 June 2015, 54 applications for farmers’ varieties (FV) of Sarso were received (through 2010-2015) by the National Plant Authority in Delhi. The large number of varieties is evidence of the grassroots’ innovation in this crop. It also reflects the crop diversity that exists in the Indian fields. But if the government and the public sector do not promote these FVs, this diversity will continue to remain only on paper. Farmers would then have no incentive to continue to conserve and grow local varieties.

The Indian Protection of Plant Varieties and Farmers’ Rights (PPVFR) Act, 2001 Act defines a ‘farmer’s variety’ (FV) as that which has been traditionally cultivated and evolved by the farmers in their fields, or is a wild relative or land race or a variety about which the farmers possess common knowledge. According to the Act, an FV can be applied for by any farmer(s) or group of farmers or community of farmers claiming to be the breeder of the variety. The word extant meaning still in existence, by definition under the law [Section 2(j)] refers to those varieties that in India are either:

(i) notified under section 5 of the Seeds Act, 1966; or
(ii) farmers’ variety; or
(iii) a variety about which there is common knowledge; or
(iv) any other variety which is in public domain.

Indian Mustard was notified by the Ministry of Agriculture as a crop eligible for IP protection on 30 April 2010.The notification was issued by the Department of Agriculture & Cooperation (DAC) under the Indian law - Protection of Plant Varieties and Farmers’ Rights (PPVFR) Act, 2001. This implies that the National PPVFR Authority functioning under the Ministry was ready to receive applications for IP registration of varieties of Indian Mustard, both Sarso (Brassica juncea) and Karan Rai (Brassica kurinata).

Once a crop is so notified, there are time limits prescribed for the registration of farmers’ varieties (FV) and extant varieties (EV). FVs may be registered within five years after the date of crop notification. In other words, FVs of Sarso were eligible for plant variety protection (PVP) till 29 April 2015. Likewise, EVs can be registered up to three years after notification, which in this case means that they were eligible till 29 April 2013.

The PPVFR Rules, 2003, were specifically amended by the PPVFR (Second Amendment) Rules dated 27 October 2009 to notify these time-bound schedules. However, the amendment gives the Registrar the power to register FVs or EVs even after the expiry of the prescribed five and three years respectively, provided he records his reasons in writing.

New varieties (NV) of a notified crop may be registered at any time after a crop is so notified. There is no time limit prescribed for that. The NV however must conform to the criteria of ‘NDUS’ - novelty, distinctiveness, uniformity and stability.

When an application for such IP registration is accepted, the registrar issues a certificate of registration in the prescribed form. It is valid for six years in the case of crops. It may be reviewed and renewed upon payment of fees as fixed by the rules made in this regard. This is subject to the condition that the total period of validity shall not exceed fifteen years.

During the term of registration, the Act grants the breeder of the variety or his successor, his agent or licensee the exclusive right to produce, sell, market, distribute, import or export the registered variety. These are clearly a set of rights vis-à-vis the ‘formal’ seed market.

In the case of an extant variety, unless a breeder or his successor has established his right, the Central Government shall be deemed to be the owner of such right. In cases where such extant variety is notified for a state or any area thereof, the rights will accrue to the state government.

What this means is that if farmers choose not to seek IP on the varieties they have developed, or do not have the wherewithal to make an application to the PPVFR Authority, they are at risk of losing both credit for their innovation and any chance of receiving a share in benefits, if the variety is used for commercialization by someone else. 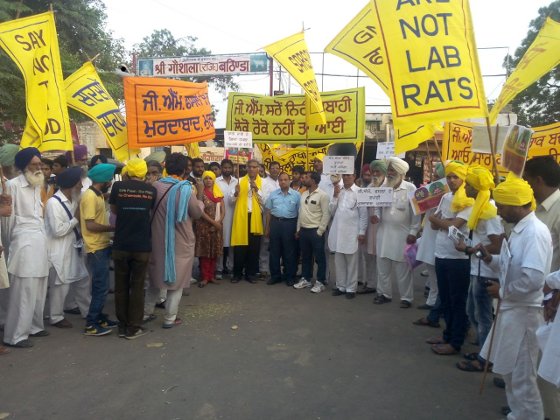 If one looks at recent data in the above context, two issues of significance emerge. First, within the window of time for registration of FVs of Indian Mustard, only one FV – Sitara Sringar, was granted the plant variety certificate (No.812 of 2014). It is that of Shri Hukum Singh Lodha from Village Sitara, Tehsil Kumher, District Bharatpur in Rajasthan.

Second, in sharp contrast to the single FV, a total of forty-six extant varieties have been registered under the Act and granted IP by the PPVFR Authority as of 31 March 2015. Most of these registered EVs belong to the ICAR and state agricultural universities (SAUs). One of these forty-six is the plant variety certificate (No. 350 of 2014) granted to Dhara Mustard Hybrid-1 (DMH-1) applied for jointly in 2013 by the National Dairy Development Board along with the University of Delhi, South Campus.

Private competition and the GM controversy

Let us now put this in larger perspective.

The seed industry obviously does not want competition from farmers. If a farmer-breeder develops a ‘new’ variety after five years, s/he too has to file for fresh registration under the category of new variety (NV) as a seed company would. Seed companies have applied for PVP for 25 varieties under the ‘new’ category, which are now being processed by the Authority.

Through 2013-2015 ten Indian Mustard varieties applied for by private seed companies were also granted PVP. In fact, the PVP certificates were granted beyond the cut-off date of 29 April 2013 for registration of extant varieties of Sarso, as shown by the table below based on data as of 3 June 2015:

Source:  Compiled by the author from data available on the PPVFR Authority web site

Mustard hybrids and the frenzy around their IP applications as detailed above gain greater significance in the context of the controversy around genetically modified (GM) crops in India.

A GM Brassica juncea mustard hybrid (DMH 11) has been developed by the Centre for Genetic Manipulation of Crop Plants (CGMCP), University of Delhi, South Campus. The mustard hybrid has reportedly completed Biosafety Research Level (BRL) II trials, which in the Indian biosafety regulatory parlance is the penultimate research stage, before the variety can be considered for commercial cultivation. The developers of this GM variety have applied for and been granted several patents on different aspects of this ‘invention’ both in India and the USA.

However, Section 29(3) of the PPVFR Act expressly excludes crop varieties with GURT or ‘terminator technology’ from IP protection. The Act classifies genetic use restriction technology (GURT) and terminator as a technology that is injurious to the life or health of human beings, animals or plants. It also clearly lays down that no variety of any genus or species that involves GURT will be registered.

Meanwhile, the go-slow by the Authority on the applications of FVs of Sarso can only be inferred as keeping at bay apparent competition for the hybrids and GM varieties waiting to be marketed both by the public and private sector.

In the light of the above, a number of key questions arise: