No, I will not give back my awards!

Two-time national award winner, veteran journalist Shoma A Chatterji explains with disarming honesty why, despite being deeply concerned over the prevailing socio-cultural milieu in the country, she would not like to blindly follow her celebrated co-awardees in returning the awards.

I am deeply disturbed by the prevailing climate of intolerance, the dominance of inhumanity and the violation of the very ideology that forms the foundation of democracy. I condemn the needless and insulting attack on the actor who has been ordered by a mouthpiece of the powers-that-be to go to Pakistan. I also condemn the other noted actor who is leading a campaign against those who are returning their awards. I wholeheartedly support all the intellectuals, artists and filmmakers who appear to be in a great hurry to give back their awards for I am no less anguished by the killing of M. M. Kalburgi in cold blood. And I congratulate Nainital-based noted historian Shekhar Pathak who has returned his Padmashri.

But I will not give back the two National Awards I won, or, the three prestigious fellowships I have been bestowed with, or the Sahitya Academy Award for Translation that I won within my liminal space over the past 25 years from different government agencies, ministries and institutions. I have won several awards from other private organizations too which will remain with me till I pass yonder because, the time, the socio-political climate, the situation when I won these awards and the eminent members of the jury were different. I cannot reconstruct that time nor resurrect or reverse it. 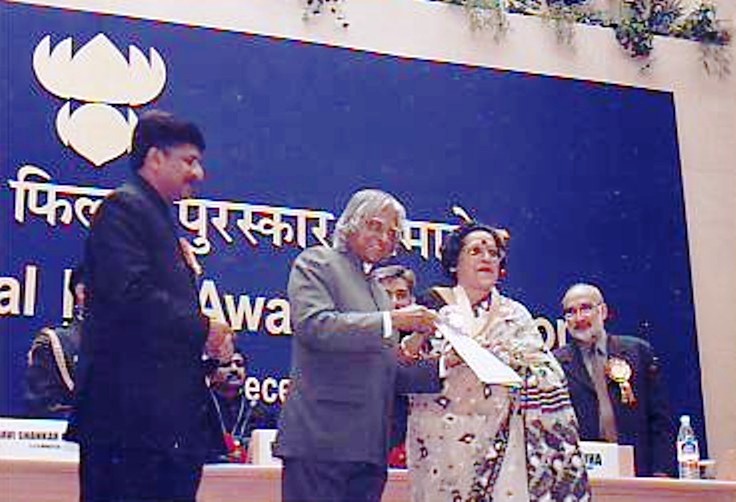 John Cramer, a physicist at the University of Washington believes that light particles can act in reverse time and he has compelling evidence behind his theory. But till today, pure science tells us that time cannot be reversed or reconstructed. The translation of time travel from idea to reality is yet to take place.

Dr. Ronald Mallet, currently researching time travel in the US, has not yet completed his research to convert concepts to concrete results. So when I cannot take myself back in time to those precise days, hours, minutes, seconds and nanoseconds when I proudly walked up to the proscenium of Siri Fort Auditorium to accept the two National Awards -- at two different points of time and from two revered presidents of India, namely R. Venkataraman (1991) and A.P.J. Abdul Kalam (2003) -- how can I return these awards, whom should I return them to and why?

These are simple questions I would appeal to every ordinary citizen of India who has won an award sponsored by any government agency or institution to ask himself/herself before deciding to follow celebrity award-winners who are unwittingly grabbing headline news they would hate to associate with everyday, ever since Nayantara Sahgal returned her Sahitya Academy Award.

I am not Nayantara Sahgal or Arundhati Roy or Ashok Vajpayee whose very act of returning an honour like the Sahitya Academy Award becomes an example for others to follow. They said they were protesting the “assault on right to freedom of both life and expression.” This triggered a chain of endless arguments between and among eminent people from different walks of life over whether the act of returning the award is right or wrong monitored by an anchor/moderator who appropriates every argument through the power of his/her decibel potent and arrogant attitude.

In her statement on returning her award, Arundhati Roy writes: “I am very pleased to have found (from somewhere way back in my past) a National Award that I can return, because it allows me to be a part of a political movement initiated by writers, filmmakers and academics in this country who have risen up against a kind of ideological viciousness and an assault on our collective IQ that will tear us apart and bury us very deep if we do not stand up to it now.”

But what of the millions of people who have never won these awards and so cannot return them? Does this mean that they are NOT a part of the “political movement initiated by writers, filmmakers and academics?” Are we not living in a democracy?  Isn’t this act of returning awards by writers, intellectuals, historians, scientists and film personalities creating the very kind of ghetto politics they are voicing their protest against? I am a part of this political movement entirely and back it with all my heart, but I do not think I need to prove it by returning these awards to the world out there.

The returning of the National Awards by filmmakers to support the striking students at the FTII almost appears as a chain reaction following the action of the Sahitya Academy award-winners, executed on second thought. It is too late in the day for them to demonstrate their support for the striking students of FTII. The students began their strike on 12 June this year. The filmmakers, as an extension of their solidarity to intellectuals and writers, began to return their National Awards in October. I do not wish to be a part of this snowballing effect by returning my awards.

Honestly, I am too ordinary a person who neither worked towards an award nor expected to win it when I did. Nor did I have any backing, political or otherwise. The greatest moment of my life is receiving the National Award for the Best Writing on Cinema (Best Book) jointly with Sharad Dutt, of Doordarshan from the then President A.P.J. Abdul Kalam who handed me the medal, the certificate and the cheque. I sincerely believe that returning this award amounts to rejecting it and thus, also insulting the man who handed it to me.

I do agree, however, that in a world where awards are bestowed left, right and centre by private organizations funded by political parties or sponsored by corporate houses, the value of awards has come down. Television channels, film magazines, corporate houses, media houses and even government agencies have frittered away the significance of awards they organize every other day, throwing awards in the air as if they are gas balloons and then, unsuspecting awardees jump to catch them and flaunt them as if their lives depend on them.

Recently, a state government instituted and gave away an award for “the best realtor” in the city! Dr. N. Bhaskara Rao in an article (26 April 2012) says these awards are public relation exercises and do not promote healthy competition. In this world where awards are literally given away or can be bought or influenced, awards from Sahitya Academy and the Ministry of Information and Broadcasting still stand out and will stand out till the Establishment takes over!

Coming back to the days when I accepted my awards, rape crimes, dowry deaths, communal killings, riots, mayhem, corruption, electoral rigging and scams were very much there even then. But we could eat what we wished to and were used to. We could express our feelings without fear or favour and we could walk up and accept awards that were untainted with backdoor politics or political influence or pressure and awarded for merit to completely anonymous people like myself.

Merit then was a pure word, not used within quotes. We could still be pleasantly surprised by awards when they were least expected, without trying to smell something in the air. So, when the awards came in this kind of ambience, the question of returning them does not arise.

I was anonymous then, I am anonymous now and I will remain anonymous till I pass yonder. I am a freelance journalist focussed on Indian cinema as the subject of my choice. I have been freelancing for 35 years. I can almost sense the derogatory look from hard core journalists who do investigative stories or interview the prime minister or are taken along on their foreign jaunts. They cover elections and follow internationally significant stories with skills, determination and commitment I probably lack. They are rich, famous and successful and not anonymous like I am.

If I were to return the awards, the media, even if it gets to know of it, would simply ignore it as a person trying to grab attention when no attention was coming her way. But that is not my intent, nor my point. My point is that giving back the awards will not really lead to a lessening of the violence and torture on minorities and Dalits and Muslims.

Raising a voice is both a human response and a democratic right. When one person raises his voice, it is protest. When the second person joins the first one, the first can become the leader but for the second one, it could be disguised competition. When many begin to follow, in gentle terms, it is ‘imitation’ and more blatantly, a ‘fashion statement.’