In Vidarbha, widowed women farmers have been hit hard by lack of viable farm credit. Quite a lot of women find themselves unable to carry out farm work in the absence of credit. Caught between fear and despair, their options are limited. Aparna Pallavi reports.
31 August 2007 -

The monsoon has been erratic in Vidarbha this year, appearing and disappearing without warning, playing truant for weeks and then coming back with unexpected fury. Farmers have been warily watching the skies, not just with their eyes, but their whole being. But for Kusumbai Waghmare of village Barshi Takli in Akola district, there is nothing to watch. Last year Kusumbai's family invested Rs.20,000 on their cotton crop, which got completely washed away in the floods. Before the measely harvest worth Rs.6000, her husband Shaligram Waghmare committed suicide. And this year all that is growing in Kusumbai's 2.5 acres of land is 'kukuda' grass.

"I have no money for sowing," says Kusumbai with despairing indifference, "My husband had already incurred a loan of Rs.40,000 which he could not pay back, and the bank had refused him any more credit. Now I do not know where to get more money." Kusumbai and her two grown-up daughters are now working as farm labourers. Her son is 14, still too young to take responsibility for the family's financial needs. "Maybe next year someone will be willing to lend me some money," says Kusumbai, "Maybe I can make some money if someone grazes their cattle on my land ..."

Mangala Akoth of the same village had paid off all her loans from the government aid she received after her husband committed suicide, and had even got a well dug on her land. One would think she is in a better position than others, but this year she has sown just one out of her five acres of land with cotton, using money borrowed from relatives. I can't cultivate my entire land," she explains, "I am scared to get a loan. The bank people harassed my husband so much he committed suicide. I somehow sowed this one acre, only because I need money for the education of my three school-going children."

In Lonwadi village in the neighbouring district of Buldhana, Mangala Mahadev Chimkar and Manorama Ashok Honade have also not been able to sow their lands this year, because of the lack of credit. In Bothbodan village in Yavatmal district, Babybai Vinod Rathod and Sampati Tarasingh Rathod are hoping that articles like this one will draw state attention to their plight, and they will be given some government aid for this year's sowing. 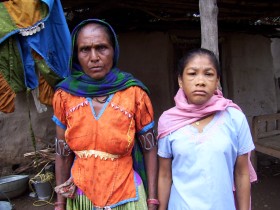 "I do not know how we will live if I can't get a crop," says a worried Sampati, "My daughter is ill, and her treatment costs me a lot of money. My son has five children to feed. At this moment we are all doing nothing, surviving on borrowed money. There is no work in my village. What worries me most is that if no help comes, my son may also commit suicide." Sampati has not been able to access credit this year because of the approximately Rs.50,000 in unpaid debts that her husband has left behind. "Who wants another loan anyway," she says, "It will only add to the burden. Why don't you tell the government to give me some aid?"

According to estimates, only about 30 per cent of farmers in Vidarbha have been able to access bank credit this year. And while no estimates have been drawn up in this regard, it is quite evident on the ground that widowed women farmers have been hit hard by lack of viable farm credit. Quite a lot of women are finding themselves unable to carry out farm work in the absence of credit, while others have not accessed credit at all.

"One thing that has to be understood clearly," says farmer-activist Gajanan Amdabadkar, who has for the last several years left his own twenty acres of land in the care of his wife Vijaya while he tours Vidarbha, collecting data on farmers' suicides, "That women do not see credit in the same way as men do. While a man sees what needs to be done and gets credit accordingly, a woman is more inclined to tailor her farming activities - even as she does her household - to the available budget, avoiding getting credit, especially government credit in the form of bank loans, as far as possible."

But official or not, credit is a must, and when it comes to women, access to any kind of credit is a highly insecure proposition. Most of the women I spoke with said that they relied on relatives - fathers, brothers, brothers-in-law - for credit. But as with official credit, this source can also have its limitations.

Saraswati Ambarwar of Tailang Takdi village, who has the dubious distinction of being the first recorded suicide widow in Vidarbha, says, "I dare not take a loan. Every year during the crop season I request my relatives to provide me with seeds and inputs, and after the crop comes, I pay them off. Every year my relatives tell me they will not help me next year. I have survived this way for ten years, but I don't know what I will do if they really stop helping."

Mangala Chimkar has failed to sow her land this year because her father, who was supplying her with credit, has not been able to help. "Since my husband committed suicide four years back, my father had been giving me money for sowing every year," she says, "But I have never been able to pay him back fully. This year my brothers put their foot down. I don't blame them. They are in a bad condition too ..."

"Every year my relatives tell me they will not help me next year. I have survived this way for ten years, but I don't know what I will do if they really stop helping."

Private credit is also a tricky affair. Outside the house of Kusum Mahadevrao Ingle of Kanheri Sarap village in Akola, we inadvertently run into a money lender. When he has left, Kusum tells us, "This man has been kind. After my husband committed suicide, he waived off Rs.5000 from what I owed him. But now he is not ready to trust me with credit. He can't trust a woman, he says."

The question of their futures hangs like the proverbial sword over the heads of these women. Failure to sow means no crop, which in turn has immense financial and livelihood implications. "I don't know, I don't know," says Babybai Rathod, "It is too much pressure, thinking about the future. At this moment I have to think of today. Many people's lands in my village are lying fallow this year. I will do what they do. I will see."

But even the luxury of despair is not allowed when there is a very real wolf to be kept from the door - not for very long anyway. There are mouths to be fed, especially young ones, and the women can wait and watch only so much before they must do something. Manorama Honade is already planning. "I will turn my two cows and one buffalo to graze in the field. I will save some money in fodder that way. Some others may want to graze their cattle in my field too. The household is dragging along somehow. I work as a labourer. My four children also go to the fields when they can. Next rains, next rains I will sow at least two acres (she has six in all). Not expensive stuff like cotton - maybe something for food. That will save some money at least ..." She prattles on with nervous energy.

Mangala Akoth is thinking in terms of food too. "I have planted cotton this year, but that is very expensive, and there is no saying if I will get good returns. Next year I will plant jowar and tur. That is less expensive, and safe. I will try to save some money this year. That way I can plant more acres. At least if I fall ill my children will not be hungry ..."

Aparna Pallavi is a journalist based in Nagpur, and writes on development issues. She is working on 'The Feminine Face of the Vidarbha Agrarian Crisis' under a National Foundation for India fellowship.