Eco-friendly disposable plates and bowls made from sheaths of the abundant areca nut plant in rural Assam hold great promise for a lucrative industry with global reach. Ratna Bharali Talukdar reports on the enterprise.

A pair of tamul and pan (betel or areca-nut and betel-leaf) always forms an intrinsic part of traditional Assamese culture - its rituals, festivals and even everyday life. However, no one could really come up with ideas to use this plant species optimally, apart from consuming its nut and leaves. That was so, till a group of youths in Barpeta district of lower Assam, under the guidance of Arindam Dasgupta, came up with the unique idea of making disposable plates and bowls from the mature sheaths of the areca-nut plant for commercial purposes.

‘Tambul Leaf Plates’- the disposable plates and bowls made by these youth are not only biodegradable and eco-friendly, but sport a high-end classy look and technology-friendly features such as microwave and refrigerator compatibility, thus earning rave reviews at the local, national and international markets of Canada, USA and Europe. The 2 to 3-millimetre thick plates and bowls are sturdy and light to carry. These plates also have the capacity to hold liquid or gravy items for several hours.

To ensure that the bio-degradable plates and bowls are hygienic and germ-free, the sheaths are washed with fresh water and are heated to around 100 degree centigrade temperatures before they are prepared for final shaping. Quality control is implemented at all three stages of raw material collection, production and finally, packaging. Only mature sheaths, those which naturally fall from the tree, are collected to make these products and thus there is no harm done to the original plant while collecting the raw-materials. 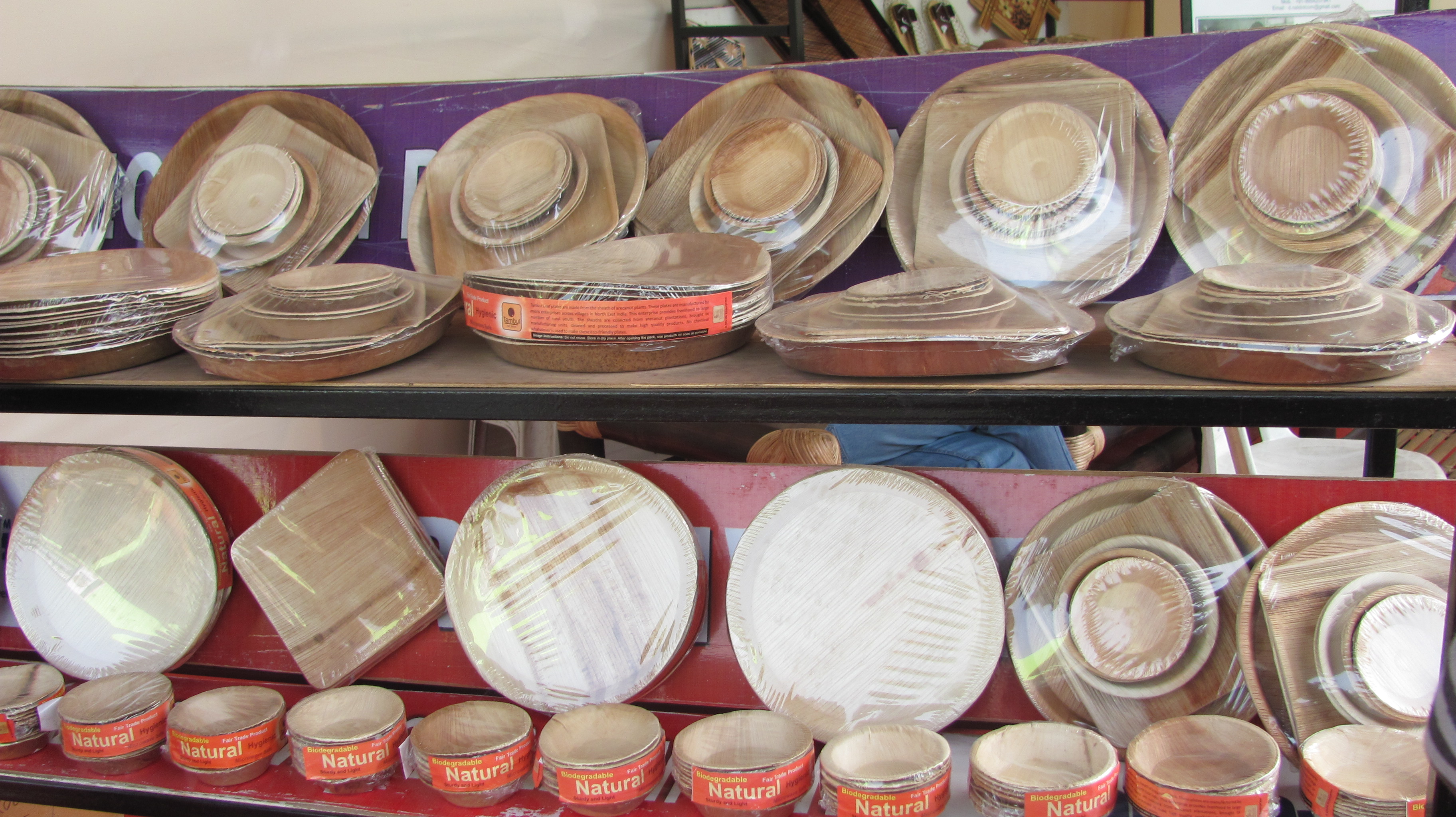 Plates and bowls made from areca nut sheaths and marketed by TPMC are kept on display. Pic: Ratna Bharali Talukdar

From vision to reality

There were various livelihood options before Arindam Dasgupta as he completed graduation in Economics from Kirori Mal College, New Delhi; yet, this young man decided to do something unusual, innovative and which could be based on locally available natural resources but with an eye on global horizons.

"Though Assam is enriched with such abundant natural resources, it suffers from economic backwardness and huge unemployment owing to lack of entrepreneurial skills and exposure among the people. This prompted me to take up a challenging task that would help me financially and also help these unemployed youth in rural areas,” says Arindam Dasgupta, the CEO of Tamul Plates Marketing Private Limited.

Dasgupta came to know from one of his friends that some groups in South India were already making disposable plates out of areca-nut sheaths. He was instantly attracted to the concept and further localised it in the context of Assam and the North-East.

Tamul or areca-nut forms a large part of commercial crop cultivation in Assam and in other parts of the north-east. In rural areas, it is mandatory to have some plants of areca-nut in every house. The state has over 75,000 hectare under commercial areca-nut cultivation, which in itself offers a huge potential granary of raw-materials. One just needs to pick them up from the ground with the leaf, where they fall upon maturing. Matured areca-nut, sold as supari in dried form in rural pockets, has a viable market in rural Assam. Further utilisation of mature sheaths for commercial purpose only adds to the income of the growers.

“These sheaths, abundant in the region were merely treated as waste,” points out Dasgupta, “I realised that some amount of value addition to this organic product was enough to enter an unexplored and commercially viable market.” That was 2005, and since then, there has been no looking back.

The young entrepreneur, who also went for further studies in Rural Management from the Xavier Institute of Management, Bhubaneswar, eventually went ahead with his mission by forming a non-government organisation ‘Dhriiti’ that undertook a project titled ‘Areca-nut Leaf Plate Manufacturing Cluster Development Project.’ The objective was to set up small manufacturing units of such plates and bowls made from areca-nut sheaths.

The constant efforts of Dasgupta and his team attracted overwhelming response within a short period, as village youth came forward in large numbers to set up such units. The organisation provided logistical support to these youth apart from training. The relatively low cost of setting up such units encouraged more and more among them to take up this venture.

In 2010, Dhriiti started the first full-fledged enterprise under its aegis, called the Tamul Plates Marketing Company (TPMC) which evolved into Tamul Plates Marketing Pvt. Ltd. The company involved its producers as partners in different districts to facilitate marketing and to make these products commercially sustainable. TPMC today produces over 4 lakh pieces of disposable plates and bowls a month with the direct involvement of 100 such village producers.

Each production unit provides employment opportunities to 20 young people, on an average.  A village producer can earn between Rs. 5000 and Rs. 10,000 a month, working for just three hours a day, while those employed in these units can earn an average income of Rs.4000 a month.

TPMC has been constantly working to improve storage facilities for the raw materials. “The peak season for collecting these mature sheaths is from April to June, which is also the high monsoon season and hence it becomes difficult to store them throughout the year because of the high degree of humidity in northeastern states,” says Dasgupta, as he talks of the efforts to improve storage for these sheaths. Better storage will enable producers to produce these plates and bowls throughout the year and will certainly help improve their economic conditions in the days to come.

TPMC also offers 100 per cent buy-back policy for its producers. Plates and bowls produced in village units are supplied to a centralised procurement facility of the TPMC, where quality control and packaging is done before they are transported for sale. TPMC has a chain of clientele throughout India and also abroad.

In view of the growing popularity of TPMC in rural areas and its huge success in involving rural youth in entrepreneurial projects and imparting relevant skills, the Department of Industry of the Assam Government has recently incorporated it in two of its major programmes - the Multi-Disciplinary Skill Development Programme and Mukhyamantrir Karmajyoti Achoni.

Explaining the huge scope of such eco-friendly industries, an optimistic Dasgupta says that despite its steep growth curve over such a short period, TPMC has not even been able to tap 5 percent of the raw material available in the state. Even if a mere 30 per cent of the raw material is tapped, it would enable the state to set up over 4,000 such small village units. With more and more youth involved in the venture, the industry has already been expanded to districts like Chirang, Baksa, Tinsukia and also to the border areas of Arunachal Pradesh and Meghalaya.

The cost per plate is Rs. 6 on average, which is nearly 20 per cent more than other plates available in the market. Yet, the demand for these products has been increasing by the day. The long term vision of TPMC is to make such plate manufacturing a 100-crore rural industry in North East India that would provide employment to thousands of rural youth, concludes an inspired Dasgupta.