The long arms of trade

As the countdown for the tenth Ministerial Conference of the WTO to be held in Nairobi, Kenya through 15-18 December commences, Shalini Bhutani emphasises the need for a cautious deliberation on how trade rules affect key sectors and all stakeholders.
04 November 2015 -

Global trade has real impacts on the lives, livelihoods and liberties of people and all else on Earth. Yet, only a handful of people engage in the making of trade rules, leaving the space open for trade negotiators, foreign diplomats and big businesses to set the terms.

The rules for global trade are currently made under the World Trade Organisation (WTO) and its agreements. The WTO succeeds the General Agreement on Tariffs and Trade (GATT 1948-1994), which was meant to bring peace and prosperity to the world post the Second World War.

We have seen two decades of the WTO (1995-2015). The Organisation celebrated twenty years at a Public Forum in early October held at its Secretariat in Geneva on the theme “Trade Works”.

The question that squarely needs to be asked now is “For whom is trade really working?” 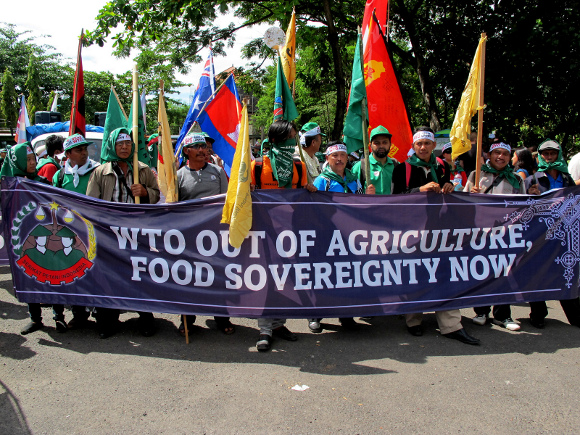 People's protest at the Ninth Ministerial Conference of the WTO at Bali, Indonesia, 2013. Pic: Benny Kuruvilla

The need to launch the WTO’s Doha Development Round (DDR) of trade talks in 2001 arose from the fact that trade rules were not working for the developing world.

Even though the task of correcting imbalances in the DDR itself remains, the DDR must neither be abandoned, nor its developmental goals diluted by any new expanded agenda for trade.

The US & EU have instead asked India and China to ‘recalibrate’ the Doha mandate, which could open the gates to issues that have been kept at bay thus far since 1996. Four issues had been introduced in the WTO agenda by the developed countries at the First Ministerial Conference held in Singapore in December 1996, namely trade and investment, trade and competition policy, transparency in government procurement, and trade facilitation.

If the WTO is to stay relevant to the world, and not simply for trade, then it has to factor in the needs of those countries with either a medium or low human development index.

Moreover, the multilateralism that WTO purports to offer has to be an effective counter-balance to the several plurilateral negotiations and bilateral treaties that are being negotiated outside the WTO.

The new generation mega free trade agreements (FTAs) and bilateral investment treaties (BITs) go much beyond what the current WTO rules require and give much less policy space to developing countries. Both within the WTO and in the universe of trade treaties emerging outside it, sector-specific concerns must be addressed, for there is a lot at stake.

Trade rules in the manufacturing sector have a direct impact on jobs, incomes and labour rights. WTO negotiations to increase market access for industrial goods take place under the Non-agricultural Market Access (NAMA), where the base text is the Revised Draft Modalities Text (Rev.3) of 2008.

The industrial goods covered include fuels and mining products, fish and fish products, as well as forestry products. India is part of the NAMA-11 group of countries who would face job cuts by tariff reductions. For countries like India, market access issues under NAMA negotiations must be addressed from a holistic point of view and not with a mere focus on tariff liberalisation.

India has reminded WTO members of the mandate in paragraph 16 of the Doha Declaration, which stresses that the negotiations must take into account the special needs and interests of developing and least-developed country participants, including concessions for less than full reciprocity in reduction of tariffs commitments.

Meanwhile trade unionists have been voicing their concerns on NAMA texts.

Services are the backbone of our societies and economies. Services liberalisation impacts ordinary people’s access to essential services such as education, water and energy.

The General Agreement on Trade in Services (GATS) is one of the most far-reaching agreements of the WTO. Yet, given the lack of momentum in this area at the multilateral level, due largely to the dominant point of view of the developed countries, services liberalisation is being pushed autonomously and through FTAs/BITs.

It is therefore critical that any further commitment on services at the WTO or at a bilateral-level be subject to a broad democratic scrutiny. There must be an immediate withdrawal of the ‘offer’ made by the Government of India (GoI) to the GATS Council in sectors such as higher education and public health.

WTO agreements in agriculture (AoA) and on intellectual property (TRIPS) have a direct bearing on seed sovereignty, farmers’ freedoms and the right to food. Agriculture is a critical livelihood for over 65 percent of Indian citizens, who are already in a highly vulnerable situation, as a result of various policy decisions taken since India signed onto the WTO in 1995.

Under the AoA, negotiations are restricted to tariff reductions, while the developed countries refuse to reduce their trade-distorting farm subsidies. Moreover, India needs to remain persistent in its quest for the ‘permanent solution’ on food security. There is a need to keep up the pressure on the domestic government to agree to the demands raised by farmers’ movements: Income Guarantee Act, increase in Minimum Support Prices and re-introduction of subsidies and incentives that promote agro-ecological food farming production.

The GoI must also insist on a genuine review of the WTO TRIPS Agreement and avoid going beyond it in its FTAs/BITs. To safeguard against ‘biopiracy’ in the South, the amendment of the TRIPS text proposed along with African and other countries must not fall off the agenda.

Similarly, IP rules adversely affect the access to affordable medicines. Tight IP rules that are ‘TRIPS-plus’, such as in copyright, plant varieties and data exclusivity, also have serious implications in the area of arts, education and for seed and agro-chemicals.

Any expansion in the volume of global trade and a free run to domestic and foreign investors to access raw materials will come at a cost to the planet and only exacerbate the problem of the climate crisis. This will have serious implications for environmental protection, ecosystems conservation and local peoples’ control over natural resources.

Outside the WTO, environmental goods have themselves become the subject matter of free trade. Trade negotiations (launched in 2014) on an Environmental Goods Agreement (EGA) are ongoing between 17 WTO members, including China, Japan, USA & EU.

Till the EGA addresses non-tariff barriers and other issues, it will stay unattractive to developing countries, which might not have easy access to green technologies.

WTO has emerged as a forum for global economic governance. This denationalises decision making and limits domestic policy space for national governments.

Within India, trade policy-making itself continues to be opaque, especially in case of FTAs and BITs. For the first time this year a new model of BIT text been made public for comments.

But generally the negotiating texts (as with the Regional Comprehensive Economic Partnership) are secret, consultations with affected groups are limited to the big industry bodies, and there are no publicly available impact assessment studies especially from a human rights or development perspective.

There is neither parliamentary monitoring, nor consultation with state governments. People must urge that the government open up the process to form credible positions before it engages in talks over either the WTO or the FTA/BITs. The rule-making processes on trade are not accessible to many. Those most affected must not be sacrificed at the altar of trade.

The Tenth Ministerial Conference (MC10) of the WTO is to be held in Nairobi, Kenya through 15-18 December 2015 in the backdrop of a deepening global macro-economic and developmental crisis. The agenda of the MC10 must recognise the actual and potential adverse impacts of trade.

The work ahead at this multilateral trade forum must be oriented towards making a positive contribution to the real developmental needs of disadvantaged populations and local communities, irrespective of where they are in the globe.

India and the 160 other governments that are members of the WTO must do an honest assessment of the two decades of the body, and collectively determine its future course. We need to be aware that trade rules are at work in all aspects of our lives and they do not treat all on equal terms.

The points raised in this article have emerged from different discussions and events co-organised by the Forum Against FTAs during the last few weeks with people's groups and concerned stakeholders across India.