The first true BRT in India

The international public transport community defines bus rapid transit (BRT) as "a flexible, rubber-tired form of rapid transit that combines stations, vehicles, services, running ways and [intelligent transportation systems] elements into an integrated system with strong identity" (TCRP Report 90, "Bus Rapid Transit - Volume 2: Implementation Guidelines," 2003). Janmarg, Ahmedabad's BRT system meets most of the highest standards applied internationally. It is already a "best practice" of BRT in South Asia, and is in sharp contrast to the bus corridors in operation in Delhi and Pune. 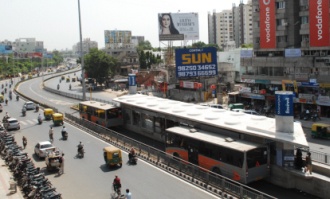 When we first reviewed it, the system was still in an early-operational state. The system was being operated through paper tickets issued at the gate. The usage was high. The system was carrying 20,000 passengers per day in 18 buses. Another 14 were on its way. There were still elements to improve, which include completing details in the road and at the stations. The bicycles lanes need to be cleaned of the debris and the footpaths still needed finishing touches. Pedestrian crossings at the far side of the stations did not have adequate signals, and the signaling system was not integrated yet.

A need for permanent maintenance is still evident. For instance, several bollards to control motor vehicles in pedestrian crossings were damaged. Also, fare collection, central control and dispatch, and variable message signs at stations, were not yet operational. However, most of the missing elements were in the process of being completed.

When fully realised, the system is expected to achieve high user acceptance, reduce total travel time for system users, and provide reliable and comfortable services, with very low costs compared to rail alternatives with similar performance. It also brings the opportunity to reduce harmful local and global emissions, increase the safety and security of the corridor, and improve opportunities for orderly urban development.

To realise all these benefits, the implementation needs to be carried out as planned. It is also necessary to set up a quality improvement program, which measures system performance and provides input to continuous improvement. Given the careful planning and implementation, it is expected that the system will be a great success, and a great example for other applications in India and beyond.

Any successful BRT system is the result of strong leadership, in this case, demonstrated by I P Gautam, the municipal commissioner of the Ahmedabad Municipal Corporation. He says that Janmarg "focuses on moving people, not traffic," according to a recent news article. It also involves adequate coordination among stakeholders, and good technical planning and careful implementation, achieved with the support from the Centre for Environmental Planning and Technology (CEPT) and the Institute for Transportation and Development Policy (ITDP).

The systems approach, which combines infrastructure, vehicles, operations, technologies and user education, creates a seamless implementation process. Quality assurance through performance monitoring will bring permanent service improvements and is the next step after completing the infrastructure details. As a result of the systematic and complete consideration of all the dimensions of a full BRT, Janmarg is in the process of becoming "a high quality public transport system, oriented to the user that offers fast, comfortable and low cost urban mobility," notes the BRT Planning Guide, ITDP/GTZ, 2007.

Initial planning for the BRTS started in Ahmedabad in 2005. It's taken four years to inaugurate the first 12 kms. There were a lot of hurdles to overcome during design and planning. Now that they have been scaled, and there is a general acceptance to the concept things have begun to move faster. If the rest of the work moves as per schedule, the city would have completed 58 kms as part of phase I by end of 2010, and 88 kms by 2013. 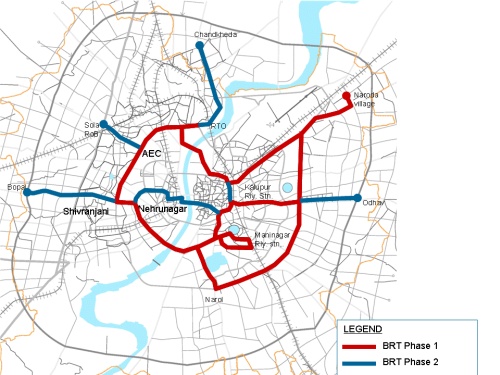 Janmarg - in Phase I and II

And what did these 88 kms of BRT cost? The road infrastructure cost was Rs.8.5 crores per km. There is a planned 4.5 km elevated bus-only section around the central railway station which will cost Rs.29 crores per km. The total project cost is Rs.400 crores. Herein lies a big lesson for all Indian cities. With increasing motorisation, traffic congestion is increasing. It is important to understand there is no "solution" to traffic jams. What you can solve is the mobility problems faced by the people. And the only way to do it is to build large mass transport systems in a short period of time. Only BRT provides that option, not Metro.

And this is the real lesson from Janmarg - investments in bus-based solutions are far cheaper and more quickly turned into value than the money spent on Metros. Ahmedabad leads the way in showing this off, even as Mumbai and Bangalore have been struggling over 10 years to build the first few kilometers on new mass rapid transport.