The Indian World Cup bid that you haven’t heard of!

For the first time ever, an Indian team will be flying to London to stake its claim in the Under-23 Ultimate Frisbee World Championships. Lavanya Donthamshetty has more on this remarkable sport and how the Indian team came together.
16 June 2015 -

When was the last time you picked up a disc (or a frisbee, as it is known to us plebians?) and played a game? Did you successfully throw it at your partner and catch it when it was returned to you? Did you, like Zahra, think there will be nets involved, rather like volleyball and badminton?

Zahra Kheraluwala, the captain of the Indian Under-23 Mixed Team that is competing in the World Championships in London in July, had not touched a frisbee since her school days and it was pure chance that she even heard of the game. It all started for her when a college friend mentioned 'Ultimate' and a curious Zahra decided to trek to the Elliot's Beach where it was happening and see what the fuss was all about.

Four years later, she is at the helm of the raggle-taggle bunch of youngsters, most of them on their first ever trip abroad, all of them eager to play for the country.

Not really! Ultimate, to call it by its proper name, is a serious sport, played across the world, on different surfaces – beach, hard ground, grass. As a proper sport, Ultimate began in the US five decades back but gained a solid foothold in India only eight years back.

Manu Karan, who played it during his stay in the US, is credited with bringing it to the country and to his hometown, Chennai, in particular. Today, Chennai has one of the largest Ultimate communities in the country, with more than seven local teams playing the sport, while other cities such as Bangalore, Delhi, Surat, Mumbai, Ahmedabad show strong following as well.

Ultimate is a sport of many unique features. It is a limited contact sport and men and women play together in one team. There are no referees or umpires looking over their shoulders; the players gauge and rate themselves and others based on the “spirit” or the fairness of their game.

The spirit in which the game has been played, in fact, is the biggest criteria of a good game and a “spirit circle”, convened at the completion of every game wherein the game with all its pluses and negatives are thrashed out, is a huge part of the game.

It is also a sport that receives next to no sponsorship, relying on the player to fund his own way through. One might think this means that only the well heeled play the game. Wrong! Case in point: the Under23 team that is soon winging its way to London.

Less than 30 percent of the team would have been able to fly out if it had been on their own steam; but everyone is, thanks to some creative funding efforts and the generosity of the greater community, according to assistant coach and one of the game's hardcore players, Abhinav Vinayak Shankar.

Abhi, as he is known to his U23 wards, is passionate about the sport and has been instrumental in setting up Chakraa, the first Chennai Ultimate team. He is a part of the Advisory Board of the Ultimate Players Association of India (UPAI) and, as one of the three assistant coaches, put his heart and soul into developing the team fit and ready for the biggest tournament of their lives.  His face lights up when he starts talking about Ultimate and he readily describes the journey of the Under 23 team so far.

“We started off with 125 youngsters. Usually, the first question when putting your name for the team is whether you can afford it. But for the first time, that was not of consideration. Ability to play and ability to learn, to grow, those were more important. From 125, we had various tryouts before we arrived at our final line-up. After we selected the team proper, we had our first all-India training camp in October; then another in January. Overall, we have had four camps so far with two to go [before flying out], as well as numerous training sessions that take place in each of the cities where the players live.”

The team captain Zahra, a Fine Arts major, is thrilled about representing her country, especially as she is following in her mother's footsteps; mum has, after all, represented India in the Asian Games! She is fluent in Tamil (though the others crack up when she starts speaking in that language!), English, Hindi and Gujarati – which is a definite asset for this pan-Indian team that has players speaking either Gujarati, Tamil or Hindi as their primary language of communication.

Sumesh, one of the two vice-captains, is a shining example of how Ultimate breaches barriers and successfully fosters a sense of community. A local “Bessie” boy that played with his mates on the Besant Nagar beach, the same beach that is the playing ground of the Chennai Ultimate community, Sumesh heard of the word “Ultimate” when he was 15.

“My friends and I were just your regular Joes, bumming around aimlessly, without any ambitions or aspiration. One day, we heard about Ultimate and saw some people tossing a disc back and forth on the beach. Where we live, we only play cricket, or maybe football. This looked totally different and we walked closer. One of the players urged us to come and join in the game. We did, got hooked and here I am!” he says in wonder.

No one in his family has even owned a passport; for Sumesh to possess one and journey over the high seas was beyond anyone's wildest expectations. “When people hear my story, especially the kids from my neighbourhood, they get super excited. The 11- and 12-year-olds are all getting into it now, declaring they will all be flying abroad to play Ultimate very soon!”

“The team is full of youngsters like Sumesh,” adds Abhinav, “Kids from under-privileged backgrounds who are now finding a singular purpose and focus, thanks to the sport. Of course, this also brings a unique set of challenges and circumstances with it.”

For example, one of their training camps was held in Surat and the team had to go by train, that being the cheapest mode of travel. One of the boys had an RAC ticket that got confirmed only from a particular station, a good way from Surat. “Have you travelled in Second class, in unreserved compartment no less, recently? It was.... interesting!”, Abhinav finishes with a laugh.

Ultimate is unique in that the teams play as mixed teams – both men and women play together, generally in a 5:2 or preferably, in a 4:3 ratio. Sumesh, who was quite shy to start off with, was struck by the concept of girls and boys playing the game together. Playing together as a team and the spirit this fosters has actually helped him respect the girls as his peers and be more comfortable hanging out with them. 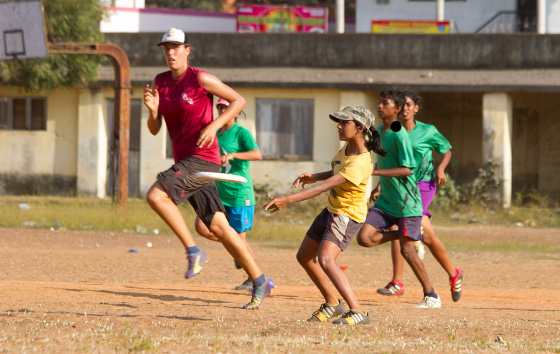 Another unique aspect of the game is that players of different nationality play together. Vice-captain Sabine Mannherz is German by birth but a Chennai resident for the past 8 months, where she is working with an NGO. A passionate player, she is seen regularly on the beach, tossing the disc with the locals and having a banter. Today, after a special dispensation from the governing bodies of the game, she is all set to go to London with the Indian Under-23 team.

But doesn't it feel strange to play against her own country? “No, not really! I live here now and I love the game and I get to play it at the International stage. That's all that matters!” says Sabine.

Managing the economics and logistics

Because of how it came about and how it was set up, Ultimate can be a “every man for himself” kind of game. At the recently concluded WCBU 2015 World Championship in Dubai, which was played on the beaches, three Indian teams participated in as many categories and they each managed their own passage and team training schedules. Not so for the World Championships in London (which will be played on grass fields).

For the first time in Indian Ultimate history, there is a huge number of people involved – apart from players, there's a head coach, three assistant coaches, as well as an organising team that has handled everything from collecting sponsorship for the players' cleats to booking tickets to London.

“They basically told us – you guys just go out and play, we'll handle all the details”, says Zahra. “This has actually helped us to concentrate on the game and improve it, rather than worry about the nitty gritty. In fact, the training camps and the detailed schedules each of us were given have all helped enormously in bringing us together as a unit.”

That is something they certainly needed, considering the fact that the team is scattered all over the country, across the Ultimate-playing centres. The Under 23 team has players from Chennai, Bangalore, Auroville, Ahmedabad, Surat, Mumbai and Delhi. The six training camps held in the different cities helped hone their abilities and bring them all together as a cohesive unit. The week-long Surat training camp played an especially important part, say Zahra and Sabine.

“For a whole week, we lived together, ate together, played together and spent every single minute in each other's company. That helped hugely as at the beginning, we were all hanging out with our own groups, with our own local teams. By the end of the camp, we had all gelled as a team and begun considering each other, truly, as team mates.”

“At first, it was tough to view them as anything other than our opponents,” adds Sumesh. “After all, we have played against their teams before and to suddenly stop thinking of them as opponents and start thinking of them as our teammates was strange; but we are all friends now, all part of the same team.”

So what are their hopes for London, do they think they will win the Championships?

“One thing our coaches have been hammering into us right from day 1 was that winning is not the most important thing. Every single game is a learning process. Our training sessions, by nature, were process-oriented, not goal-oriented. Which was why, when we lost recently in the finals of the Mumbai Ultimate Open (MUO) 2015 to Delhi, we weren't heart broken; we just stepped back and saw what we learnt from that process and how we can use the lessons going forward,” states Zahra firmly.

“And the lessons we learn will definitely help those that come to play the game after us!” finishes Sumesh with conviction.

There is a palpable sense of excitement in these youngsters, in playing for the country at the highest levels of the game. They have all come a long way together and have a long way yet. Here's wishing them a lot of luck and spirit. After all, that's what Ultimate is all about!

Lavanya Donthamshetty is a freelance writer based in Chennai.