Pushpa Achanta writes about the challenges and aspirations of people in Kashmir on Kashmiri Women’s Day of Resistance which is observed today (Feb 23rd).
23 February 2017 -

"He had completed his class X exams successfully and was preparing for the upcoming year. Since my husband passed away, he supported me emotionally and otherwise. Aged nearly 16 and being my oldest  child, he did household chores. However, one day, he did not return home. We did not hear from him despite trying hard. I still hope we will find him”, revealed a tearful Parveena Ahangar, the determined founder of Association of Parents of Disappeared Persons (APDP) in Kashmir, at a summit on Continuing Freedom Struggles in Bangalore, a few years ago. APDP launched in 1994, conducts a silent public sit-in demonstration in Srinagar on the 10th of every month.

“Disappeared” implies a young man (rarely a woman) who went missing suddenly and whose whereabouts remain unknown. In fact, the individual could be murdered or forcibly placed in a jail or location unfamiliar to him/her or his/her loved ones; whatever the age, occupation, marital status or physical condition. The “disappeared” person, if alive, is often prevented from contacting his/her loved ones.

In the 25-minute documentary Where Have You Hidden My New Moon Crescent by acclaimed filmmaker and activist Iffat Fatima, the late Mughal Mase, poignantly recalls her only son Nazir Teli, a teacher, who has been missing since 1990. After one screening (under police scrutiny and some public opposition) in Bangalore, of Khoon Diy Baraav (Blood Leaves its Trail), Fatima’s longer film on the lasting and traumatic impact of “enforced disappearances” on the corresponding families, Fatima noted, “Parveena and I have realized the significance of recording, showing and discussing these instances widely. Hence we try to go wherever we are invited for this cause, despite pertinent risks”.

If the missing men are married, their wives are termed “half-widows” - symbolizing their unique and unfortunate situation. They live in their marital household without remarriage , sometimes they are disowned by their marital family.

Owing to the efforts of Ehsas, a civil society group, six religious clerics decreed in December 2013 that Kashmir's "half-widows" could remarry if their husbands remained missing for four years after disappearance. However, some contentious aspects regarding inheritance and transfer of documents (needing a death certificate that is impossible due to the unrecognized death), validity of marriage if the first husband returns (which has never occurred), owing to taboos, religion, law and the government, typically prevent the lady from remarrying or having other relationships.

As per Buried Evidence, a report by the International People’s Tribunal on Human Rights and Justice in Indian-Administered Kashmir (IPTK), the involuntary disappearances and deaths  between 1989 and 2009 are estimated to exceed 8000 and 70,000 respectively. Investigation across 55 villages in Bandipora, Baramulla and Kupwara districts by APDP and IPTK between November 2006 and 2009 found 2700 mass graves, largely unmarked, with over 2900 bodies, mostly unidentified.

In the insightful documentary Kashmir’s Killing Fields, the courageous lawyer Parvez Imroz, who has been fighting for the human rights of Kashmiris relentlessly, highlights the issue of mass graves. Apparently, independent investigations by Imroz and his team and the State Human Rights Commission in additional places increased the mass grave count beyond 6000.

On the other hand, Jashn-e-Azadi (Festival of Freedom), a stirring film by Sanjay Kak on the battle for self-determination, exposes the brutality of the Indian army amidst the moving realities of commoners demanding their basic rights.

Tanveer Ajsi, a Kashmiri artist based in Bangalore for the last decade remarked, “Most protests that are noticed or publicized are from Lal Chowk in Srinagar. The peaceful resistance in the rural areas near Sopore (in Baramulla district where the Indian Army massacred over 50 men in 1993) and other towns get minimal attention. Also, the Gujjar and Bakarwal communities have been ignored and their language and culture is disappearing. Further, unemployment, poor financial and other resources cause anxiety and depression especially among the youth”. Tanveer believes listening to women in Kashmir is crucial as they are infrequently heard although women regularly protest the occupation and the excesses by the Indian army, since the draconian Armed Forces Special Powers Act (AFSPA) became effective there in 1990. The latter is notorious for rape, molestation, harassment, looting, destruction, abuse, torture and extrajudicial killings which are all mostly refuted and unpunished.

The brutal rape of around 40 women of various ages by soldiers of the 4 and 24 Rajputana Rifles regiment of the Indian army on February 23 1991 night in Kunan Poshpora, twin villages in Kupwara district, is unforgettable. Sadly but unsurprisingly, the Indian army and government denied these incidents although senior Kashmir state police officers who investigated the ghastly incidents initially, admitted their occurrence. Shockingly, a Press Council of India (PCI) team headed by renowned journalist, the late B.G. Verghese, that supposedly investigated the episode independently, also backed the army’s statement. However, the PCI team apparently never met the survivors and wrote its report from inside an Indian army camp.

Five women activists compiled interviews with the survivors and their families, over two years, in the book Do you remember Kunan Poshpora. The pertinent case was reopened after 50 women had filed a PIL in the Kashmir High Court in 2013 demanding justice for the Kunan Poshpora victims/survivors.

At a public discussion organized in Bengaluru, Essar Batool and Natasha Rather, two of the authors, mentioned how it was crucial that these narratives were documented and publicized despite its toughness for everyone involved. Fittingly, February-23 is observed as Kashmiri Women’s Day of Resistance in Kashmir and parts of the world including India, to express solidarity with the victims, survivors and their loved ones. 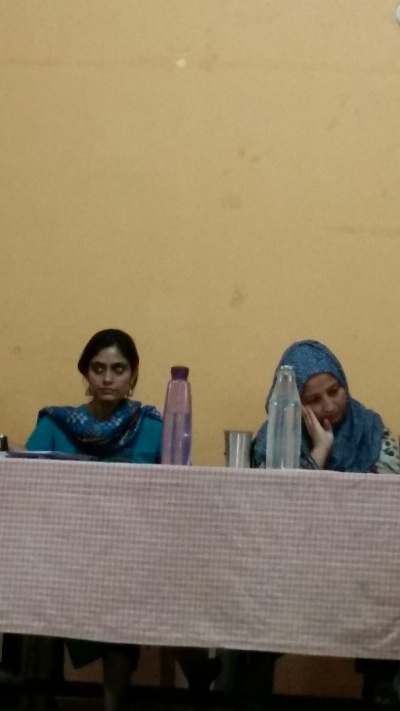 (L to R) Natasha Rather and Eassat Batool discussing their book Do you remember Kunan Poshpora with the audience. Pic: Pushpa Achanta

Similarly, the government and army deny that state agencies raped and murdered Asiya Jan and Neelofar Jan, aged 17 and 22 years respectively, in Shopian on 29th May 2009 although medical evidence and the location of their bodies proved otherwise. Such attitudes strengthen the resolve of Kashmiris to seek Azaadi or freedom from this country that cannot treat them as human beings with respect and compassion.

At an interactive exhibition of her intriguing art work held in Bangalore ( During the Harbour: Port of Kashmir series of events organised by the Karnataka for Kashmir Forum - KKF ), artist, legal researcher and activist Mahum Shabbir disclosed, “As a school girl in Delhi when I visited Kashmir during summer vacations, my teachers would request me for apples, saffron, dry fruits and shawls but hardly tried to learn about Kashmiris. I sculpt to express something. My art is open to interpretation”.

Mahum is among the members of the Jammu and Kashmir Coalition of Civil Society (JKCCS) who assisted the families of Asiya and Neelofar in demanding justice. JKCCS also secured the release of the detained teenaged girl molested in April 2016 at Handwara town of Kupwara district by an Indian army man from 21 Rashtriya Rifles. Mir Suhail, a cartoonist whose drawings were displayed alongside Mahum’s, mentioned, “I try responding to my environment. How many people in India know about the media gagging and periodic Internet blackout in Kashmir?” 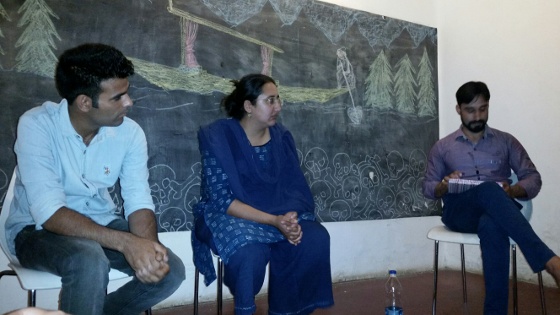 (L to R) Mir Suhail, Mahum Shabir and Tanveer Ajsi  at the interactive exihibition of their art work in Bangalore. Pic: Pushpa Achanta

Incidentally, JKCCS Programme Coordinator Khurram Parvez, aged 39 and chairperson of the Asian Federation Against Involuntary Disappearances, disabled during an IED blast in 2002, was released on 30th November 2016 from his 76-day long unlawful incarceration under the Public Safety Act. His arrest began a day after he was stopped from travelling to Geneva for a UN Human Rights Council session.

On the fallout of the killing of Burhan Wani in 2016, Ruhab Meer, a young law student from Srinagar who recently interned in Bangalore observed, “As people protested the killing of Burhan Wani in July 2016, amidst deaths (over 100 including children) and pellet injuries (to above 3000), schools and colleges were shut, affecting the conduct of classes and completion of lessons and associated activities. Some students who were wounded or traumatized or had affected family members, discontinued their education temporarily or permanently. However, the government did not postpone year end examinations proving its insensitivity. Though our family lost earnings owing to regular curfews, we coped because of some savings. Many people could not work or buy essential commodities owing to infirmities, fear, restricted movement et al. Also, I know people whose livelihoods were severely affected thereby impacting their and dependants’ survival. Who will compensate rehabilitate them? Can their lives, dignity and personhood be restored?”

Circumstances like the above have compelled many Kashmiris to migrate to other parts of India with their families. Among them is Peerzada Nusrat Ajaz, in his thirties, who worked in the travel industry in Chennai before moving to Europe. Yet, he longs to be in the place where he grew up and where a part of his family still is. Ajaz revealed, “We relocated within Kashmir as Indian Army soldiers harassed us because of misconceptions about our family, although my father and an uncle were police officers. That disturbed the schooling of my siblings and myself and ruined my aspirations. After that, we were compelled to move to southern India to ensure our safety and well being”.

“I was born and raised in Bangalore and work here now. My family migrated to the city more than two decades ago from Kashmir. Nevertheless, we visit our home town sometimes but are treated suspiciously. We cannot go outside easily and are asked for our local identification documents. But how can we have them when we do not live there?”, questioned Kaiser Deer, an entrepreneur of Kashmiri descent, in his twenties.

Sajad (name changed on request), a PhD student from Kashmir, in his twenties, currently in Hyderabad, said, "I came here to study as institutions of higher education are fewer in Kashmir. Although a few universities have been recently established there, thousands of students go to Aligarh, Jawaharlal Nehru University, Delhi University and other technical and non-technical institutes and universities in India". Asked about life in Kashmir, he mentioned that frisking, check posts, showing identity cards, crackdowns and Bandhs are normal.

At a public discussion, a young journalist from Kashmir who lives and works in Bangalore said, “Many of us desire autonomy from India and Pakistan. We want to ensure that our Pandit brethren can also return to Kashmir and we can live harmoniously and peacefully”. Tragically, such heartening wishes are barely known or fulfilled.

Pushpa Achanta is a Bangalore-based blogger, writer and trainer on development and human interest issues who enjoys penning verse, heritage walking, nature photography and mentoring youth. She is the lead author of a book titled Ripples: The Right to Water and Sanitation for Whom, published by the Indian Social Institute, Bangalore.