The abhorrent remarks by actor-turned-Trinamool MP Tapas Pal, stating that he would get the women among his opponents raped, have left many outraged but drawn mild reactions from his party and no legal action at all. Shoma Chatterji exposes the milieu where leaders like Pal enjoy complete impunity.
05 July 2014 -

West Bengal, Circa: 2014. It presents quite a contrast: from being the celluloid symbol of all that is innocent, naïve, simple and good in his earliest films Dadar Keerti, Bhalobasha Bhalobasha, Guru Dakshina and others, Tapas Pal has degenerated to a sad symbol for his party today. It has to be remembered, though, that he is just one among many who are loyally following the party’s agenda of unprovoked hate and violence across the state. Pal, who has acted in over 30 films, first became an MLA from the Alipore constituency in 2001 and was re-elected in 2006. In 2009, he won the Lok Sabha elections from Krishnanagar, and was re-elected this year.

In his now infamous hate speech at Chowmaha village in Tehatta in Nadia district, which falls in Pal’s parliamentary constituency of Krishnanagar, he boasted that he was not an MP, but rather a goonda of Chandannagar, who had indulged in a lot of rangbazi (rough-and-tough, macho games) in his time. He also said, among other unprintable invectives, that he would show his opponents his shoe and bent down to take off his shoe. 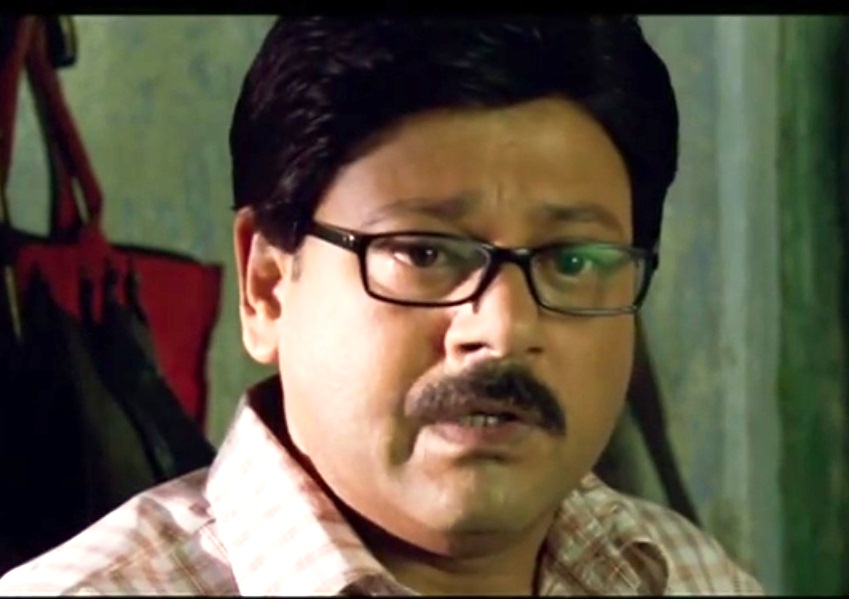 A still from a Tapas Pal film. Photo courtesy: Youtube

Paul issued repeated threats to his “opponents”, warning them “for the last time” that while he was in Krishnanagar, he would visit Chowmatha village every month and if he ever heard that any Trinamool supporter had been harmed, he would “not spare them”.

The crowd around him clapped loudly, understandably so since the people gathered were supporters of the “ruling” party. The clapping and cheering crowd translates into greater danger for the common man and woman because they are internalising and imbibing this culture of violence into their bloodstreams and their mindsets.

On the one hand, Pal openly threatens to send his ‘boys’ into the homes of the opposition to rape their women. On the other, he incites women (supporting his own party) to take their bonti (a device for chopping vegetables, culture-specific to the Bengali) to slit the throats of members of the opposition. That is Tapas Pal for you, a glittering symbol of the ‘poriborton’ (change) the present CM of West Bengal used as her party slogan. That much anticipated change has now translated into a reality that is scarier than a horror film unfolding in real time and place.

Sorry to disappoint you, Ma’m, but Pal was not talking under the influence of alcohol. He was perfectly sane. In fact, he delivered a similar hate speech at Gopinathpur and this too was posted across all news channels. He was playing to the fear psychosis, created and sustained in earlier CPM-dominated electorates, and following in the footsteps of his predecessors. He is a good follower of bad ways and therefore, can never qualify for leadership under the guise of an elected MP.

Unfortunately for the Chief Minister, all that her MP did or said was on camera, being played out right there on our television screens, which ruled out the possibility of a ‘shajano ghotona’ (fabricated event/tale) -- a habitual explanation by her for any untoward incident or anything that could embarrass the party. 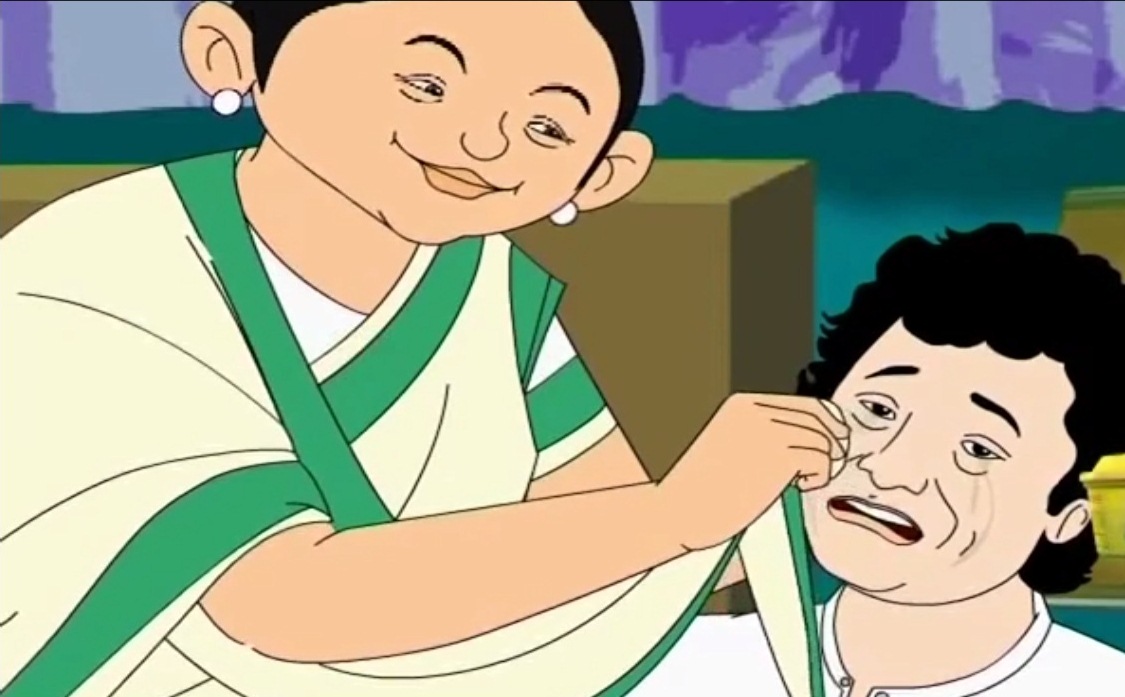 Pal retracted from his speech partially when he said that he never uttered the word ‘rape’ but exhorted his party men to ‘raid.’ Even if one were to accept that as the truth (which it is certainly not, as the video recording shows), one would like to ask, do party leaders and workers have the right to carry out a ‘raid’ in the house of innocent villagers? Can the MP order a raid without the go-ahead of the CM who is also the home minister and controls the police?

Besides, there is no intrinsic difference between ‘rape’ and ‘raid’ because the latter, in random cases as the hate-speech threatened, often implies the former, especially in an environment of political fear-mongering.

The leaders we have

As an actor, Tapas Pal needed to be a symbol of someone else and something else, which he may or may not have been in real life. That is what an actor’s work demands and there are no problems with that. But the minute he becomes an MP, he is responsible for everyone in his constituency. In fact, even his responsibility to the party that backed and chose him becomes secondary once the people elect him as their representative.

Pal and his mentors and supporters either do not know the distinction between party and government or deliberately look the other way, not only ignoring responsibility but also violating it in every possible way. Thus, two days after the furore over his speech, followed by his ‘official unconditional apology,’ he is seen standing on a dais beside Mamata Banerjee, laughing and waving his hands at a cheering audience after the General Party Meeting held on 2 July.

Moving on to the higher level of leadership, what stand did the CM take on the hate speech? Did she ask Pal to resign from the party and as MP? Did she penalise him in some other way? No, she did not for, that is not her style.

While some of her colleagues in the party initially hinted that she was outraged by Tapas’s statement, there was not a single word of castigation from her directly. Instead, in keeping with her normal strategy, she shifted the entire blame on media as public furore reached a peak.

Mamata accused media of buying video footage of every speech that her party workers and leaders make and warned the latter to “speak carefully and be careful of what they said.” She was outraged that the media buys video footage of speeches for sums reaching up to Rs. 1 lakh. But is that not what the media is supposed to do in a democracy where access to information is crucial for its health and where media functions as the fourth estate?

To be fair to Pal, however, he is not alone in his use of such language. Pal’s speech includes every indigenous and sophisticated weapon of attack that exists – axe, bonti, rifle, sickle, etc, except bombs, perhaps because that was already used by another party colleague, Anubrata Mandal (Birbhum district TMC president involved in a murder case) in his oratory.

Sagar Ghosh, father of Independent candidate Hriday Ghosh was murdered soon after Mandal’s provocative speech where he directly ordered his party men to “hurl bombs at the Opposition and set their houses on fire.” Incidentally, Mandal is one of the closest aides of the CM today.

In a recorded speech, Trinamool MLA from Labhpur, Manirul Islam boasted of having “trampled three persons.” Manirul is the parliamentary secretary of urban development though he hails from Nabagram village. Trinamool’s leader from Bankura, Arup Chakrabarty is also known to have urged party men to kill those who sneaked into their homes: “If anyone forcibly enters your hut, kill him, I will take care of you.”

Perhaps, the CM really cannot take any steps against Pal because if she does, then she must also take legal steps against Anubrata and Manirul, which she cannot afford to do.

Where law is subservient to politics

But even if we resign ourselves to the abysmal standards of leadership that we see around us, is there no provision in law that can be used to take action against the likes of Pal and Mandal?

According to Arunava Ghosh, a lawyer at the Calcutta High Court and Congress leader, police are empowered under Section 23 of the Indian Police Act, 1861, to take preemptive measures to prevent a person from making such a speech even without getting any complaint. “Abusive language used, motivating people to indulge in direct violence - this falls under Sections 218 and 219 of the IPC and the offender can be arrested and is in no way immune to the laws of the country,” says Ghosh.

Section 503 of the IPC states: “whoever threatens another with injury, reputation or property…commits criminal intimidation which carries a maximum jail term of two years.” High Court advocate Shamit Sanyal has filed a PIL on 1 July, urging the court to take strong steps against the ‘inflammatory and derogatory speech’ by any public representative.

Pal may also be charged under Section 117 of the Indian Penal Code and can be put behind bars for provoking rape and murder. According to Ghosh, “The  Constitution of India and its hate speech laws allow a citizen to seek the punishment of anyone who shows the citizen disrespect on grounds of religion, race, place of birth, residence, language, caste or community or any other ground whatsoever. The laws allow authorities to prohibit any means of expression which someone finds insulting. Article 19 gives all citizens the right to freedom of speech and expression, but subject to "reasonable restrictions" for preserving inter alia "public order, decency or morality."

Section 153A of the penal code says, inter alia:

But if such are the laws of the country, why is Tapas Pal still free? Why is the police so inactive? The answer is simple. The CM holds the home ministry portfolio too, so they must follow her orders.

One example of how the CM uses her clout will serve to substantiate this. Soon after the Jagadhhatri Puja immersions last year, (November 2013) officers at the Bhawanipur Police Station had arrested two Trinamool Party members for rioting, arson and ransacking the Bhowanipore police station.

Reportedly, the police had swung into action after the Trinamool men, along with a mob of 300, clashed with the policemen who had asked them not to burst high-decibel crackers late in the evening outside a cancer institute and a children's hospital. The CM flexed her muscles, barged into the police station, intervening on behalf of her party workers and ordering them to be set free!

There have been no strong demands for legal action against Pal or his detention from political opponents either, perhaps because no political party wants to set a precedence here given the skeletons in every cupboard. The latest on the Tapas Pal controversy comes from State BJP President Rahul Sinha, who has said that his party will request the Speaker to judge whether Pal has diminished the honour of the House by his remarks.

"We will send a CD of the speech by Tapas Pal to the Lok Sabha Speaker and request her to see whether an MP like Pal, who had made such derogatory and obscene comments, diminished the honour of the Lok Sabha," said Sinha

It would perhaps be fit to end with a quip on Twitter, a parody of a famous childhood nursery rhyme in Bengali:

Roughly translated, it means, “whoever beats you, catches you or abuses you, MP Tapal Pal will see to it that his cronies rape them (or theirs).”

But while some may still be in the mood to make light of the situation, many in the state are terrified of being ruled by self-proclaimed goondas. The people want flesh-and-blood human beings, leaders who have the courage to make a choice between the people they represent and the party, and not such sad symbols of hate and political degeneration.