The handling of sugar production, sale and external trade by the government shows a complete absence of strategic planning on an issue that critically affects the aam aadmi. Kannan Kasturi reports.

Sugar prices have doubled over the last 15 months. A severe shortfall in production is forcing massive sugar imports on India at a time when the world market prices are at a 28-year high. The government has laid the blame on a poor monsoon and the "cyclical nature of the sugar industry", factors that it presents as beyond its control. Curiously, a year ago, it was actually subsidising sugar exports. How has the situation changed so quickly? The facts need a closer look.

A few preliminaries are in order to better understand the sugar production cycle. Sugar cane has a long growth period - it stays in the field for 11 to 15 months. Cane crushing starts around October of every year and keeps the crushers occupied for up to 6 months. The accounting year in the context of sugar - the sugar season - is October to September.

The graphic below shows the area under sugar cane and the quantity of cane grown over the last few years (Figures for 2009-10 are estimates). Note the sharp dip of 12 per cent in acreage for the crop processed in 2008-09 on the back of a smaller dip the previous year. To make things worse, the cane production itself fell by around 20 per cent, indicating that in addition to lower acreage under cane plantation, there was also a lower yield in 2008-09 - attributed to less than perfect weather conditions in the sugar growing areas in 2008 even though the monsoon was an overall normal one. 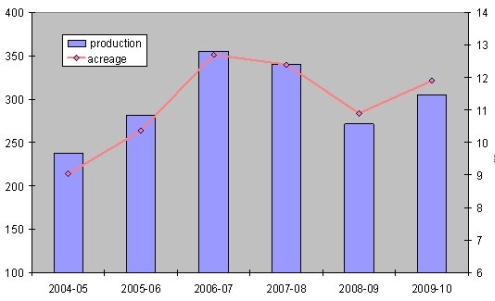 A portion of the sugar cane is also used to manufacture other sweeteners - gur (jaggery) and khandsari - and some is retained for seed. Thus, beyond growing cane, we must ask how much of this is used to produce sugar itself. In 2008-09, particularly, a larger part of the sugar cane was used for making gur than in earlier years. This exacerbated the sugar shortage; even though cane production that year saw only a 20 per cent drop from the previous season, sugar production tanked 43 per cent.

Why did farmers reduce the acreage under cane so dramatically? And why did they prefer to sell the cane to small scale gur units rather than to the sugar factories? We will return to these questions later. Before that, let's look at something else.

There is yet another dimension to the sugar crisis - trade policy. From 2006 onwards, India started exporting sugar first in anticipation of and then on the back of record sugar cane production. India's current sugar consumption is between 20-22 million tonnes, and this level was exceeded in 2006-07 and 2007-08. Initially prices in the world market were higher than Indian prices and the exporters were a happy lot. In 2007, the tide turned and world market prices fell.

But the central government continued to push exports by waiving taxes and providing a subsidy to exporters in the period April 2007 to Sept 2008. State governments also added their own subsidies to the central subsidy. In the 3 years 2006 thru 2008, a total of over 9.5 million tonnes of sugar were exported. The average price realisation of these exports in the period April 2007 to the end of 2008 was Rs.11,765/tonne for raw sugar, a price that is less than half the current international price of around Rs 24,000/tonne. 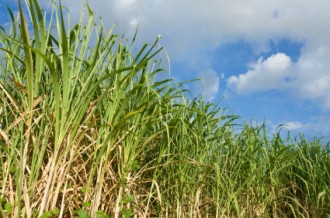 By February 2008, analysts were already predicting a sharp fall in 2008-09 sugar output based on fall in acreage under cane. But the government continued to allow massive exports.

This was not all. The government modified sugar cane control regulations in December 2007 to allow direct production of ethanol from sugar cane juice by sugar companies without any quantitative restrictions. Plans were also being made to mandate a 10 per cent (up from the current 5 per cent) blending of petrol with ethanol to absorb the expected ethanol production prompting Reliance and HPCL to acquire sugar mills for fuel production.

By February 2008, analysts were already predicting a sharp fall in 2008-09 sugar output based on fall in acreage under cane (See, for example, CRISIL's analysis at this link). Why then did the government allow further exports in the 2008 financial year, adding up to a massive 3.3 million tonnes? Why was sugar export actually subsidised by the government till September 2008, to be withdrawn only under pressure of WTO action from Australia and Thailand?

In early 2009, India began importing sugar. The spurt in prices in the world market is itself linked to the knowledge that India may have to import as much as 1/4th of its sugar requirements for 2009-10. Why were adequate reserves not built up in the years of overproduction - the buffer at the end of 2007-08 season was reportedly only 9 million tonnes - so that the country could tide over the bad year? If storage infrastructure was a problem, why was investment not guided into this infrastructure that would provide fantastic returns for the nation?

Moving away from sugar cane

Now let's return to the questions posed earlier on why farmers grew less cane and why they sold less of the cane grown to the sugar mills. Farmers in India have only one way to respond to the market - by reducing or increasing acreage of different crops. Farmers suffered during the years of good production - 2006 and 2007. They were turned away by sugar mills that refused to lift their cane. The Hindu reported in May 2007 the instance of 43 farmers who had committed suicide in Bidar district of Karnataka, most being sugarcane growers who were unable to sell their cane to the local sugar factories.

Even where the mills accepted their cane, farmers' dues were not cleared for months, in some cases years. In Uttar Pradesh alone, the government owed more than Rs.1500 crores to sugar cane farmers for previous season cane purchases at the start of the 2007-08 crushing season. The central government kept sugar prices depressed by keeping the statutory minimum price of sugarcane practically unaltered between Rs.80.25 and 81.18 per quintal, from 2006-07 to 2008-9. During the same period, the minimum support price of paddy was increased by 46 per cent. With the government forsaking them in this critical period, it was no surprise that farmers started turning away from sugar cane to other crops with better prospects.

The farmers' woes did not end even with lower production and supply. In UP, the sugar millers contested the price fixed by the state government for the 2008-09 cane in court, leading to a delayed start to the crushing season. A large number of sugar cane farmers in Uttarakhand and nearby areas of western UP sold their produce to small private gur units as the sugar mills had not paid them their dues on time. Gur manufacturers reportedly offered much higher prices than the millers. Millers in UP, the largest sugar producing state, now want a government regulation that will force cane farmers to sell their entire produce to the sugar mills for the 2009-10 season (Business Standard, August 25 2009). So much for a free market!

All this brings us to the present situation where the consumers are facing a runaway inflation in sugar prices with no respite in sight; the government has made the country hostage to international speculators in a sellers' market. But even as both the farmer and the consumer suffer, certain elements in the sugar processing and distribution chain are doing very well by themselves. The table below showing the increase in the stock price of some of the top listed sugar manufacturers is revealing.

The handling of sugar production, sale and external trade by the government at the very least shows a complete absence of strategic planning on an issue that critically affects the well being of the aam aadmi - perhaps a consequence of the prevailing economic philosophy that attaches low importance to food security and self sufficiency in agriculture. But worse still, the commissions and omissions of the government lend credence to the idea that policy decisions are timed to allow certain business elements to profiteer at the expense of the people of this country.