He has been an active proponent of activity-based science teaching for over 25 years. All along, he has also been translating exemplary works of world literature into Hindi and making them available at affordable prices. Currently, he is working on a unique children's science centre at the Inter-University Centre for Astronomy and Astrophysics, Pune. An engineer, a teacher, a toy-maker, a book-lover, a translator - there are just some of the ways to describe this man called Arvind Gupta. 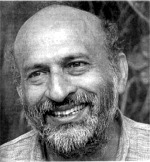 "I would like to be known as a tinkerer and a toy-maker," says this man of many avatars. An IIT Kanpur alumnus and a former TELCO employee, he has dedicated his life to demystifying the abstruse world of science for the comprehension of children. "Twenty-five years ago, I discovered that if children see a scientific principle incorporated into a toy, they understand it better. Working on that premise, Gupta has been on the road, making science learning simple and fun. What's more, he has never got into selling these toys. He just puts them into books, so that the message reaches more children and they can themselves practise and experiment.

The range of his toys is unlimited. Like a magician, he puts his hand into his magical bag and pulls out all kinds of wonderful science-based toys. Mechano sets made out of cycle tubes, motor cars made from batteries and magnets, air pumps to blow balloons from empty film roll cans and cycle tubes, fun toys like a marble-swallowing rat made from newspaper, different games from matchsticks and boxes, and many many more. What gets the children totally hooked is the fact that all these marvellous little gizmos can be created by them too.

Keeping simplicity and affordability as his guiding principles, Gupta's toys are made out of household waste. Discarded tetrapaks, cycle tubes, toothpaste tubes, paper, battery cells, refills, film rolls, cartons, bottles, straws there's nothing that doesn't qualify as raw material in his laboratory. To make his toys, one doesn't need to shop for expensive and new things; any used item can be recycled into a wonder toy of science. "After all, in a world so full of junk, there can be no dearth of material," he points out. "Half the fun is in collecting the material," he adds and children ought to be trained to look at waste as the birthplace of new creations.

This emphasis on waste has been a habit he cultivated in his childhood. Born into a family which had scant resources to give its four children, Gupta learned to do more with less. He remembers the broken trunk he possessed, filled with all kinds of throwaway tools, and these served as the apparatus for his experiments. Though resources were few, there was no dearth of creativity or encouragement. "My parents never went to school, but they gave all their children a good education. Moreover, my mother instilled a very high sense of self-esteem and self-worth in us. She never interfered in my tinkering with toys, just letting me be in my own world, confident that something right would come out of whatever I did," he says. From his childhood, he has carried away another tenet - "If you want to love God, serve the poor." The words of an Italian nun at his school still ring in his ears, and he has ensured that this underlines most of what he does.

His poor economic background notwithstanding, Gupta found himself at the doors of the nation's premier technical institute - IIT, Kanpur - after an extremely successful 12th year at school. The next five years were marked by gathering knowledge and learning. "Of course, I learned much more from my peers than from the curriculum," Gupta is quick to add. He and his friends took turns at bunking classes and made all kinds of interesting working models. Since he hadn't had too many books at home, at IIT, he devoured them. "Those were politically volatile years," he remembers. "The slogans that reverberated around us urged us to go the masses, to start from what they knew, and to build on what they had," he adds.

Keeping this Gandhian motto in his heart, this electrical engineer went on to work for TELCO. There too, he engaged himself with the worker class, connecting with them at their level. He translated the worker's logbook from English into Marathi, so that it could be read by those for whom it was meant. He taught them elementary engineering topics like circuit diagrams, intent on sharing whatever he knew.

Something, however, seemed amiss. He yearned for something more, and after two years at TELCO, he took a year's study leave to work with the Hoshangabad Science Teaching Programme (HSTP), Madhya Pradesh. The whole idea of this programme was to revitalise science teaching through the discovery approach and activities and this was right up Gupta's sleeve. For six months he worked there, trying out all kinds of experiments at the government school. It was here that the idea of incorporating a science principle into a toy took root and one of his most famous toys - a mechano set made out of matchsticks and cycle valve tubes - saw the light of day.

Since then, there has been no looking back. Gupta has designed around 250 teaching aids and toys out of waste. All these have been documented in low-cost books that have been translated and printed in many languages. Little Toys, Ten Little Fingers, String Games, Matchstick Models and Other Science Experiments (which has been translated into 13 Indian languages and sold over 6 lakh copies), Pumps from the Dump, and The Toy Bag are some of his most acclaimed books. Gupta has also made over 70 films for 'Countrywide Classroom', UGC's programme for school children, as well as 'Tarang', a children's programme on Doordarshan. Over the years, he has had the opportunity to conduct workshops in over 1300 schools across the country. For his sustained efforts in the field of science teaching, he has been honoured with the first National Award for Science Popularisation and the Hari Om Shree Award of the UGC, amongst others.

It's been a long journey, fraught with ups and downs. But Gupta has been persistent in his mission - to teach the principles of science in such a way that kids not just learn, but enjoy the learning process too. Moreover, his efforts have always been directed towards the poorest of the students, ensuring that they too can afford to try out his methods. "We have propagated a myth that science can only be done in fancy labs with glass burettes and pipettes. It has been made out to be a bookish affair in our schools - something in which you have to mug up definitions and formulae and spit them out in the exams. But this is patently untrue," argues Gupta. "For children, the whole world is a laboratory. We have forgotten the task of bringing children closer to nature. If you can show them that scientific principles such as laws of motion, or the principles of geometry exist in familiar daily-use objects around them, then they internalise science better and can relate it to their daily lives."

Arvind Gupta hopes that his new venture - the Muktangan Science Exploratorium for children at IUCAA - will foster popular science. For more, read the feature linked below.  •  IUCAA: the people's astronomer

In order to fulfill this objective of getting children and science closer to each other, Gupta believes that national level organisations need to do much more. He laments the death of popular science magazines such as Science Today and Science Age, and the absence of any good Indian website dedicated to children or to science popularisation. He hopes that his new venture - the Muktangan Science Exploratorium for children at IUCAA - will do something to alleviate this situation. This is intended to be a hands-on science centre, where children will be encouraged to experiment.

Along with his science popularisation activities, Arvind Gupta has been actively involved in translation for just as long. Primarily to encourage the habit of reading amongst the children in the Hindi belt wherein lie his roots, he has translated over 100 books on education, environment science, peace, maths into Hindi, and worked to make them available at low costs. He has been associated with the National Book Trust for over 15 years, working towards the aim that is encapsulated in a slogan for Project Gutenberg - "A million books for a billion people."

Whatever be the path he chooses, Gupta has been working tenaciously, striving to reach as many people as he can with his messages about life and learning. "Life is too short for gimmicks," he says. "I was fortunate to have a good education and I shall always endeavour to do meaningful things - things, which give me pleasure and at the same time benefit society," he adds. With this, he picks up his toy bag with its countless odds and ends, and looks out at the road that beckons him to newer places and newer experiments.