Anti-rape law: Can India get it right?

As Parliament prepares to pass new anti-rape legislation on the basis of the government-promulgated ordinance, Padmalatha Ravi discusses recommendations of the seminal report by the Committee that underlines the need for law that is better conceived.
15 March 2013 -

Parliament passed the Sexual Harassment at Workplace (Prevention, Prohibition, Redressal) Bill on February 26th. It is heartening to note that this bill is comprehensive and largely adheres to the recommendations of the Verma Committee. But as the deadline draws near for Parliament to pass the new anti-rape bill replacing the Criminal Law (Amendment) Ordinance promulgated on 3 February, 2013, one cannot be sure whether the new Bill will be an effective instrument of redress and justice in case of crimes against women.

This is because the ordinance – passed by the President in the wake of the outrage against the Delhi gangrape incident – was said to be based on the 630-page report submitted by the Justice Verma Committee (JVC), but in reality, ignored most of its key recommendations. It only played to the gallery, making death penalty for rapists (in rarest of rare cases) the highlight. The committee had, in fact, rejected the idea of death penalty.

A recent discussion at the Bangalore International Centre, titled The Significance and Implications of the Justice Verma Committee Report” brought into sharp focus the need for deeper introspection and consideration of the provisions in the report when the Cabinet considers passing the new anti-rape Bill.

The report recommends not just harsher punishment for the rapist but also goes deeper and discusses police reforms, education and even electoral reforms. The report though produced in just 30 days, is not a knee jerk reaction

•  Delhi is designed for rape
•  How they fool us, the outraged

The merits of the recommendations of the Verma Committee become particularly pronounced when Narrain clearly says that the ordinance is in fact an “insult to rape victims” and “makes no attempt to understand the violence involved in the act of rape.”

The committee was set up on December 23rd 2012 after the brutal gang rape of  a 23-year-old student in Delhi. Headed by Justice J S Verma , it had two other members – Justice Leila Seth and Gopal Subramaniam. The primary objective of the committee was to look into possible amendments to the criminal law to provide for quicker trial and enhanced punishment for criminals committing sexual assaults of extreme nature against women.

The committee then asked the public to send in recommendations for them to consider. Between December 23rd and January 5th, the committee received nearly 80,000 submissions. This unprecedented public participation represents the mood of the public; the loud demands for swift action and stricter laws were unmissable.

The report takes cognizance of the large scale protests that were held after the Delhi incident. “The constitution of this Committee is in response to the country-wide peaceful public outcry of civil society, led by the youth, against the failure of governance to provide a safe and dignified environment for the women of India, who are constantly exposed to sexual violence,” it says. 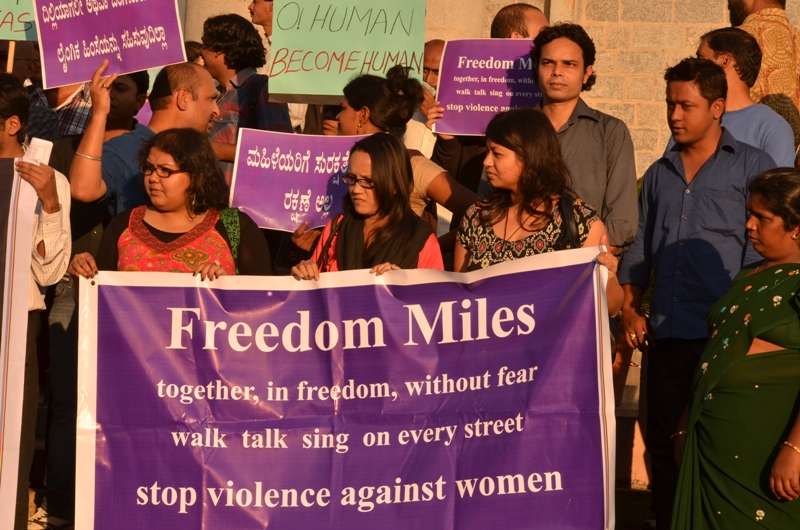 Protests in Bangalore after the death of the student gang-raped in Delhi.
Credit: Jim Ankan Deka via Wikimedia

The report recommends not just harsher punishment for the rapist but also goes deeper and discusses police reforms, education and even electoral reforms. The report though produced in just 30 days, is not a knee jerk reaction; rather, it is a result of careful consideration of sustained campaign from various women’s organisations over the years and especially after the Delhi gang rape incident.

The report first and foremost acknowledges that rape is not about sex or lust but about power struggle and dominance - a fact that is ignored both by the law, the society and even media while reporting on rape cases.

In the section  “Education and Perception reform” the report lists down a series of issues that lead  to gender discrimination and then on to sexual violence and also actions to be taken to ensure gender equality. The report notes that we live in a ‘cult of masculinity’ and goes on to describe  society’s norms for masculinity. “Touching, harassment and forced intercourse are all seen as normal to masculinity. There is a prevalence of a misplaced belief among young men that a ‘real woman’ was meant to resist sexual advances. Thus the use of force becomes not only normal, but (if a real women resists) also essential and ideal. These notions carry over to sexual relationships, and there combine with notions of masculinity that involve explosive sexuality, sexual success, independent from relationships, physical toughness, and loss of empathy.”

The idea that sexual violence, especially rape is a deliberate act of dominance and not an act of impulsive expression of sexual desire, as popularly believed, has never been acknowledged in such clear terms before.

The Verma committee also stoutly said no to capital punishment and amendment of juvenile justice laws. The latter, in particular, was a loud cry from the public since one of the rapists in the Delhi incident was a minor. The Committee was of the view that neither would actually result in bringing down the rape, nor would it increase the chances of prosecution.

The committee is also explicit on the issue of consent that is often debated in rape cases.

In the Mathura Rape case, for example, where 16-year-old Mathura, a tribal girl was raped by two policemen in the police station in Maharashtra. When the case came up for hearing at the sessions court in 1974, the police men were declared not guilty. The judgment stated that “because Mathura was 'habituated to sexual intercourse,' her consent was voluntary; under the circumstances only sexual intercourse could be proved and not rape.”

The Nagpur Bench of Bombay High Court eventually set aside the Sessions Court verdict saying “passive submission due to fear induced by serious threats could not be construed as consent or willing sexual intercourse.” The Supreme Court however reversed the order saying the alleged intercourse was a ‘peaceful affair’ since there was no external injuries on the girl.

The JVC defines consent as “an unequivocal voluntary agreement when the person by words, gestures or any form of non-verbal communication, communicates willingness to participate in the specific act.” In the absence of such, it would be concluded that there was an act of sexual violence against a woman’s will.

Section 375 says that penetration alone constitutes the sexual intercourse necessary to the call it an offence of rape, but the JVC report broadens the definition to include any part of the man’s body or an object manipulated by the perpetrator.

Further, Section 375 excludes marital rape. Sexual intercourse by a husband with his wife, against her consent, when the wife is above the age of fifteen is not considered rape. Whereas the committee notes that “The exemption for marital rape stems from a long out-dated notion of marriage which regarded wives as no more than the property of their husbands. The committee further observes that this immunity to the husbands has been withdrawn in most countries including United Kingdom whose laws the Indian constitution draws heavily from. The hurriedly drafted ordinance conveniently leaves marital rape out of its purview.

The report also recognises sexual assault is not restricted to just women but extends to homosexuals, transsexuals and transgenders as well and points out that the law has to take cognizance of this aspect as well.

The JVC report suggests that Armed Forces Special Powers Act (AFSPA) and AFSPA-like legal protocols need to be reviewed, a call the political class has been unwilling to make, in all the years of protests.

The two-finger test conducted on the victim to ascertain rape has also come under heavy fire by the committee. The report states “The issue of whether sexual assault occurred is a legal issue and not a medical diagnosis. Consequently, doctors should not, on the basis of the medical examination conclude whether rape had occurred or not.” This practically turns the investigation mechanism followed by law officers on its head, since much of the case is based on the medical opinion.

The committee also takes a progressive view on the rape victim itself. It notes that rape is just like any another crime against a human body and that there is a need to “deconstruct the paradigm of shame and honour in connection with a rape victim.”

But even as the JVC report takes a layered view of the huge range of issues related to sexual violence against women, the ordinance comes across as being hasty, ill thought out and with a lack of empathy towards victims of rape.  Activists advocating for women’s rights have come down heavily on it saying that it reverses the progressiveness found in the JVC report.