Not everyone wants a plastic-free future!

A petition filed by an NGO before the NGT seeks a phasing out of the use of plastic bottles and multi-layered plastic packaging, but there is a strong opposition to the proposal from a significant section of stakeholders belonging to the industry. Devanik Saha reports.
12 May 2015 -

The debate around the use of plastic and its harmful effects on the environment has been raging for many years now. In 2014, Him Jagriti Uttaranchal Welfare Society, an NGO, filed a petition in the National Green Tribunal (NGT), which seeks to restrict the use of plastic bottles, multi-layered plastic packages and polyethylene terephthalate (PET) bottles and to phase out the use of plastic polythene for all other non-essential items.

The petition also calls for modification in the Plastic Waste (Management and Handling) Rules, 2011 and instructions to the Central Pollution Control Board (CPCB) and the environment ministry to issue prohibitory directions under Section 5 of the Environment (Protection) Act, 1986. Under the Act, the Central Government may issue directions in writing to any person, officer or any authority, who will be bound to comply with such directions.

The NGO’s petition is based on the argument that unrestricted and unregulated use of plastics for the purpose of packaging has significant environmental and health impacts. Currently, the total plastic waste generated in the country is estimated at 15,342 metric tonnes per day according to the CPCB.

In response to the filed petition, the environment ministry expressed its view that a scientific study was needed in this regard, while the CPCB held that plastic is indeed an environmental hazard and injurious to public health. 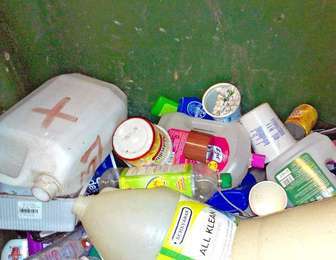 The total plastic waste generated in the country is estimated at 15,342 metric tonnes per day according to the Central Pollution Control Board. Pic: Savita Hiremath via Citizen Matters

The Central Drugs Standard Control Organisation (CDSO) in exercise of its power under the Drugs and Cosmetics Act, 1940 has also proposed a complete prohibition on the use of polyethylene terephthalate (PET) or plastic containers in liquid oral formulations for primary packing.

In an order dated 13 March 2015, the NGT clarified that "Prima facie, we are of the view that there has to be restriction placed upon such packaging and generation of municipal plastic waste. However, before we pass any order, we consider it appropriate that all the stakeholders should also be heard."

One such stakeholder is undoubtedly the All India Plastics Manufacturers’ Association (AIPMA), the largest apex body of the plastic industry in India, which convened a meeting in April to discuss ways to tackle this petition.

The AIPMA is clearly opposed to the proposed ban. When contacted by email, AIPMA officials wrote back saying that it was not ready under any circumstances to accept any type of phasing out of any plastic packaging.

“There is no need for such a situation as plastic packaging is good for long shelf-life of packaged products; it is non-toxic, backed by least carbon footprint, and is 100 percent recyclable and reusable. It provides a livelihood for millions of people and would harm a lot of industries simultaneously as alternatives are very expensive. Phasing out plastic packaging will also lead to increase in prices of daily food products, directly impacting the common man,” says the Association in its email.

That the AIPMA is not willing to concede an inch of space to opposing viewpoints is also clear from another controversy that marked its April meeting. This involves the rather acrimonious exchange with Chintan, a New Delhi-based environmental NGO, that works and partners with the informal recycling sector, such as waste pickers and kabadis, to clean up cities, recycle more efficiently and create livelihoods for waste pickers. It also works with plastic manufacturers and industries.

Chintan was invited for the AIPMA meeting but was allegedly thrown out rather unceremoniously by the Association’s President Rituraj Gupta. A subsequent press release from Chintan said that they were thrown out of the conference “because of its openly held belief in waste reduction, including reduction of plastics, and because it works with the poor, i.e., waste pickers, who the industry has systematically exploited (by claiming plastic can be recycled but doing nothing for the recyclers themselves.)”

Chitra Mukherjee, Manager- Advocacy, who was one of the representatives from the NGO at the meeting, said “We were not very keen to attend the event as we believe in reducing the use of plastics and reduction of waste. But the AIPMA requested us to attend the event, hence we decided to go, but their conduct was highly appalling”.

Why is the AIPMA batting for plastic?

The AIPMA has its own reasons for putting up a staunch stand against all environmental arguments that go against plastic.

In an email exchange with this writer, the Association said that there was enough proof locally as well as through worldwide technical data that any ban on plastic would be misplaced. The real problem, according to them, is collection of post-consumption waste, which would be true for all kinds of waste and not only plastics.

“Even paper is biodegradable yet it flies around, are we banning paper even though it degrades after a long time? Then why are plastics being targeted in spite of the same being recycled and reused to the extent of 80 percent or more?” asks the AIPMA.

The Association, in fact, believes that the NGT ban on plastics will harm the environment most. More forests will be cut down to facilitate paper packaging and consumption of fossil fuels would increase in transportation of heavier packaged glass bottles. There would also be greater water wastage due to washing of glass bottles.

The AIPMA also points to the adverse impact on livelihoods. “It is difficult to quantify that, because it is not merely the production industry that will be hit by the ban, but the complete chain starting from raw-material producers and processors, to FMCG companies, retailers, and ultimately recyclers. There will be a complete collapse of the industry. Furthermore, it will have a big impact on the economy and GDP and everything including food products will become at least 3 to 5 times more expensive, thus burdening the low income segment,” it holds.

There are not many takers, however, for this line of thought. An environmental lawyer, who has been involved in various cases and has followed the petition closely, points out that a phased restriction of plastic packaging, starting with non-essential items, would not place an unnecessary burden on middle and lower income groups, an argument claimed by the AIPMA above.

Moreover, it has been pointed out that the petition not only points to the environmental harm from plastic, but also argues on the ground of health impacts due to the use of plastic packaging (leaching, migration of phthalates from plastic containers to edible items etc.). Such health effects, in fact, place a higher burden on middle and low income groups indirectly.

In addition, the plastic waste rules clearly talk about "Extended Producer Responsibility," which in effect means that the increased cost should ideally not be passed on to consumers.

The litigation on the issue is still pending. In its order dated 8 April 2015, the NGT had given three weeks to the government and other stakeholders to file their final responses to the petition. It had also ordered the Ministry of Chemicals and Fertilisers to formally join in future case hearings, along with the environment ministry and the petitioners.

In the most recent hearing on 8 May, in the presence of multiple respondents to the petition, the NGT ordered them to choose a single respondent who would address the arguments collectively on behalf of all. It also listed the matter for further hearing in July before the five-member NGT bench.

Vulnerable to more than the virus
MORE ARTICLES
on similar topics ...
ECONOMY