Maharashtra: The graveyard of farmers

The state has witnessed 30,000 farm suicides in a decade. Vidarbha is the worst place in the nation to be a farmer, writes P Sainath.

Nearly 29,000 farmers committed suicide in Maharashtra between 1997 and 2005, official data show. No other State comes close to that total. This means that of the roughly 1.5 lakh farmers who killed themselves across the country in that period, almost every fifth one was from Maharashtra - which saw a 105 per cent increase in farm suicides in those nine years. More than 19,000 of those farmer suicides occurred from 2001 onwards.

These dismal findings emerge from a major study of official data on farm suicides by K. Nagaraj of the Madras Institute of Development Studies (MIDS). Professor Nagaraj has analysed data recorded by the National Crime Records Bureau (NCRB), Ministry of Home Affairs, from 1997 to 2005 (see Table). The study begins with 1997 because that was the year when most States began reporting farm data regularly.

Professor Nagaraj's study shows that of the almost 1.5 lakh farm suicides in India between 1997 and 2005, over 89,000 occurred in just four States: Maharashtra, Andhra Pradesh, Karnataka, and Madhya Pradesh (including Chhattisgarh). Importantly, Maharashtra accounts for a third of all farm suicides within these Big Four States. "This State," says Professor Nagaraj, "could be called the graveyard of farmers." 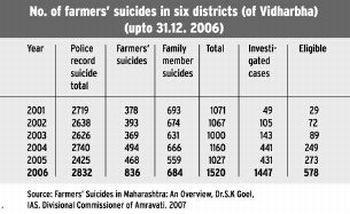 In Maharashtra, suicides by non-farmers actually saw a decline of 2 per cent in those years. That means the intensity of the crisis was borne almost entirely by the farming community. So farm suicides rose steeply, even as non-farm suicides fell marginally.

The percentage increase in farm suicides for Andhra Pradesh (127 per cent) was higher than in Maharashtra (105 per cent) if we take the 1997-2005 period. However, these are both States where the data go back to 1995. Taking that year as the base, the percentage increase of farm suicides in Maharashtra was 263 per cent over 1995-2005. For Andhra Pradesh, it was 108 per cent over the same period. This translates into a very high annual compound growth rate (ACGR) of 7.6 per cent in farmers' suicides in Andhra Pradesh for the period 1995-2005. Which implies farm suicides there might double in 10 years if present trends hold. Maharashtra's ACGR for the same period was 13.7. Which means farmers' suicides here could double in six years, given the same trends.

Unlike for most States, some region-specific data on farm distress do exist in Maharashtra. Thanks to public action and activism, positive court intervention, and media pressure, the State Government was forced to keep some record, however flawed. Also, a paper by the then Divisional Commissioner, Amravati, S.K Goel, clearly recorded the situation in the Vidarbha region. Besides, the Maharashtra Government held the largest-ever door-to-door survey of its kind in the region in 2006. This study covered every farm household in Vidarbha's six 'crisis' districts using 10,000 investigators. It captured a portrait of distress and crisis. (The Hindu, Nov. 22, 2006).

It found that of the 17 lakh plus families covered, more than a fourth - that is, more than two million people - were 'under maximum distress.' And more than three quarters of the rest were 'under medium distress.' In short, almost seven million people were in distress. The major sources of such misery: debt and crop loss or crop failure (which often overlap). The pressure on farmers who cannot afford their daughters' marriages. And rising health costs.

The paper by Dr. Goel, Farmers' Suicides in Maharashtra: An Overview, placed some of this data on record. While his reading of some of the data does not hold up, his contribution to the study of the subject has been quite vital.

However, only the state gets to decide which suicide is a farmer's suicide. The Maharashtra Government's efforts show much creative accounting. The Nagpur Bench of the Mumbai High Court compelled the government to maintain suicide statistics on its official website from mid-2006. But with a few exceptions, the media never really picked up the damaging data on the website. And the government was free to play with definitions of what was a 'genuine' farm suicide.

As a result, less than 20 per cent of the 15,980 suicides are by 'farmers.' This, in overwhelmingly rural districts! (For instance, 80 per cent of Yavatmal's population is rural.) And just a fraction of that - 1,290 cases - are accepted by the government as distress suicides worthy of compensation. This is achieved by inspired jugglery, as the accompanying table (I) shows.

The first columns give you total suicides each year. Take 2005 for instance, which saw 2,425 suicides in these districts. The next column is 'Farmers' Suicides.' Just 468 of them. Then an extraordinary column: 'Family members' suicides.' That figure is 559. That is, it holds that family members on the farm committing suicide are not farmers. This helps skim down the figure further. Next comes the total of these two followed by 'Investigated cases.' The final column invents a new category unknown elsewhere: 'Eligible suicides'. That is, suicides the government deems genuine and due for compensation. And so, for 2005, the suicides column that begins at 2,425 ends with 273. This amputated figure then, for propaganda purposes, becomes the number of 'farmers' suicides.' This way, a 'decline' in farm suicides is 'established.'

The contortions are best seen in the category of 'Eligible' suicides. Indeed, there is a whole separate table - not reproduced here - on 'Percentage of eligible farmers suicides in six districts.' And of course, 'Estimated eligible suicide cases' show a decline. So the number of suicides keeps mounting - but the number of farm suicides keeps falling! If accepted at face value, this jugglery would imply that only farmers are doing well.

Everybody else is sinking in Vidarbha. Read more seriously, the region specific data - viewed against the national and State figures - suggest that Vidarbha is today the worst place in the nation to be a farmer.