Will passengers have to bear the burden of Mumbai Metro?

Even before the first line of the much-anticipated Mumbai Metro becomes functional, a number of issues have cropped up, most notably one over the pricing of tickets. Darryl D’Monte tracks the arguments, with comparisons to metro rail elsewhere.
02 June 2014 -

Any day now, trains on Mumbai’s first Metro line, from Versova on the west coast of the peninsula through Andheri to Ghatkopar in the eastern suburbs, will  be given the green signal, once the safety provisions are okayed. This will provide much-needed west-east connectivity in the city.

The second line, which has long been delayed due to a successful citizens’ campaign to force it to go underground, provides even more extensive connections between the east and west in the same extended suburbs, and is again being mooted, with Japanese funding and technology.

But even before the start of the first line, a lively discussion has arisen over the hike in fares that Reliance Infra’s Mumbai Metro One Pvt Ltd (MMOPL) has sought. MMOPL is a joint venture company owned by Reliance Infrastructure, Veolia Transport and the state government’s Mumbai Metropolitan Region Development Authority (MMRDA).

The company has sought to increase the fares from the initially proposed Rs 9-13 to Rs 22-33, citing an increase in capital and operating costs. It has referred to the provisions of the Central Metro Act to justify the increase. Till November last year, the project was constructed under the Tramways Act.  However, the MMRDA has cited the prior concession agreement between the parties to negate any increase in fares before the metro starts functioning.

Members of the Mumbai Transport Forum, which deals with public transit issues on a daily basis, have questioned how the Anil Ambani-owned Reliance Infrastructure, formerly Reliance Energy, can justify this hike. As it is, even with the original fare structure, the metro compares unfavourably with Mumbai’s lifeline – the suburban network belonging to the Central and Western Railways -- granting that the former provides far more comfort.

Mumbai’s peculiar geography, which has imposed a north-south transport axis due to being hemmed in by the sea on either side, makes railways the only and truly mass transport in the city. But how can the Metro be expected to recover its costs or sustain itself if fares have to be within the reach of the masses?

All over the world, operators of metros do not recover their costs from passengers’ fares. MMOPL too, which is asking for higher fares, has been given several opportunities in this respect.

Reliance Infrastructure has become the country’s most powerful private transport utility. In February, the state government recommended to the Centre that MMOPL be made the metro railway administrator (MRA) for the first line, which in effect places it out of the control of the state. Of the 11 directors on the board of MMOPL, eight belong to RInfra.

According to Section 34 of the Railways (Operations and Maintenance) Act, 2002, the MRA has the power to fix the first set of fares without any interference from another agency. Subsequently, however, any revision of fares will be decided by a three-member Fare Fixation Committee headed by a retired or a sitting high court judge. 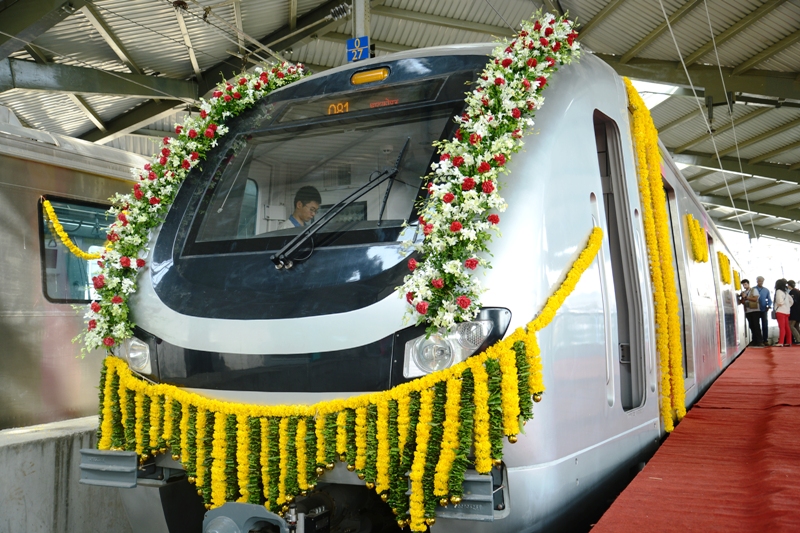 This Act also applies to the Delhi, Bangalore and Chennai metros but since these are equally owned by the central government and the respective state governments, they remain firmly under government control. After the current experience with Mumbai’s first metro route, the Maharashtra government appears reluctant to repeat the public-private partnership (PPP) model for the vexed second line with RInfra.

The third line, which will follow the north-south axis from Colaba at the southernmost tip of the island city through the Santa Cruz Electronics Export Processing Zone (SEEPZ) to the airport will be wholly managed by MMRDA when it is completed in a few years.

Sanjay Sethi, MMRDA’s additional metropolitan commissioner, told DNA about fixing fares on the first line: “There is a concession agreement signed between the government and the private entity which cannot be ignored. Therefore, provisions of the Metro Railways (Operations and Maintenance) Act, 2002, cannot be seen in isolation... also, the Act has not foreseen certain circumstances. There is no other metro rail doing this kind of PPP and so, all details should be put together before deciding anything. There must be checks and balances in place before taking decisions on any subject.”

Under Section 6 of the Act, the MRA does however have the power to “acquire, hold and dispose of all kinds of properties owned by it, both movable and immovable”. It also has the right to improve, develop or alter any property or asset held by it. Besides, the MRA can develop any metro railway land for commercial use. It can execute any lease or grant any licence in respect of the property held by it. The Act also grants wide powers to the MRA to erect hoardings, as well as to use the metro property extensively for garnering advertising revenue.

Yet another controversy surrounds the question of whether the employees of the MRA will be subject to the RTI Act. Being a public transport provider, it is bound to face queries from  commuters. Shailesh Gandhi, a former Central Information Commissioner in Delhi, believes that being a PPP, “It is beyond reason why it (Metro) cannot be a public authority. Any organisation owned, controlled or substantially financed is a public authority as per the RTI Act.”

According to Bhaskar Prabhu of the Mahiti Adhikar Manch, an NGO working for the awareness of the RTI Act, the Department of Personnel and Training designates all PPPs as public authorities irrespective of the share or partnership, and therefore, would be covered under the RTI Act.

Metro experience from around

Jitendra Gupta of the Mumbai Transport Forum has drawn comparisons with fares being charged by other metros. Delhi has the second-largest metro service in south and south-east Asia, its passenger load being second only to Hong Kong. Its minimum fare is Rs 8 and maximum Rs 30. The RInfra-led Delhi Airport Metro Express has a minimum fare of Rs 30 and a maximum of Rs. 150.

The Delhi metro has become a prime location for companies to advertise, and the authorities are keen to take advantage of these opportunities. As many as 200 popular brands already advertise on the National Capital Region’s network. With more than two million people using the Delhi Metro every day, on average, travellers spend 4 minutes waiting on the platform per trip.

Delhi Metro Rail Corp. Ltd (DMRC), which operates the capital’s 190-km metro rail network, hopes to double its revenue share from advertising and shop rentals in five years, taking advantage of the demand from telecom, automobile, banking and entertainment companies for advertisement space at its stations and along its routes, and food chains. DMRC expects to raise 40 per cent of its revenue from these sources.

In Kolkata, the minimum fare, valid up to five km, is Rs 5. Between five to 10 km, the fares are Rs 6 to Rs 10. Those travelling between 11 and 15 km have to pay Rs 15.  It carries around 6.5 lakh commuters on weekdays and nearly four lakh passengers on weekends.

In Bangalore, the minimum is Rs 10 and maximum Rs 17. The Bangalore Metro Rail Corporation’s (BMRCL) 7-km network is now planning to earn 7-15 per cent of its project cost through advertisements and commercial use of its property as it has realised that it cannot recover its project cost from ticket sales alone. For an advertisement on the back of the metro smart card, BMRCL has charged Rs 5 lakhs; this has earned Rs 2.5 crores.

BMRCL has received applications from advertisement consultants who will help the corporation chalk out how the station space can be used to maximise revenue from commercial use of the area. The metro authority will soon provide space to set up retail shops to sell essentials like medicines and stationery in metro stations.

Gurgaon Rapid Metro runs for 5.1 km at a flat fare of Rs 12. Half of Hyderabad Metro's revenues will come from property development and rentals.The 6.5-km Metro rail stretch that is operational in Bangalore does not have advertisers yet.

All metro rail systems should raise at least a third of their revenues coming from property development and advertising. Revenues from the developments are crucial for metro companies because of their inability to charge fares high enough to cover costs.

The world over, metro rail projects are a tough business. Of the 200 or so global metro rail systems, only four -- Hong Kong, Tokyo, Singapore and Taipei -- have been financially viable. But these, too, had active government backing.

Non-fare revenue is crucial for the success of mass transit systems in India, where fares are kept deliberately cheap under populist pressure. Internationally, governments and metro operators have made much more money through station branding. Dubai Metro was the first project in the world to sell station naming rights. This was followed by metros in Chicago, Boston, Houston, London, Philadelphia, Montreal, Rio de Janeiro and Gurgaon.

Station branding is successful internationally, but it has just taken off in the country and metro operators here have low expectations. The Mumbai Metro, built at an original cost of Rs 2,356 crore on a 35-year concession, expects only 5-10 per cent of its revenue from ticket sales. About 40 per cent is slated to come from advertisements and station naming rights. The Mumbai Metro will be the second mass transit project in the country after Gurgaon Rapid Metro to use station branding for revenue.

For the first phase of the Mumbai Metro between Versova and Ghatkopar, the operator is auctioning rights to name 12 stations on the line. Station naming contracts are usually awarded for five years, which can be extended by five more years. Sources say that in the bidding process for the Mumbai Metro stations, annual rights were sold at about Rs 2-6 crore for each station.

The name of the successful bidder will prefix the name of the station and the company will have rights to 13 elements on the Mumbai Metro website and during announcements.

Fares all over the country approximate what earlier state governments had approved in their notification. Anything more would be unjustified. With such a huge urban population, Mumbai Metro should expect greater footfalls than expected, resulting in much high revenue collections through ticket sales. With high passenger turnout, advertisement revenue could also be expected to be much higher compared with other cities in the country. The justification for raising ticket fares, therefore, does not appear to hold much strength.