Making it to page one

A homely looking woman in her late fifties has for years run a small-scale business doing what is widely seen as a man's job -- providing computer hardware to companies. But she does not make the local news. A culture of community journalism in the English newspapers is missing and is much needed, says Nabina Das.
03 October 2005 -

Recently I met this lady from Chennai. To start a conversation I asked her what her occupation was. I was hoping to receive a stock reply like you often do from homely looking women in their late fifties. She surprised me by saying that she actually ran a small-scale business -- that of providing computer hardware to companies. She started to work while she was in her later 30s. She traveled from her city to other towns, combed the streets of her city, walked, rode buses, soaked in rain and endured the humid sun. Not to mention inquisitive neighbours and disdainful dissenters.

There are probably not many like her who single handedly launched a project like this and brought it up to a respectable status. When I would reach my clients place, they would ask: where is your man? Revathi said. Here am I, I would say as I opened up my tool box ! Their mouths would gape open, she said laughingly.

Community reporting for most publications, was inside page stuff that didnt sell. We were trying to change that notion, and maybe we did, for a while.

Stories such as Revathis do not always make news in regular newspapers. Its not typically rags to riches stuff, nor is it news of the weird. In a country where political shenanigans, hoopla on cricket or scandals seem to go down well with the mornings cup of coffee, Revathis are usually not even on the metro page of a moderate size or even a town newspaper.

My experiences with the news coverage in places like Assam or Delhi highlighted nothing that could be put in the category of community news coverage. Community mattered when political leaders visited a ward or a municipality for a specific reason or when it was time to woo voters. Even then, assignment editors would not want the stories to be woven around the tribal farmer with his subsistence pig farm or the poor Muslim pith crafter community (whose craft is nearly vanishing).

In 1988-89, in Guwahati, Assam, where I started learning the first lessons in journalism, as any newbie would be, I used to be the jack of all trades  whether it was covering the annual book fair, writing a theater or a film review, interviewing the best school in town, attending a meeting or profiling a cultural persona. As a fledgling reporter cum subeditor, I was obviously not writing hot political stories, investigative themes or business stories. I was too new and young for all that. But I knew there were stories swarming around me  people, events and moments of life in the community. It was just that they were really not perceived as story ideas. National politics, state politics, big business and glitzy cultural news made headlines. 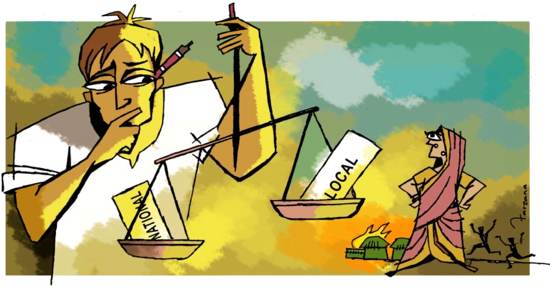 But an interesting aspect of this early stage was that I was also learning to edit town roundups for The Sentinel, a Guwahati English daily, where I was a sub-editor. That put me in touch with town reporters who were filing stories from towns all over Assam. These were literally barefoot reporters who would survive on a paltry salary and dream of finding the big story some day. Most of the time, I acquainted myself with their work through faxes, handwritten and mailed reports and telephone (there wasnt any e-mail then). One such reporter from either a small town like Dhekiajuli or Bijni faxed a story about a tiger venturing into a part of the town and attacking a person or being warded off by some fearless townspeople. The story was dramatized, poorly written and obviously the reporter did not ask several necessary questions. One of my senior colleagues pinned up the handwritten report, all outrageous portions underlined, for everyones review. The entire newsroom resounded with guffaws.

I am pretty sure that story about the tiger attacking a human in a small town in Assam never made into that edition. May be it would, if it was higher on the death score, or the fearless town people were somebody to reckon with. Anyhow, I happened to remember this particular incident. Something told me right then that someone had to take note of that kind of town or village life and elevate it to the rank of news. But that was not happening. All our town reporters were eager to do, was to write was a big time story. Period.

News coverage in Delhi had not much exception, except that here the themes were bigger. I worked with Down To Earth - an environmental magazine -- and many years later, at Tehelka.com. My colleagues and I wrote and edited stories on environmental disasters, million-bucks deals, super cops and super stars, war with corporate giants, political parodies, scandals and apocalyptic events. The public needed godheads  different ones at different times  and villains as well, and we provided them just that. Some how, the community in question here, never seemed to take any interest in its own microcosm  or so we were made to understand.

This could have been the nature of things for all times to come but then, what is journalism without the spirit of quest and change.

I am sometimes glad that took the time to look at affairs of the world from different angles, as a student, as a journalist, a short-term teacher of language or even as an NGO worker. At the National Foundation for India (a funding agency aided by Ford Foundation), I worked closely with journalists to creating space for community/development reporting from the Northeast, Bihar, Rajasthan, and parts of South India. Those projects brought me closer to real life real news issues.

Interestingly, during these projects, news the way it has always been changed remarkably. Especially, the northeast -- seen normally as the hub of all shades of insurgency and unrest, a trouble spot in the national canvas, a zone marked by poverty and inaccessibility, and oftentimes, fringe presence in the mainstream  emerged in a fresh new light.

I worked with reporters who wrote about farmers emerging from insurgency crisis through planned subsistence farming, women raising awareness about dangers of alcohol and drugs though door to door campaigns, communities misused by politicians coming up to voice their needs, artisans groups bolstering themselves against government apathy through small cooperatives, and much more. Each of these themes generated scores of stories. The Revathis of this world  from the northern badlands to the northeast and the south all had a chance to make headlines. Community news was being created, at least during those projects.

But then, this endeavour had to be pushed along, cushioned with incentives to even writers and reporters and followed up with aggressive media campaign for column space in major papers. We lobbied with newspapers in all corners of the country, especially those that did not regard community news as strong a sales indicator as politics, cricket or big ticket entertainment. Community reporting for most publications, was inside page stuff that didn't sell. We were trying to change that notion, and maybe we did, for a while.

Ithaca, a town of roughly 30,000 population in New York state, and home to Cornell University, is where my exposure to community journalism took on a special meaning.

Working with The Ithaca Journal as assistant Metro editor for the past two years has again brought me closer to the concept of community journalism. Dairy fests, bake and sales, AIDS run, firehouse fund-raisers, EcoVillage, reading partnerships, community art efforts, church missions for literacy, local farming  the list can be endless and evolving. Here community journalism was the benchmark of ones understanding of slice Americana, how life went about in small town America in general. Often this brand of journalism could be oblivious of issues like war and peace, climate talks or globalisation. But at least in Ithaca, it all blended into a worthy mix of stories that had both local and national impact. So much so, that a small group of students lobbying to save a small patch of woodland from being turned into a parking lot in the prestigious Cornell University grabbed national press recently. The community here was extending its tentacles to life outside, to issues more complex.

Such a representation of life  through a prism that reflects intimate and seemingly commonplace events -- is not common for Indian English newsreaders. But again, efforts do exist in several vernacular media, although there too, they seldom become national headlines. Even when they make it to page 1, there has to be something more than just a community news element in it.

It will be worth trying to regenerate  or reinvigorate -- a culture of community journalism in the English newspapers in India and lobby for a greater proportion of those stories that are about local efforts. Whether it is profiling the Revathis of the world, seeing how the 73rd amendment is enacted in villages, witnessing the coming up of a local-run anganwadi for quake-stricken Kutchhi children or interviewing the village dai who now campaigns for right of the girl child and against female infanticide  which my esteemed former colleagues and I have been lucky to involve ourselves with -- community journalism only has a better future. It is a tool for reflecting empowerment and is an indicator of people's participation in a vibrant democracy like India.