Building the lives of those who build our houses

Sordid living conditions, poor educational and medical facilities, and lack of childcare inevitably characterise the lives of construction workers in the country. Are they ever going to be able to reap the benefits of the growth they facilitate? Kathyayini Chamaraj examines.

Migrant workers from all parts of the country come in hordes to major cities to earn some money from the mega infrastructure projects being undertaken in the name of growth, development and employment generation in urban areas.  But what share of this growth is really reaching the workers to make their lives better?

Whether these workers’ families receive compensation as per the Building & Other Construction Workers’ (Regulation of Employment and Conditions of Service) Act, 1996, depends on whether or not the workers were registered under the Act. 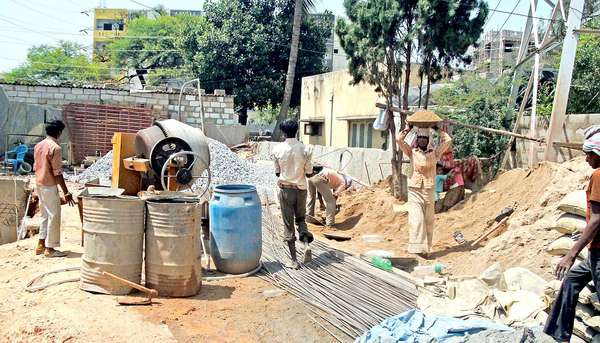 Every employer undertaking construction by engaging 10 or more workers is supposed to register himself but many are not doing so. However, the Karnataka Board had not penalised any of them.

A major lacuna in the Act is that it does not make it mandatory for employers to automatically register every worker they employ, as had been demanded by workers’ associations at the time the law was being framed. But employers rejected this demand and the result  is now there for all to see.

The Comptroller and Auditor General also found that the agencies authorising construction activities, like the Bruhat Bengaluru Mahanagara Palike (BBMP) and the Bangalore Development Authority (BDA), did not have any mechanism to inform the Welfare Board of the builders taking up construction activity.

This resulted in a loss in cess collected by the Board. There are also instances where the Karnataka Industrial Areas Development Board (KIADB), BDA and BBMP have not deposited crores of funds collected by them as cess, with the Board.

The Karnataka Welfare Board, for instance, had registered only about 5 lakh construction workers, or a mere 30 per cent out of an estimated 15 lakh workers, till recently.  The Board’s failure to create awareness among workers on the benefits of registering themselves has also been cited as a reason for this situation.

A sub-committee had recommended nomination of engineers of various government departments undertaking construction projects as registering authorities. But, as of March 2013, very few had been so designated, resulting in continued poor registration of workers. The Government has reportedly directed all these agencies not to issue licenses to contractors for construction, unless they register their workers. But whether this is happening is a moot question.

Workers also have to pay a certain amount annually as registration fees. Since a large proportion of construction workers are inter-state migrants and their contribution to one State Board is not valid in other states, many workers are reluctant to register themselves.

In view of the above, in the Commonwealth Games case in 2010, the Delhi High Court had directed that an electronic central database of all workers should be created within three months to ensure portability across State Boards so that welfare benefits reach the workers wherever they are. But that does not seem to have happened.

Where do the funds go?

Construction companies dazzle you with their state-of-the-art technology, evident in their awe-inspiring high-rises or the breath-taking, sweeping curves of their elevated, concrete railroads/expressways.  But providing simple, hygienic housing, eco-toilets and crèches for the workers who actually build the same somehow  seem to be beyond these companies.

The fact that courts have had to issue repeated directives in PILs for provision of better housing, toilets, drinking water, safer working conditions and delivery of welfare benefits to construction workers, even in such prestigious projects as the Bangalore Metro and the Delhi Commonwealth Games, speaks volumes for the interest shown in improving their lives.

Scholarships of Rs 2000 per year are provided for by the Karnataka Board for school-age children, but only from the Fifth Standard onwards. When so much money is available, one wonders why scholarships cannot be given right from Std I. It also needs to be ensured that these scholarships reach school-age children between 6 and 14 years, who are usually found languishing at construction sites without any access to formal education.

Surprisingly, the laws on construction workers, contract labour and inter-state migrant workers place no onus on employers/contractors to ensure that compulsory-school-age children of workers are sent to schools or hostels, either at the source or destination of migration.

Not just the courts, but even the CAG in its report No. 3 of 2014 has severely indicted the Karnataka Building & Other Construction Workers’ Welfare Board for its failure to reach welfare benefits to these workers, even after collecting more than Rs. 3,000 crore as cess from the construction industry.

One loophole is that the law requires builders to provide crèches only where 50 women workers are employed, which exempts most construction projects from having to do so. One thus finds kids teetering at the edge of drains being de-silted by municipal authorities, or running amok amidst speeding traffic while their mothers work. 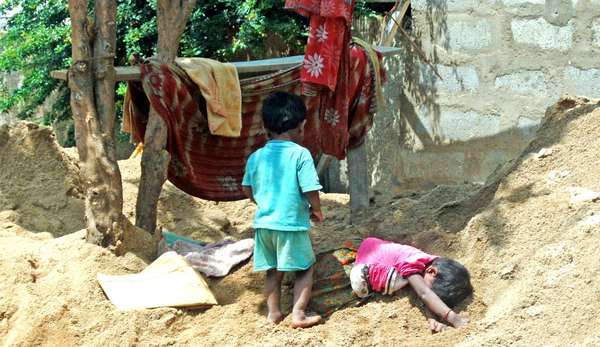 Unsupervised, with no access to either day care or formal schooling, kids of construction workers loiter around the sites as their parents are busy at work. Pic: Nalme Nachiyar/Citizen Matters

Despite the mountain of funds available, one keeps seeing women workers carrying babies at their waist even as they struggle to carry basins of mud on their head due to the lack of day-care centres for their children at most work-sites. Worse, one reads about workers’ kids falling fatally into open sumps or into construction pits.

Ironically, many construction projects are taken up by government and municipal bodies themselves. Though they are the principal employers, and are expected to be model employers, they look the other way when their contractors fail to provide workers their benefits. One labour official points out that when a contractor was asked to provide a crèche as per the law, he removed all women workers from his employment!

Most Boards pay compensation for disability or death of the worker, provide health care benefits, sanction assistance for marriages or funerals of workers, provide loans for house construction, maternity benefits to female beneficiaries, pension, etc.  However, there are complaints that the amounts disbursed by  State Boards in the form of benefits are meagre when compared to the thousands of crores of cess collected. The Karnataka Board, for instance, had spent only around Rs. 15.56 crore out of the Rs. 3,000 crore collected since 2007-08, till recently.

Officials of the Karnataka Board point out in their defence that payment of pension etc. requires that funds be put aside on a long-term basis, and hence all the cess amount collected cannot be spent every year and it would spell sheer ignorance to suggest that the unspent amount is surplus.  But it is important to have a realistic assessment of how much money needs to be set aside and how much may be used currently.

Suggestions from the ILO

In 2009, the International Labour Organisation (ILO) had undertaken a study of the Building & Other Construction Workers’ (Regulation of Employment and Conditions of Service) Act, 1996 in several States. It recommended the Madhya Pradesh model for registering workers, where urban and rural local governments have been designated as registering bodies.

The Act authorises Welfare Boards to provide grants to government bodies to create any necessary facilities for the welfare of workers. No better use of the Boards’ funds could be made than for establishing workers’ colonies, mobile eco-toilets and day-long crèches in each ward or group of wards.

The ILO study recommends, in this regard, the emulation of the Haryana model which has encouraged builders/developers to provide these facilities in public-private partnership mode with the Board, with the local authority providing the land.

Such colonies set up in every ward or a group of wards could serve as a common facility for all developers/contractors in the area. It could be made mandatory for all builders/contractors to ferry children, especially those under the age of six, at their work-sites to this common facility wherever the law does not require the builder himself to provide a crèche. The ILO study says that these colonies could also provide health care, education, and recreation facilities to workers, in addition to transportation from the housing colony to work-sites for workers and to schools for children.

The Madhya Pradesh government has two more welfare boards for unorganised workers which it is planning to merge with the construction workers’ board to rationalise the delivery of benefits to workers and reduce administrative burden and costs.

Until the Act’s stipulations are strengthened and followed consistently to ensure that benefits from the Welfare Boards reach construction workers across states, there can be no inclusive growth.

The writer is executive Trustee of CIVIC Bangalore.