Defining, celebrating and protecting our rivers

India Rivers Week held in November 2014 was a first-of-its-kind gathering in New Delhi, which celebrated rivers and those trying to protect them, while charting out a road map to mitigate the threats they confront. Shripad Dharmadhikary reports on the proceedings.
03 December 2014 -

The week of 24 to 27 November 2014 saw a unique gathering in New Delhi. Possibly for the first time in India, social activists, environmentalists, academics, researchers, project-affected people and  grassroots workers all came together to celebrate India’s rivers, and the role they play in  our society, economy and ecology. The gathering was called India Rivers Week (IRW), and was subtitled Rivers in Crisis.

While the reason to convene the Rivers Week may have been the crisis that faces our rivers, the gathering itself was a celebration of rivers, their contribution, and the many struggles and efforts to protect and conserve our rivers.  IRW was organised by the South Asia Network on Dams Rivers and People (SANDRP), INTACH, Toxics Link, WWF and Peace Institute.

The Conference was inaugurated by a keynote delivered by well-known water expert and former secretary of the Central Water Resources Ministry, Shri Ramaswamy Iyer, while Shri Jairam Ramesh, former Minister for Environment and Forest was the chief guest. Minister for Water Resources, Sushri Uma Bharati delivered the valedictory address.

However, some of the most important discussions of the Conference took place between these two high profile events.

While it was not an academic conference, the IRW spent two days on extended deliberations on four key issues – What is a River (defining a river)? What are the essentials of a healthy river? What are the main threats to a river? Last but not the least, what would be a road map to river restoration?

While defining a river might sound trivial, in practice, it has serious legal and regulatory implications. Most of the time, a river is understood very narrowly – only as the water that flows through it. This leads to legally permitted interference in rivers like floodplain encroachment, embankments, the regulation of flows through dams etc.

The IRW deliberations came out with a holistic description of a river indicating that a river is much more than just water, that even the flow needs to be understood down to its constituents such as water, silt and sediment, nutrients; that the floodplains and many  channels entering the river are part and parcel of it; that the aquatic and terrestrial bio-diversity is an integral part of the river; and that a river performs many functions beyond the economic and commercial, including social, cultural, ecosystems and life support.  The IRW has recommended that laws to protect rivers be designed keeping this holistic understanding in mind.

Apart from the more commonly understood indicators of a healthy river like clean water, absence of pollution, maintenance of flows and well preserved bio-diversity, the IRW also emphasised that it is absolutely critical to preserve the form of the river – its natural banks, its  cross section, and its three connectivities – longitudinal connectivity (along the length of the river), lateral connectivity (with its banks and with its flood plains) and vertical connectivity (with groundwater regimes).

While threats are better understood, the IRW reiterated that a roadmap to river preservation and restoration will have to include a radical rethinking of the traditional approach to river ‘development’ that is essentially focussed on dams, barrages and embankments, large scale diversion of water, and which results in unabated pollution and reckless destruction of river resources, for example through sand mining, floodplain encroachment etc.  A new approach would have to ensure that the river has the first right to its waters, and must maintain its form and connectivities.

The IRW has summarised these deliberations in a comprehensive document called the Delhi Declaration on Rivers, which will be released shortly.

While the IRW deliberated on how to restore and preserve rivers, undoubtedly the highlight of the conference was the recognition of the valiant efforts of those who are struggling to actually do so in the field. The IRW established the Bhagirath Prayas Samman (Recognition of Heroic Efforts) and presented the first of these awards to three efforts – one organisational and two individual.

The Koel Karo Jan Sangathan was given the award for its “long and heroic struggle in the face of enormous pressures from vested interests, battling tremendous odds to forge one of India’s foremost resistance movements.”  The Jan Sangathan has been fighting the 710 MW Koel-Karo hydroelectric project in Jharkhand and has successfully stopped it since 1976.

The first individual award was given to Akhil Gogoi of Krishak Mukti Sangram Samiti (KMSS), who has “successfully utilised the Right to Information Act in conjunction with mass mobilisation of communities with respect to ill-conceived projects in river Subansiri (Assam) that could threaten their life, property and livelihoods”. 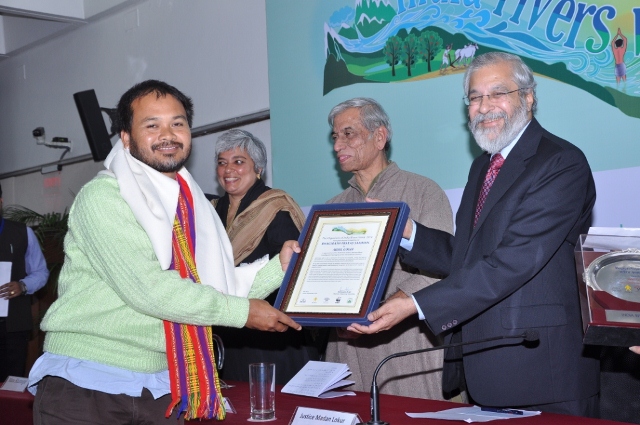 The government had to make many changes in the construction and operation of the Lower Subansiri project and work on the project has remained stalled for close to three years now. The struggle of KMSS has highlighted the downstream impacts of such large dam projects.

The second individual award was given to Dr Latha Anantha of Chalakudy Puzha Samrakshana Samiti (Chalakudy River Protection Committee), who has worked to safeguard the integrity of the river Chalakudy (Kerala) for "her exemplary capacity for combining sound research with the mobilisation of community, political and state agencies, and for ushering in a unique methodology of consensus-based conservation of rivers in the country".

Their group has been able to stop clearance to the Athirapally project on the Chalakudy for close to two decades now and has helped preserve the stunningly beautiful Athirapally waterfall.

Hope for the future?

It is interesting that the remarks of Sushri Uma Bharati, Minister for Water Resources also included some of the new and emerging concerns. She said that the approach to rivers of the new government would be guided by three important conditions.

One, that it will ensure the maintenance of aviral dhara (uninterrupted flow) in all new river development efforts, and will give close consideration of what can be done in case of rivers that are already dammed. For this, “river, season and site specific” environmental flows will be worked out.

Second, the government will not allow any sewage – treated or untreated – to enter a river. And third, it will ensure a gradual shift among industry towards meeting all its water requirements through treated and recycled water.

The minister also mentioned that her government would proceed with the Inter Linking of Rivers Project – about which the IRW had many serious reservations that were conveyed to her – only if it did not destroy the environment, if the state governments gave their consent and if such interlinking did not violate international trans-boundary water sharing principles.

While these are very welcome initiatives, the real test will be in how the government defines and implements these. For instance, while the government is giving increasing importance to environmental flows, it continues to define them in an ad hoc and inadequate manner. To illustrate, environmental flows need to include flows of sediment and nutrients too, and not just water, which is being largely ignored.

Such concerns will be conveyed to the Minister and Ministry, who invited the IRW to present to her the detailed deliberations of the conference.

However, the importance of the IRW goes beyond presentations to the government. It represents the initiation of an important collective process to work towards protection of rivers in India. The IRW has announced the formation of an India Rivers Forum which will offer a platform for all those working to protect and conserve rivers to come together and work together. It has also resolved that the Rivers Week will be held every year.

Undoubtedly, IRW has highlighted the need for a radically different approach to river development in the country and has offered a mechanism to potentially take forward such efforts in a collective manner.