The accusations of the Intelligence Bureau against foreign environmental NGOs appear hollow and misguided when one looks at the direction and substance of their work in India so far. Darryl D’Monte urges the government to restrict itself to scrutiny of forex norms followed, without stifling the expression of dissent by these NGOs.
26 June 2014 -

Despite cautionary signals from liberal sections of society – not least, NGOs themselves – the Intelligence Bureau’s (IB) report castigating Greenpeace and other green groups for receiving foreign funds and allegedly lowering the economic growth of the country has led to predictable consequences. In the IB’s words, the opposition to mining and genetically modified (GM) crops poses a “significant threat to national economic security”.

This unprecedented and indiscriminate condemnation of these environmental groups made it clear that it would only be a matter of time before the Home Ministry started to scrutinise the permissions granted under the Foreign Contribution Regulation Act (FCRA).  Ostensibly, the review was to ensure that “funds meant for education cannot be used for advocacy”.

This textbook dichotomy makes no sense at all: who can distinguish where an awareness (education) campaign ends and an advocacy (action) campaign begins?

The singling out of Greenpeace India, in particular, is most unfortunate. While one may have differences with some of this agency’s militant methods – which in extreme cases expose its members to risk of life and limb – there is no denying that its motives are completely in sync with those of genuine environmental groups.

For many years, Indian greens believed that the wide and diverse green movement here would preclude a “foreign” agency like Greenpeace or the less radical Friends of the Earth International from functioning. However, Greenpeace entered the country in 2001 with a bang and established its credentials not only by campaigning aggressively against big energy and mining projects but also by funding some of its activities by charging a small yearly subscription fee from as many as 1 million subscribers.

If one trawls through Greenpeace’s international history, the most celebrated case was the sinking of its ship, Rainbow Warrior, in the port of Auckland, New Zealand in 1986, coincidentally the same year that saw the Chernobyl atomic power plant accident.

The flagship Warrior led a small fleet to protest against the nuclear tests being conducted by the French government on the Pacific island of Moruroa. A photographer on the ship died when it was sunk. Two French secret service agents were arrested by the New Zealand police and the scandal eventually led to the resignation of the French Defence Minister, Charles Hernu.

One has only to see the stakes involved in this international cause célèbre to judge the calibre of Greenpeace. The NGO made it clear that it was not identifying targets only in the developing world in general and emerging economies in particular by taking on France, the country which to this day generates the highest proportion of electricity through nuclear power.

At the time when the Warrior was sunk, French nuclear tests in the Pacific were banned. Following the global furore over the attack, the French government paid Greenpeace $8.16 million in damages in 1987.

To set the record straight, Greenpeace has not always proved infallible in the past. In the mid-1990s, it launched a worldwide campaign against Shell (UK) for attempting to dispose of some 5,500 tonnes of oil in the ocean from its North Sea storage platform and tanker loading buoy called Brent Spar.

Its activists occupied the site for some three weeks. There were widespread boycotts of Shell petrol stations throughout northern Europe, including physical attacks and an arson attack against a service station in Germany.

Shell suffered grave losses, not to mention the loss of its reputation. Later, it was found that Greenpeace had grossly overestimated the amount of oil that would have been released into the sea following the decommissioning of the platform. It was removed to a site off Norway, while Shell lost up to £100 million in the process.

While Greenpeace lost a great deal of credibility over this fiasco, it should be remembered that the very fact that the environment-conscious north Europeans took it at its word in the first instance was because it had fought several campaigns against dumping of toxic wastes in the North Sea since the 1980s.

This included using strong-arm tactics to physically hinder the dumping of radioactive waste and waste from titanium dioxide production, and lobbying for a comprehensive ban on ocean dumping under an international convention.

The journal Nature carried an editorial against the NGO, while Lord Melchett, executive director of Greenpeace UK, wrote in New Scientist magazine, "Greenpeace made mistakes too. We allowed ourselves to follow the agenda set by the Department of Trade and Industry, Shell and the media – too often getting into arguments about the potential toxicity of the Spar.”

Closer home, the single biggest complaint of the IB against Greenpeace for holding back the country’s economic growth has been its campaign against the Mahan site for a coal mine in Madhya Pradesh. Earlier this year, the NGO criticised the manner in which the state government had allocated this block to Essar Power and the Aditya Birla group company Hindalco, without observing due process for acquisition of such land.

These allotments had earlier been denied permission by the central government but later given the green signal without any explanation. In 2012, the NGO cited how the allotment denied protection of the land under the Forest Rights Act, threatening the status of some 14,000 adivasis who depended on these forests for their livelihood.

The Mahan Sangharsh Samiti (MSS) was formed in 2013 to protect the forests and land from coal mining. Since then, the MSS has expanded to 11 villages and garnered the support of the erstwhile Minister of Tribal Affairs, K. C. Deo, in the UPA government as well as civil society groups. 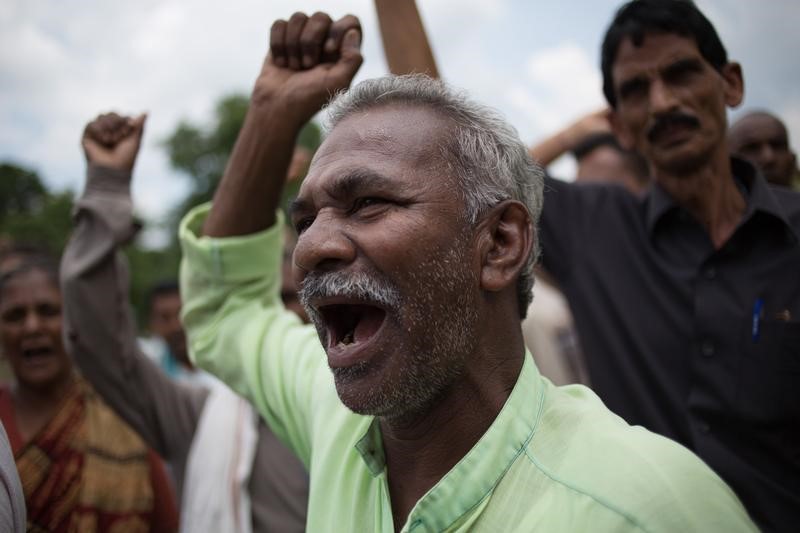 A meeting of the Mahan Sangharsh Samiti in 2013. Pic: Greenpeace India

Madhya Pradesh chief minister Shivraj Singh Chauhan had earlier lobbied with then environment minister, Jairam Ramesh several times to get the coal block cleared. But the MoEF had denied clearance due to environmental concerns, saying that such clearance would "open the doors for other coal blocks to be mined and would fragment an area very rich in forest cover".

This January, Essar filed a Rs 500-crore suit against Greenpeace for defamation and sought to silence its protests. This followed its sensational demonstration where 14 activists posing as cleaners went up to the terrace of the 21-storey Essar headquarters in Mumbai, overlooking the Race Course, and lowered themselves from the top, where they unfurled a huge banner.

An Essar spokesperson said, straining credulity, “These people suspended themselves from the top of the building. In doing so, they endangered the lives of those working in the building and disrupted the normal working of the employees.” As in other such dramatic actions elsewhere in the world, Greenpeace certainly helped to focus attention on the case at stake.

Public memory being proverbially short, it is important to remember that this Mahan coal block was among the 155 that came under the scanner of the Comptroller and Auditor General (CAG). The “coalgate” scam was variously estimated at Rs 1.86 lakh crore and much above. One must also recall the problems that Adani faced from the Maharashtra Forest Department when he wanted to mine coal in the Lohara forest in Chandrapur.

Greenpeace along with many other national and local groups are campaigning not only against the acquisition of forest and other land for these coal mines, but against the emissions from coal-fired power plants.

In a study of precisely this damage in India, Greenpeace found that in 2011-2012, emissions from Indian coal plants resulted in 80,000 to 115,000 premature deaths and more than 20 million asthma cases from exposure to total PM10 suspended particulate matter (roughly speaking, dust particles) pollution.

The study quantified additional health impacts such as hundreds of thousands of heart attacks, emergency room visits, hospital admissions, and lost workdays caused by coal-based emissions.  The study estimated that the financial cost associated with these health impacts exceeded Rs 16,000 to Rs 23,000 crore (USD $3.3 to 4.6 billion) per year.

The IB and others of its ilk appear to be blissfully ignorant – if not unconcerned -- about this huge economic cost every year, let alone the human toll.

It should be noted, however, that the country now has an important precedent for adivasis and other people, who stand to be evicted due to a large mining or other project, to have their voice heard before such eviction. Last year, the Supreme Court permitted 12 gram sabhas to be heard on whether they would permit the mining of bauxite in the Niyamgiri hills for the London-based Anil Agarwal’s Vedanta group, which wanted to set up a Rs 5,000-crore aluminium refinery at Lanjigarh in Orissa. Rahul Gandhi had supported the protesters, saying that the project should not impact the lives of poor people. The public hearings stopped the mining.

However, the erstwhile editor of the Indian Express, Shekhar Gupta, in a piece detailing the fall of the rupee against the dollar, had written:

“At 3.5 billion tonnes, India has the third largest bauxite reserves in the world. India is now likely to become a bauxite importer to feed its refineries that produce a bare 1.5 million tonnes of aluminium while China, with no bauxite, produces 20 million tonnes... If you think mining is so immoral, do ban it by all means. But then accept the dollar at a hundred rupees. Or get Greenpeace to fund your current account deficit.”

This is certainly the view not only of the corporate elite, but of many millions who voted Narendra Modi to power on his “development” platform.

In reality, far from posing a threat to the economic development of the country, these NGOs are acting as watchdogs to ensure that the due process of law is followed. As the actions of Greenpeace and others of its ilk, such as Friends of the Earth International and Survival International, in the environment/development discourse show, these agencies are challenging the neo-liberal policies of governments in the global North as well as South and pressing for alternatives to these development models.

As anyone who has followed the interminable debates since Copenhagen on the global climate change policies knows, the green international NGOs always champion the rights of developing countries. By the same token, they do not hesitate to point out the failings of such governments in working against sustainable development.

One can only hope that better sense will prevail and that the Centre will dismiss the allegations of the IB as unfounded, even if it does scrutinise the Foreign Contribution Regulatory Act provisions more carefully. Dissent is being smothered, as witnessed in the bans and withdrawals of several books and manuscripts. India will not live up to its reputation of being the world’s largest democracy if its government, often aided and abetted by chauvinists and obscurantists, stifle freedom of express in such a blatant manner.