Lessons up the hill

An empowered committee of the Supreme Court calls for the blacklisting a construction firm in Himachal Pradesh, after noting that state officials probably connived with the developer in violating conservation and development laws. Kanchi Kohli reports.
31 October 2008 -

On 18 September 2008, the Central Empowered Committee (CEC) of the Supreme Court's Godavarman bench finalised a set of well placed, straightforward and strong recommendations in Application No.1018 - which dealt with the irregularities in the construction of a parking lot and a bus stand in Mcleodganj, Himachal Pradesh.

This is a case I have written about previously in India Together (see here and here), and partly this article is a follow-up to the earlier ones. But this update is also relevant for another, important reason. The CEC's report calls for the demolition of one illegal structure, the rectification of another, and - most importantly - blacklisting the project consultancy firm that had carried out illegal activities. If these recommendations are accepted by the Supreme Court, they will set an important precedent in regulating the way construction should take place in sensitive hill stations all across the country. It would also send out a signal to many other violators - and there are countless number of them - that the law may finally be catching up to their brazen-ness.

To recap, the key arguments of this case are as follow: two tracts of forest land had been cleared in 1997 and 2001 to establish a parking lot and bus stand in Banoi Reserve forests. The land diverted for the parking lot was 0.093 hectares and for the bus stand was 0.48 hectares. But the project authorities, M/s Prashanti Surya Construction Company had instead used the land identified for the parking lot to build a commercial complex and a hotel instead. At the bus stand site too, there were major deviations in the construction.

There were three hearings of the CEC in this case on 21 May, 10 July and 31 October - all in 2007. The Chairman of the committee also carried out a site inspection on 27 September 2007. As the case began to be heard by the CEC, some other very interesting and complex facts came to light which took the case beyond the scope of the Forest Conservation Act (FCA), 1980 under which the land was diverted for non-forest use in the first instance. It turned out that violations of many other kinds had taken place.

With all these facts in hand, as well as from the submissions made by the applicants, the allegedly violating company, TCPD and the state government, the CEC report concluded that there have been gross violations of law in this case. And its clarity on understanding the violations is followed by a strong set of observations and recommendations. The CEC report does not mince any words and clearly states, amongst other things that: 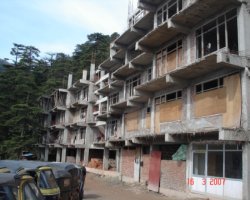 The hotel coming up in place o the parking lot.

Based on these and several other substantive observations and conclusions, the CEC report recommended very clear cut and hard hitting steps. It vehemently states that "there has been absolute anarchy in the matter of construction of the parking space and Bus Stand. At the same time there is a very real need in Mcleodganj for both the parking space and Bus Stand complex on the two pieces of forest land. With a few to finding a way out from this terrible muddle created by the deep vested interests and at the same time ensuring that those who have connived in the serious lapse are not allowed to go scot free the following is recommended.".

To state a few:

This report is still to be accepted by the Supreme Court. If that happens it will send out a very important message to the rampant unproven illegalities that are taking place many of the hill stations across India. The conservation of these pristine habitats is very important to retain their ecological balance. As an MoEF report of 2002 states "Good healthy hill areas, besides being prosperous themselves, also bring prosperity downstream. Similarly, degraded hill or mountain areas bring poverty and drudgery downstream. Therefore, it is important to maintain the environmental balance and economic and social viability of hill areas, both for the sake of mountain inhabitants and for those living in low land areas." (Determination of Environmental and Ecological Sensitivity of Hill Stations- A report by the Ministry of Environment and Forests, 2002).

The wake-up call long ago went unheeded. Now, perhaps the alarm bell will inspire action to remedy that failure.