When kitchen smoke can kill

It has been widely established that the health impact of indoor air pollution, caused often by solid fuels for household cooking, far outweighs the hazards of outdoor pollution. Arpana HS quotes data from the Census and findings from a recent paper to show why India needs to tackle this on priority.

When we talk about air pollution, we most often refer to outdoor air pollution. Industries, factories, vehicles, and mines are considered the main culprits. But what escapes attention in the process is that the air inside our houses, offices, schools is not so safe either.

The World Health Organisation (WHO) has identified indoor air pollution as the greatest environmental health risk, mainly in the developing countries. According to the WHO report, globally 4.3 million people die every year from the exposure to household air pollution. Household products, pesticides, tobacco smoke, building materials such as asbestos and paints have been identified as some of the major indoor pollutants in the developed nations, but combustion of traditional fuel is the main and the most dangerous source of indoor air pollution in developing countries. Women and young children are most affected by these pollutants as they spend most of the time inside the house, near the hearth.

WHO statistics show that more than 50 per cent of premature deaths among children under 5 are due to pneumonia caused by indoor air pollution. Among adults, 12 per cent of premature deaths attributable to household air pollution from inefficient use of solid fuels are due to pneumonia, 34 per cent  due to stroke, 26 per cent due to ischaemic heart disease, 22 per cent due to chronic obstructive pulmonary disease (COPD), and 6 per cent due to lung cancer. Asthma, low birth rate, cataract, perinatal death and stillbirths are some other hazards caused by the exposure to these pollutants.

Studies carried out in India on the health implications of indoor air pollution, as referenced in the paper, unveil many alarming facts: 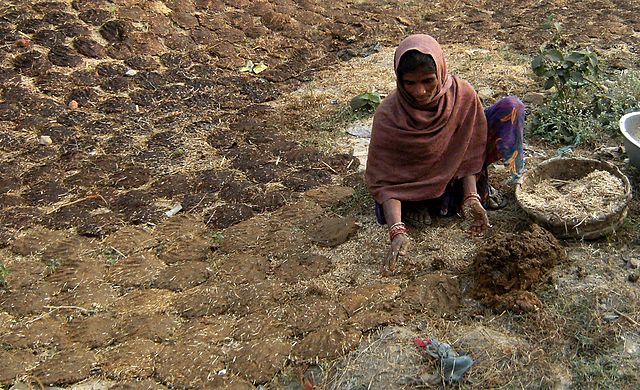 A lady collects cowdung in a Bihar village, in order to shape cowdung cakes to be used for fuel. Pic: Tevaprapas Makklay/Wikimedia

A trend difficult to change

But while all these findings hold enough evidence to link indoor air pollution to increasing morbidity and mortality, the choice of cooking fuel in India is influenced largely by social, cultural and financial aspects. Habit, availability and more importantly, affordability are the main factors which influence the choice of fuel in India.

The principle reason behind opting for biomass combustion is its abundance and the low-price. But, incomplete combustion of biomass result in dangerous air pollutants. The direct combustion of these bio fuels releases pollutants such as suspended particulate matter, carbon monoxide, polyaromatic hydrocarbons, polyorganic matter etc which have adverse effects on health.

Studies cited in the above report have found that when compared to clean fuel using houses, carbon monoxide level is higher than 10 times in the households which use biomass during cooking.  This can be compared exactly to smoking.

Importantly, the effect of these indoor pollutants is even more pronounced because contained areas enable potential pollutants to build up more than in open spaces.

According to the Census 2011, more than 60 per cent of people in India use biomass such as firewood, crop residue and cow dung cake as the main source of fuel. In rural areas more than 85 per cent of households use biomass as cooking fuel by directly burning them. Despite the availability of required raw material in abundance, biogas production and usage is restricted to just 0.41 per cent.

In urban areas, too, though clean fuels such as LPG constitute the main source of energy, the usage of firewood is quite high at over 20 per cent.

Given the factors behind the choice of cooking fuel, which in turn make the transition from traditional biomass fuels to cleaner modes an arduous proposition, the IJCM paper suggests a few measures to curb the menace of indoor air pollution.

Creating awareness about the health implications of using biomass as cooking fuel is suggested as a crucial step in the control procedure. People should be made aware about the serious threat that these solid fuels pose to their health and wellbeing.

It also recommends a change in the pattern of fuel use, through promotion of alternative cleaner sources of energy, such as biogas. Instead of direct combustion of a cow dung cake, producing gobar gas using the same cow dung can be a healthy alternative.

Other steps include modification in the design of the cooking stove to make it more fuel efficient and smokeless and improvements in ventilation by providing window above stoves or cross ventilation through doors.

Such interventions will not only lead to healthy living, but will also help in improving social, financial and environmental conditions of the masses. However, as the authors rightly point out, developing a comprehensive programme to implement these in practice, and effectively so, would require a “determined intersectoral coordination towards promotion of public health.”

Arpana H S is a freelance journalist, with vast experience in broadcast journalism.