Ash everywhere; in your food and water, too?

Fly ash, the residue from coal used in thermal power plants, is not only a headache for plant operators; its use in agriculture and other sectors violates environmental sanctity and poses a serious risk to human health. Shripad Dharmadhikary studies a new CEA report to bring us more.
14 April 2014 -

A few years ago, I was visiting the village of Balaram Prasad, near Angul in Odisha. A non-descript village, one like thousands of others in the country. But it had the misfortune of being close to a thermal power plant, or rather, near the ash pond of a thermal power plant. The people of the area were plagued with the menace of fly ash.

One of the citizens described their plight thus: “The ash is everywhere. When the wind blows, everything is coated with a layer of white grey ash. The road, ponds, our houses, sometimes even our spectacles get coated with a fine layer of the ash.” In view of the serious impact on their health and agriculture, the people have been protesting continually against the problem.

Unfortunately, neither are the people of Balaram Prasad alone in their misery, nor does the menace show any signs of ebbing. Indeed, fly ash has become a plague for local populations and a headache for the operators of coal-based thermal power plants.

When coal is burnt, it leaves behind ash. India has abundant deposits of coal, and it’s no wonder that a large proportion of our electricity generation is coal based (close to 69 per cent in 2011-12), and a major part of our primary energy is sourced from coal. However, Indian coal is very high in ash content, which could be as high as 45 per cent. When such coal is burnt in the thermal power plant, it leaves behind massive quantities of ash.

Coal ash creates multiple problems. As residents of Balaram Prasad and many such villages will testify, this ash can gravely pollute air and water sources, with severe health impact. This is a serious issue as ash has several toxic elements including heavy metals and also suspected radioactivity.

Coal ash is disposed off in two ways. One is through so-called dry disposal, wherein ash is deposited in ash mounds. The second is wet disposal, where ash is mixed with water to make slurry which is disposed of in so-called ash ponds. Both methods are fraught with several risks, including ash being blown by winds onto habitations, farms and water bodies, and contamination of water sources through leaching, spilling and ash dyke breaches (not to mention illegal discharge of ash into streams, rivulets and rivers). Moreover huge quantities of water and large areas of land are required for such disposal of ash. 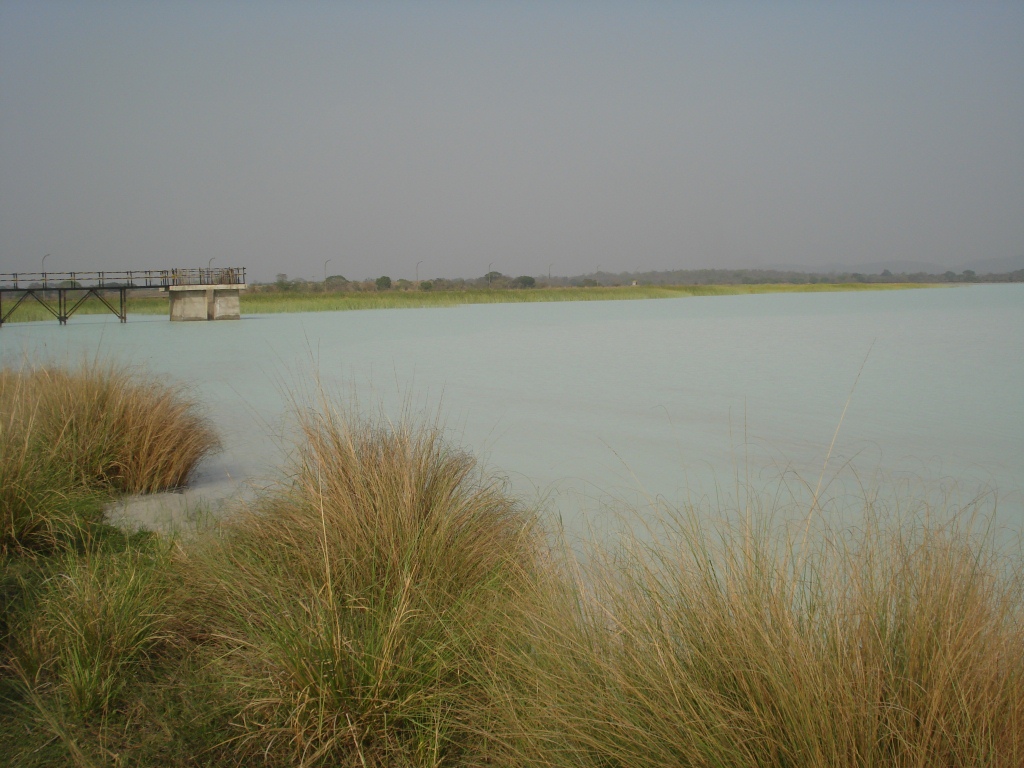 Ash pond of IbThermal Plant in Odisha on the banks of Hirakud reservoir. Pic: Shripad Dharmadhikary

However, there is another way to handle ash. Ash can also be re-used and utilised in several applications. One of the most important avenues for reusing ash lies in manufacture of cement. Such means of reuse offer ways to not only address the ash problem, but also effect savings in other resources. The Central Electricity Authority (CEA), mandated with monitoring such re-use, or “utilisation” as it is somewhat inaccurately called, has recently come out with a report documenting the generation and utilisation of coal ash in the country for the years 2011-12 and 2012-13. The report is titled “Fly Ash Generation at Coal/Lignite Based Thermal Power Stations and Its Utilization in The Country For The Year 2011-12 And 2012-13.”

On the face of it, the picture presented by the report looks optimistic, but a deeper reading shows that the ash problem not only remains a serious issue but is likely to be aggravated.

Utilisation of fly ash in the country

As per the report, out of this, 100 million tonnes, or 61 per cent of the ash was “utilised”. This is a large quantity. Considering that the percentage of ash utilisation was only 15.7 per cent in 2000-01, and 58.5 per cent in 2011-12, the achievement this year sounds impressive and gives rise to some optimism.

But a deeper look shows this to be unfounded. There are several reasons for this. First, even with a utilisation of 61 per cent in 2012-13, some 63 million tons of ash remained unutilised and had to be disposed off in ash ponds or in dry form.

Second, even though the percentage of utilisation has gone up from 56 per cent in 2010-11 to 61 per cent in 2012-13, the actual quantity of ash remaining unutilised has also grown from 58 million tons to 63 million tons. This is because the quantity of ash generated has been growing every year, and the increasing utilisation is not able to keep up with the annual increments.

However, the most problematic aspect in this entire issue is what constitutes “utilisation”.

The risks from utilisation

There are several ways in which ash is utilised. As mentioned earlier, the term “utilisation” is somewhat misleading, as a large part of what goes under the name of utilisation is really just dumping of the ash in some other place.

The following table gives the various modes of ash utilisation as per the CEA report for the years 2011-12 and 2012-13:

As is seen, the biggest utilisation of ash was in the manufacture of cement. But what is worrying is that some of the other uses do little to address the risk of contamination from toxic elements present in fly ash, and for this reason, have been disallowed by the Expert Appraisal Committee (Thermal)  -- the EAC -- of the Ministry of Environment and Forests (MoEF). The EAC is the expert body that examines all thermal power projects from the angle of environmental impact and recommends whether to grant them environmental clearance or not, and under what conditions.

“Regarding use of Fly Ash in agriculture, the Committee also expressed its strong reservations considering that the available information is limited and not supported by long term scientific study. Considering that fly ash is reported to contain about 48 elements including radioactive elements and toxic heavy metals (in mild dose), the Committee advocated that unless scientific study rules out long term adverse health impacts, as such, this method of fly ash disposal shall not be resorted to.”

Despite this explicit note and the fact that the suggested studies have not been carried out, power plant operators continued to “utilise” ash in agriculture, meaning that the ash was dumped in the fields of farmers, unmindful of the serious risks associated with it. Not only that, the use in agriculture went up dramatically in the last two years, with two and half million tonnes of ash being used in agriculture, up from 0.88 million tonnes. It should be kept in mind that the toxic elements of the ash will enter the food chain through such “utilisation”.

Another worrying “utilisation” is “reclamation of low lying areas”. This is often an euphemism for dumping of ash anywhere. Just as in utilisation modes such as agriculture and filling of mine voids, this too leaves ample scope for the toxic elements to leach out into water sources, or even spread through the wind.

“It was pointed out that over a period of time due to weathering action heavy metals or radioactivity content increases manifold when fly ash is left open in fields. It was, therefore, of paramount importance that a detailed study...be carried out before advocating promotion of fly ash for utilisation in agriculture, reclamation of low lying areas [or] as mine void filling”.

For the thermal power plants that are now coming up for approval, the EAC is generally laying down the condition that no ash shall be disposed of in low-lying areas or used for mine void filling.

In spite of such clear articulation of risks, huge quantities of ash continue to be “utilised” in such risky manner, without the studies suggested by the EAC being carried out. The three modes of mine filling, reclamation of low lying areas and agriculture together saw 25 million tons of ash being used in the year 2012-13.

This does not mean that other means of “utilisation” will be completely free from risk. One of the major risk factors identified in coal ash is the presence of radioactivity. While use of ash in manufacture of cement or fly-ash bricks may “fix” or “bind” the ash, so that toxic elements can’t leach out, such products will still remain prone to the risks of radioactivity.

On 20 September 2011, the National Green Tribunal passed an order in a matter related to the Koradi thermal power plant near Nagpur. In this order, the Tribunal ruled that:

The EAC is now levying conditions  to the effect that thermal power plants must monitor the radioactivity (and heavy metals) in fly ash and in water bodies around disposal areas; in several cases, it has even demanded that ash supplied to brick manufacturers be tested for radioactivity.

The CEA knows of these risks, and its report acknowledges – albeit in one small paragraph – at least some of what the EAC has ruled and the conditions it is imposing. But it hides behind a technicality by saying that “These conditions are contrary to provisions in MOEF’s own Notification of 3rd November, 2009 on fly ash utilisation and are going to have adverse impact on the pace of fly ash utilisation in the country.”

CEA then calls upon the MoEF to review these conditions. It’s pertinent to note that the EAC itself has asserted against the use of such technicality by noting, in its meeting in September 2013, that a project has been “carrying out mine void filling activity which is undesirable irrespective of existing legislation permitting mine void filling.” (emphasis added)

While the EAC has been increasingly stressing the risks inherent in any use of ash, and has been suggesting studies and attaching conditions for such use, its approach is still piecemeal and targeted towards individual projects. Further, the EAC only has an advisory role and the final decision is the MoEF’s.

Given this, and given the increasingly clear and serious risks involved, what is required is comprehensive and detailed study initiated by the MoEF in relation to risks from all “uses” and all forms of disposal of coal ash. Such studies should be carried out by independent and credible institutions.

Meanwhile, ways to restrict the further generation of ash will also have to be thought out, at least till the outcome and recommendations of these studies are known. This is also what is required by the Precautionary Principle, which is now recognised as a pillar of Indian environmental law.