As Gram Panchayats in Karnataka go to the polls this year, Madhavi Rajadhyaksha explores the untapped potential of these grassroots institutions and suggests ways in which their capabilities may be leveraged and capacity strengthened.

It was through a popular mandate that Vasantha Kumari, a resident of Chiyandahalli village was elected as a member of the Oorkunte Mittur gram panchayat in 2011. A mother-of-two, she only vaguely knew about the panchayat as a body, till then. “When we entered the panchayat (office) for the first time, fellow members and I didn’t receive any training from the Panchayati Raj (sic). To be frank, we didn’t know the roles of the President, Panchayat Development Officer (PDO), or Secretary or what was meant by ward meetings.”

Anguish is writ on her face as she recalls how the previous panchayat too hadn’t left behind any trail of useful reference documents to learn from. “We didn’t know which books were stocked with the panchayat or what information was contained in which register. We knew the Karnataka Vikas magazine came in every month but didn’t know its purpose,” she says.

Unfortunately, the arduous experience that Vasanthamma faced isn’t unique. From one gram panchayat to another, elected members narrate how PDOs have no time to handhold new panchayat members as they are often entrusted with the responsibility of three to four gram panchayats at one go. Standing committees mandated by the law are often functional only on paper. Panchayat secretaries, who could provide a helping hand, too are overburdened. At the other end of the spectrum, Members of Legislative Assembly (MLAs) are rarely spotted in villages except during election season.

Like Oorkunte Mittur, 5,627 gram panchayats in Karnataka are going to elections in May this year. But the experience of panchayat members is illustrative of the huge challenge that lies ahead.

Gram panchayats as institutions are vested with a wide array of responsibilities and are the repository of funds flowing in from multiple sources including the Central Finance Commission, central government schemes and the state government. The Eleventh Schedule of the Constitution allows states to devolve funds, functions and functionaries to gram panchayats to empower them as institutions of self-government.

In keeping with this, Karnataka, along with a handful of other major states such as Haryana, Rajasthan, Tamil Nadu, West Bengal and Chattisgarh, has devolved as many as 29 administrative functions to the level of the gram panchayat. These include responsibilities for health, education, nutrition, rural housing, forestry, drinking water and sanitation, among others.

The transfer of functionaries in states like Karnataka has however not been commensurate with the devolved functions. In Kerala for instance, government line departments report to the gram panchayat, whereas Karnataka hinges only on the services of the PDO and the Secretary. It is however, pertinent to acknowledge that Karnataka gram panchayats are smaller in size than Kerala which might pose logistical difficulties in placing line department staff in panchayats.

This is in addition to the panchayat’s routine duties in terms of annual planning for village development, revenue collection and citizen engagement through complaint redressal and organisation of ward committees.

As evidenced in Oorkunte Mittur, gram panchayats are often organisationally weak, structurally inadequate and systemically too feeble to be able to handle the duties and responsibilities devolved to them. The systemic inefficiencies have over the years led to a corrosion of citizen faith in their gram panchayats.

Even line departments treat gram panchayats as their extensions, not as duly elected self-governments in their own right, often delegating responsibilities to them without any consultation or compensation for their effort. Not surprisingly, many gram panchayats have merely deteriorated into platforms rife for misuse of power and corruption.

That brings us to the crucial question of how can this challenge be tackled?  The Karnataka Panchayat Raj Amendment committee under the chairmanship of Ramesh Kumar that was constituted to draw up recommendations for amendment of the Karnataka Panchayat Raj Act, 1993 rightly pointed out that we need to shift from “top-down implementation of development schemes” to “bottom-up planning for inclusive development”.

“Activity mapping is required for clearly delineating the role of gram sabha, gram panchayats, taluk and zilla panchayats vis-à-vis funds, functions and functionaries. We should also delineate the powers, rights, duties and obligations of the President and Standing Committees of gram panchayats and other tiers of the PRI as well as those of the paid staff (PDOs & secretaries). Once this is done, all institutional mechanisms should be harmonised with the PRI set up,” advised the committee.

But can these recommendations be put into practice at the grassroots? Interestingly, it is Karnataka which has taken the pioneering first steps to show that this can indeed be done.

An innovative project, the Gram Panchayat Organisation Development (GPOD) has been in operation in two gram panchayats - Oorkunte Mittur, Kolar district and Dibburhalli, Chikkaballapur district over the last four years to strengthen the functioning of village-level elected bodies.

The Karnataka government has recently scaled up this model to 30 gram panchayats in Mulbagal taluka, Kolar district over a two-year period with the aim of improving governance and service delivery to citizens. The initiative in fact bears the distinction of being the country’s first innovation under the centrally-sponsored scheme, the Rajiv Gandhi Panchayat Sashaktikaran Abhiyan (RGPSA).

The model in question was devised by Avantika Foundation, a Bangalore-based non-profit organisation and involves strengthening gram panchayats by using organisation development principles, just as one would do for a corporate or public sector enterprise.

The rationale is that gram panchayats are organisations with tremendous potential that can successfully achieve tangible results if they take a systems approach and strengthen and align the different organisational components such as vision and mission, structure and roles, incentives and resources. Once gram panchayats have worked on their organisation effectiveness mechanisms, the annual plans they develop can be implemented in a rigorous manner with high achievement of results.

“Potentially, with the funds that they have and can leverage, the powers they can exercise and the people resources they can recruit and access, GPs should be able to change the face of rural India. We need to recognise the contributions, which elected members can make, and create enabling environments and incentives for them to function effectively,” says Sonali Srivastava of the Centre for Decentralised Local Governance, Avantika Foundation, who is spearheading the initiative in Mulbagal. 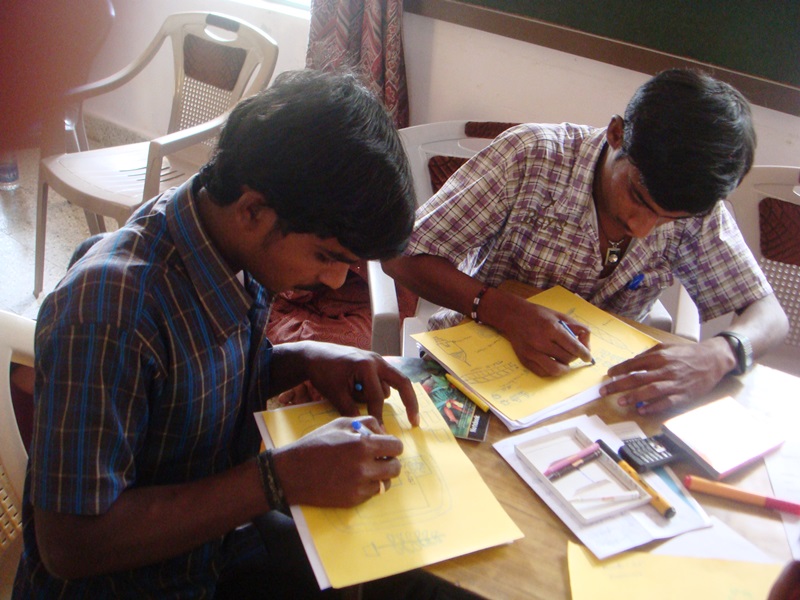 Looking ahead: Citizens from Kamasudram village in Karnataka participate in a 'visioning' workshop to sketch their idea of an ideal village. Pic courtesy: Avantika Foundation

By following this systemic approach, gram panchayats of Oorkunte Mittur and Dibburhalli have gradually spearheaded the development of villages in their jurisdiction, over the last four years. Armed with a clear vision, a delineated accountability structure among elected members and stronger systems, the gram panchayat finds its planning and implementation process fructified to a large extent.

In Oorkunte Mittur for instance, the panchayat managed to successfully revise the property tax tariff after 22 years. In both Dibburhalli and Oorkunte Mittur processes were laid down for the gram panchayat to deliver key services such as drinking water and street lighting, which have resulted in better citizen services.

Thirty new gram panchayats in Karnataka will now further work with this model. Director-Panchayat Raj, Government of Karnataka, S M Zulfikarulla says he is looking forward to kick starting the initiative. "The project promises to inject more institutional efficiency into gram panchayats and will serve to enhance citizens' faith in the panchayati raj system. It will act as a great boost to decentralisation."

With the government now keenly involved, the project will also foster deeper understanding and implementation of government systems such as Panchatantra, Panchamitra and simultaneously work towards better citizen engagement under existing legal provisions such as gram and ward sabhas, social audits etc.

“In all states, panchayats remain woefully dependent on the state for their staff, training and development of physical infrastructure. Most panchayat members spend most of their time negotiating with officers in higher levels of government, rather than carrying out their functions. The true meaning of good decentralised public governance is autonomy at the local level, coupled with responsiveness to peoples’ needs and a willingness to be accountable to people. The GPOD project will go a long way to ensure that the true ideal of Swaraj, or self rule, is achieved in Karnataka” says T R Raghunandan, former joint secretary, Ministry of Panchayati Raj, Government of India and former Secretary, Rural Development and Panchayat Raj Department, Government of Karnataka.

The transformation the panchayats have undergone can perhaps be captured best by the confidence exuded by gram panchayat members like Vasantha Kumari, who has been managing the portfolio of water, sanitation and health in her gram panchayat. She is all set to contest elections once more this April. “I now nurture higher ambitions of contesting Zilla Parishad polls one day,” says a smiling Kumari.

Madhavi Rajadhyaksha is a journalist and Lead-Advocacy with Avantika Foundation, a not-for-profit organisation based in Bangalore that works on strengthening local governance.

Vulnerable to more than the virus
MORE ARTICLES
on similar topics ...
KARNATAKA