Across 20 villages of Bankura and Birbhum districts in West Bengal, 800 families are learning to farm dry land anew in a sustainable manner, resulting in increased income, better health and nutritional outcomes, and food security. Ajitha Menon reports from Bankura.

Tribal families in Bankura, West Bengal, living on a staple diet of potato and rice and occasionally some ‘daal’ (lentils), are now consuming a variety of vegetables, cereals, fruits and animal protein with relish on a daily basis, marking a significant change in the nutrition parameters in one of the most backward districts of India.

The credit for this dramatic transformation goes to the dry land ‘sustainable integrated farming system’ (SIFS), introduced two-and-a-half years ago in the area by the Development Research and Communication Service Centre (DRCSC), a local non-government organisation, with support from Germany-based Welthungerhilfe (WHH) and its Fight Hunger First Initiative (FHFI).

The initiative covers 800 families living in drought, flood and water-logging prone zones across 14 villages in Bankura district and six in Birbhum district. Of the total 897 acres in the project area, 83 acres used to be fallow land at one time. Today, 25 acres has been converted to fertile crop land.

“In the fallow land alone, the villagers are cultivating over 12 types of crops through mixed cropping. These include legumes like cowpea and cluster beans, pulses like pigeon pea, black gram and horse gram, oilseeds like ground nut, niger and roselle, cereals like maize and vegetables like okra and bottle gourd,” informs Sujit Mitra, Coordinator, Natural Resource Management, DRCSC.

Earlier, agriculture was non-remunerative due to the high cost of production, erratic rainfall, mono-cropping and no assured harvest.

“The situation was so dire that we faced three crop damages in five years. Our market dependency was high as we had to buy chemical fertilisers and seeds – and, at times, food, too. Most of us were in the clutches of moneylenders,” shares Paanmukti Soren, 26, of Beriathol village under Jhunjka gram panchayat in Bankura.

Paanmukti is a member of the Jaher Aayu Marshal Mandwa Group, one of the 65 groups set up in the area. Of these, 29 comprise only women and they carry out activities such as setting up grain banks, seed preservation, neem oil production, preparing puffed rice and making ‘saal’ leaf plates. 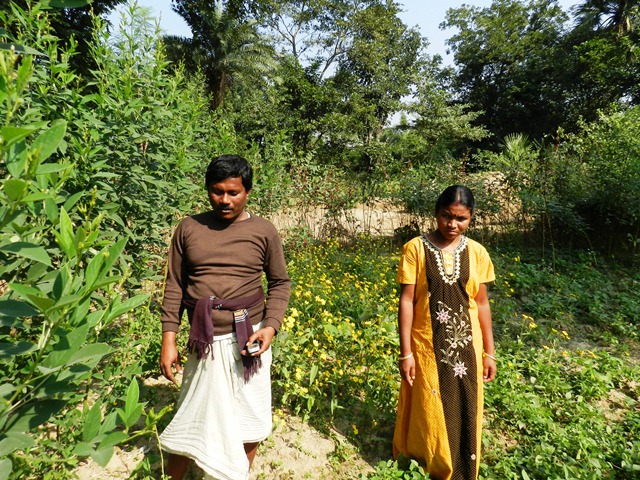 A happy Paanmukti Soren stands with her husband, Subodh, in her flourishing nutrition garden. Pic: DRCSC

Paanmukti and her husband, Subodh, have put in a complete SIFS in place. She grows soyabean, maize, lentils, beans, bitter gourd and other seasonal vegetables in her nutrition garden on the homestead land. On the one bigha fallow land, the couple does mixed cropping, cultivating pulses, mustard, niger and a host of vegetables, while their three bigha low land is used to farm paddy and oilseeds.

In addition, the couple uses dung from their livestock – both poultry and cattle – to create bio-fuel and vermi-compost. “Our four member family is eating four-five different home-grown vegetables daily. Earlier, I used to spend Rs 150 weekly just to buy potato and rice. These days we get animal protein from our own chicken and goat meat and there are plenty of eggs. My seven-year-old daughter is much healthier. Both my husband and I have greater immunity to diarrhoea, fever, cold and cough that were common earlier,” remarks Paanmukti, adding, “The surplus vegetables that I sell brings in some much needed cash.”

A useful technique that the duo has learnt is ‘bosta’ (sack) cultivation wherein sacks filled with mud are used to grow vegetables. “These are placed at the borders of the paddy fields and even in between the rows. The sack absorbs water from the field and vegetables grow very well. This way even if the paddy crop is damaged, we get a harvest of vegetables,” says Subodh Soren, 32.

Adds his wife, “Even the bio-gas is a blessing as I don’t have to scrounge for firewood. I cook in peace without the smoke going into by lungs. My utensils and kitchen are so much cleaner.”

Like Paanmukti, Padmavati Mandi, 38, of Chingri village in Bankura, is a happy woman. This year, although she was unable to plant paddy on her three bigha land due to erratic rains, she has an alternative to fall back on.

“My 14-year-old son and I have learnt to make jaggery from date palm juice. We consume it and also sell it. It brings in some income. Moreover, I took a loan of grains from our Chingri Marang Buru Mahila Dal’s grain bank to see us through the year, which is much cheaper than going to the moneylender,” she says.

Sahadev Murmu, 37, of Beriathol village, Bankura says, “I did not even know that date palm and palmyra palm juice could be used to make jaggery. The training by the DRCSC opened our eyes. My group, Suluk Srijan Marshal Dahar, made five quintal jaggery last year. We sold four quintals for Rs 33,000 and used one for our own consumption to distribute free in the village.”

SIFS is being put to good use by the tribals in the area in different ways. “I use palash leaves as mulch in my kitchen garden. It prevents water from hitting the land directly and has controlled soil erosion that used to be a common occurrence. I also grow papaya, pumpkin, amaranth, okra, turmeric, yam and green chilli in my garden. I had never imagined I could produce so many varieties,” says Purnima Murmu, 35, of Chingri village, Bankura.

Purnima talks of her ‘group’ that has a ‘saal’ leaf plate-making machine that it acquired with the help of the DRCSC. “We go to the nearby Susuniya hills to collect leaves every alternate day and then make plates for sale. It’s a good source of income,” she says.

Several villagers are, in fact, using the mulch system – creating mulch from different leaves and agriculture waste – to grow red potato. It saves labour as the potato grows on the mulch, not underground. “The farmers don’t have to put in too much labour to harvest the crop and the mulch absorbs moisture and retains it so that irrigating the land twice or thrice is enough, instead of the usual 6-7 times,” points out Sujit Mitra of DRCSC.

Mitra points out that Bankura and Birbhum register good rainfall – averaging 1300 mm every year. But most of it comes down as high intensity rain over a short period, which often destroys standing crop and causes severe soil erosion.

Of course, the locals have learnt many ways to utilise this excessive waterfall to their advantage. Rainwater harvesting is one. “I have a polymer tank in which I collect rainwater. In it, I grow azola and use the water in my kitchen garden,” says Paanwati.

Another trick they have learnt is cutting ‘happas’ or ditches to collect water in the paddy fields. “We use this water to irrigate the paddy as and when required. It extends our growing season as we can use the water to grow mustard, wheat, tomato, grams, potato and onions. We also cultivate fish – mostly Indian carp and mud fish – in the ditches,” informs Lakhiram Mandi, 29, of Rangagoda village in Bankura, who is helped by his mother, Padamoni, 55, and sister-in-law, Panmoni, 35.

The results of the dry land SIFS project have been quite amazing so far. Significantly, the availability of vermi-compost has led to a shift from inorganic to organic farming. “Some 279 acres have semi-organic paddy farming and organic paddy cultivation is taking place in 35 acres of the project area. From nothing, it has grown to 11 acres of nutrition gardens, with the average size of the gardens at 40 sq mt. This has improved the health of women, as incidence of anaemia has especially gone down,” says Sulekha Laha, 36, Senior Organiser, DRCSC.

From an average of three to four months of food security to having their homes and granaries well-stocked all year round, these families have certainly come a long way.