An eye for empowerment

Mritunjay Tiwary has brought eyesight to tens of thousands of people through his eye hospital in rural Bihar. But his vision of development extends much farther. Ruchi Choudhary reports.
25 July 2011 -

Akhand Jyoti Eye Hospital is the biggest eye hospital in eastern India. Set up in Mastichak, the hospital identifies and treats the poor and needy people for eye ailments. It started out only in 2005, and treated 10,000 patients for free in the first year itself. Mritunjay Tiwary, who established it, is a successful businessman in Kolkata, with an MBA from XLRI. He decided he would positively contribute to society, and picked rural Bihar - from where his family had migrated to the city.

In his neatly furnished drawing room in suburban Kolkata, overlooking an open terrace scattered with plants, Tiwary talks candidly about the project. It is difficult to imagine a yellow Adidas t-shirt and beige track pants-adorned businessman starting such a venture in rural Bihar. So my first question to him, naturally, is "what prompted you to do this?"

Tiwary traces the genesis of the idea - "I was born and brought up in Kolkata, and used to visit my ancestral place in Bihar about once a year. During one such visit, I happened to go to Kishanganj, where I heard from the rural folk about the kidnapping, selling and siphoning off of young kids to Dubai for trafficking. This was the first time I had seen something of this kind. And I could not sleep for seven days. I think that was the wake up call for me to do something."

"Bihar is where my roots are. And the state has earned such a bad reputation for itself due to poverty, corruption, the law and order situation that I think the need to do something is there. I discussed with my father and guru, who asked me to take up an issue and start working towards this. That's when I decided to focus on blindness, and started this venture in my home district Chappra". He isn't just the founder; each month he spend about twenty days in Mastichak, and is deeply involved in the day-to-day activities of the Trust that runs the hospital.

Although the hospital is primarily a charitable institution, he aims to make it self-sustaining in the long run - in order to do away with the uncertainty of remaining dependent on external funding. The target is to treat 800,000 patients by 2020. By then, he should be able to reach the entire blind population in the state, Tiways estimates. And the hospital too should be able to stand on its own legs thereafter - treating 70 per cent of its patients for free, and charging the remaining 30 per cent.

Although the hospital is primarily a charitable institution, Tiwary aims to make it self-sustaining in the long run - in order to do away with the uncertainty of remaining dependent on external funding.

Tiwary has brought the lessons from his corporate environment to the hospital too. The staff and management are kept updated with the best industry practices. The hospital's records are fully digitised, and all transactions are noted on the computer network. Lectures from experts on general management, health care etc. are regularly organised. The balance sheets are audited by a firm in Mumbai, who can see details of every transaction as soon as it goes online. Tiwary also plans to introduce 'balanced scorecards' - to monitor the work of staff and management - in the system in the coming year. And most importantly, the next rung of leadership in the hospital is ready to steer its way towards taking over from him.

The rigour with which the hospital is run is amazing. Tiwary lets me in on the secret of effective management, "In my opinion, there are three things which are absolutely necessary. You need to have the passion; you just can't do without it. When you roam about in the muddy paths and scorching sun, knowing that you have left behind a comfortable lifestyle, it is the passion which will keep you going."

"Next, of course, is innovation. To develop a successful business model, you need to think differently and constantly innovate," he says. "Finally, you need to follow the best practices in the industry if you want to succeed - this is one of the most important parts where I feel the other charitable organisations don't pay adequate attention to."

At Mastichak, one of the more recent innovations has been introdcution of football, perhaps revealing a shade of the Bengali in Tiwary, despite his Bihari roots!. While working with the locals at the hospital, Tiwary realised that one of the biggest problems of the state is the wide-spread phenomenon of 'male child preference'. From nutrition to health care to education and other needs, young girls are always placed on a lower footing than boys. Tiwary decided to change this.

He recalls the event which sparked the thought in his mind - "One day, I went to the local school to speak to the Headmaster. It was recess time and I noticed 4 or 5 young girls in the corner of a room - playing with a ball made of crumpled paper. I thought they were generally passing time. But when I asked them about what they were doing, they told me they were playing football. I was taken aback. I asked them where they learned to play, and they pointed to the playground in front of the school, where the boys play in the evenings, while the girls merely watched. I was elated, and said to myself that here is a chance to let these girls do what they want".

It was not easy. The parents did not at first agree to allow their girls to play in the field, that too dressed in shorts! Tiwary then made them a deal offering to pay for the girls' education in return, and also holding out the promise of a career linked to this education. He would train them well enough to seek to play for the state or even the country (which is usually also a guarantee of a secure government job!), or he would train them to become paramedics and offer a job himself, with a minimum salary of Rs. 10,000 a month.

That worked, and after about a month, four girls came to play in the very playground from the periphery of which they used to watch games earlier. 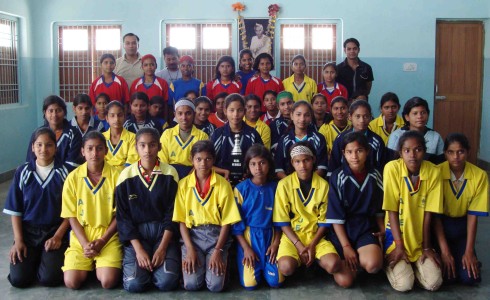 Tiwary (in the last row) with the soccer- and opportunity-empowered girls.

Still, Tiwary decided this was not enough. As long as these girls stayed in the environment of their homes, the could come out of the inferiority shell they had been pushed into, he felt. He proposed to open a girls' hostel, where they could live together in a freer environment. Today, there are 43 girls in the facility, and another 200 are waiting to enrol.

Tiwary himself is an avid football player and has played in first-division club tournaments. He says he is using football as a means to achieve the attitudinal change that rural Bihar desperately needs. There is a proud smile on his face when he says, "Seeing the girls swagger around in the compound fills me with pride more than watching them on the field. From being shy, with their arms wrapped around them, they've become informed and confident individuals. I think football has been instrumental in bringing about this change. They will become role models in their communities - the empowered women of tomorrow."

To succeed in even one of his endeavours - eradicating preventable blindness, or empowering young girls - would be a significant achievement. Mritunjay Tiwary has managed both. How does he find time out of his business and home to stay and work in Bihar?, I ask him. "Somewhere, you have to limit your personal ambitions; otherwise it becomes very difficult to follow this [kind of work]. I have all the comforts in Calcutta, and live very well here, but I sleep well there", he says.

Ruchi Choudhary is a freelancer based in Kolkata.

Our Health, Our Initiative
MORE ARTICLES
on similar topics ...
BIHAR