Where woodcraft is a way of life

Art blends with life through the tradition of woodcraft in Etikoppaka, but the need to sustain livelihoods is ever-present. Neeta Deshpande reports.
04 December 2011 -

Home to more than two hundred artisans who breathe life into wood, the village of Etikoppaka in Visakhapatnam district of Andhra Pradesh has an inspiring story to tell. Here, a visitor is delighted by a diverse range of wooden lacquerware: colourful toys like train engines, curios like bangles, and objects of household use like jars and bowls. However, there is more to Etikoppaka than its wooden bric-a-brac.

In keeping with ever-changing realities, the tradition of woodcraft in the village has reinvented itself through pragmatic experimentation and economic interventions. In more recent times, the use of natural dyes to colour wooden artefacts has poured life back into Etikoppaka's craft, and sustained the livelihoods of its artisans. This essay explores the series of innovations in the tradition of woodcraft in Etikoppaka, in response to shifts in the economy with the passage of time.

In the world of craft, woodwork may seem marginal and esoteric, in comparison with say handloom, which was woven into the very fabric of Indian life. However, the crafting of wooden items for everyday use has always occupied a distinct place in the craft landscape. For instance, Etikoppaka was known for making wooden articles to measure grain for farm and domestic use, as well as temple cars to carry deities in processions. From those times before the 20th century when a range of colours was unavailable, to the explosion of synthetic dyes, to the contemporary return to natural sources, the story of Etikoppaka is one of a persistent effort to uphold a craft form that sustains the lives of its artisans.

Etikoppaka, which literally means a collective of houses on the riverbank, is named after its location on the eastern bank of the Varaha river. It is home to 12,000 people, most of whom earn their livelihood from sugarcane and paddy farming. Woodwork flourished in Etikoppaka owing to the abundant availability of a couple of suitable wood species in the area. Today, the communities practising woodcraft in the village include traditional woodworkers, as well as weavers who have abandoned their traditional vocation due to falling incomes and a lack of market linkages.

Before synthetic dyes stormed the world of colour, Etikoppaka's woodcraft could only be coated red, by dipping the wood in a dye extracted from the divi-divi tree. In the early years of the 20th century, C V Padmanabha Raju - a landlord in the village - sensed a business opportunity in the wooden articles, and explored dyes and processes to make them more attractive and marketable. Due to his efforts, a diverse range of synthetic dyes began to cast their spell on woodcraft in Etikoppaka in 1910. 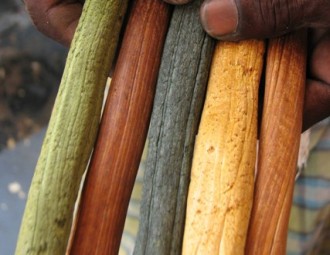 Through exhibitions around the country, a new world of opportunities became available to the artisans of Etikoppaka, where they could imbibe fresh ideas in design. (Pic: A natural palette of dyes from trees and plants).

This transformation was made possible by the mass production of a mindboggling array of chemical dyes in Western Europe in the latter half of the nineteenth century. These artificial dyes displaced the human-scale and ecologically sensible processes of extracting dyes from natural sources.

Padmanabha Raju introduced the application of lac, a resinous substance used to impart colour to wood. Along with colourful decorative pieces and toys, he produced large containers for assorted items required for rituals and marriages. Today, plastic and steel containers are used for marriage ceremonies, which have put an end to the traditional use of wood. One sees parallels here with the decline in the craft of pottery.

By the mid-1980s, employment opportunities in the local sugar mills lured craftsmen away with the promise of higher incomes. To reverse this trend, one of Raju's descendents Chitti Raju encouraged the few remaining practising craftsmen by introducing them to exhibitions that were being held across India to promote traditional crafts. Through these exhibitions, a new world of opportunities became available to the artisans of Etikoppaka, where they could imbibe fresh ideas in design.

Despite these efforts, woodwork artisans were living on the edge in a perpetual battle against poverty, with migration as the only recourse left. Chitti Raju's nephew C V Raju recognised that the legacy of woodcraft in Etikoppaka could soon be relegated to the confines of memories. To bolster the artisans and their skills, he directed his efforts towards obtaining a fair remuneration for their work in both national and international markets. He diversified the product range by introducing toys and decorative pieces, and focussed on improving the quality of the artefacts. Eventually, his efforts bore fruit: the uprooting of artisans from their soil and skill was stemmed.

However, when a few importing countries rejected their products in the early nineties because of the lead content in their synthetic dyes, Raju had a new problem on hand. Determined to find a way out of the predicament, Raju devoted himself to reviving the age-old practice of using dyes extracted from plants and trees.

He explored the fascinating world of trees and the secret dyes in their roots, bark, leaves, rhizomes, fruit and seeds. Beginning with procuring natural dyes from sources outside the village, he was soon on his way to discovering alternative local sources as well. Today he animatedly counts fifteen natural dyes in use in Etikoppaka, including the majestic red of Indian madder and the deep blue of Indigo. These lead-free natural dyes gave a new lease of life to craft in the village.

Though Raju's interventions have helped to support Etikoppaka's artisans, their troubles are far from over. The supply of wood is irregular, as the artisans require a small quantity which does not interest the forest department. It has dissolved the local bodies involved in community forest management plantations and brought them under the control of the forest range officer, which creates impediments in the supply of wood to the artisans.

In addition, after Chinese toys with high chemical content flooded the international market, importing countries have made their norms even more stringent. Add to this frequent power cuts, and the artisans in Etikoppaka are in for another rough ride. A fresh iteration of innovation in line with its tradition of implementing creative, new ideas seems to be the only way out of its current predicament.

As is the case with any other contemporary craft form, the innovations in woodcraft in Etikoppaka endeavour to enable craftsmanship to stay afloat in times when the economic currents flow in the opposite direction. The human and ecological advantages of our traditional crafts have little currency in an age when mass production has taken centre stage. In these times of convenience and consumerism, craft can only survive when innovation is meaningful for both the tradition as well as the market, which is a tall challenge. It is only through such innovation that craft will continue to support the livelihoods of its practitioners, and add meaning to their lives.