The relationship between the two major parties in Parliament has broken down completely. For this both parties are responsible, writes Ramachandra Guha.
15 December 2011 -

When Anna Hazare went on a fast at Delhi's Ramlila Maidan this past August, excitable television anchors announced that we were witnessing India's Tahrir Square. They were wrong. The Indian equivalent of the protests in Egypt (and elsewhere in the Arab world) happened a very long time ago. These were the non-cooperation movement of the 1920s, the civil disobedience movement of the 1930s and the Quit India movement of the 1940s.

Those movements witnessed the participation of millions of Indians. The pressures they brought to bear on the British led, eventually, to the independence of India. But those early anticipations of Tahrir Square were not merely about protesting and going to jail. They were also forward-looking. The leaders of those protests thought deeply about the political forms best suited to a poor, large, and deeply divided society. Their ideas, and ideals, were eventually embodied in the Indian Constitution, which paved the way for a multi-party democracy based on linguistic and religious pluralism.

Our country has witnessed 15 general elections, and countless elections to states that are themselves more populous than most countries in the world. Moreover, unlike in neighbouring countries like Pakistan, Bangladesh, China, and Myanmar - and unlike dozens of African and Latin American nations too the military in India has been kept completely away from the political process.

The protesters in Egypt, Tunisia, Yemen and elsewhere are fighting for what they have not seen in their lifetimes - namely, for an opportunity to elect their own leaders, and for the retreat of the military to the barracks. Ironically, as the people of the Middle East struggle for their first taste of democracy, Indians are working overtime to degrade the democratic institutions that their forebears built and which have now seen us through 65 testing years of independence.

One key manifestation of this degradation is the manner in which legislators treat Parliament. If one dissents from a policy or law proposed by the government, the proper procedure is to speak against it in the legislature. Instead, Opposition members of parliament resort to shouting, screaming, rushing into the well, and even, on occasion, to the throwing of microphones and chairs. By so doing, these leaders think that they are showing contempt for the ruling party - in fact, they are displaying contempt for Parliament itself, and for the voters who sent them there in the first place. 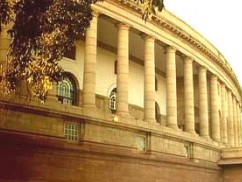 Every disparaging comment by a BJP leader about a Congressman or vice versa has been played repeatedly, which stokes the partisanship.

As this column goes to press, Parliament has been stalled for a whole week. And this is nothing new. Fully 22 per cent of the time of the 14th Lok Sabha was lost due to disruptions. Newspaper reports often flag the short-term financial costs - .17 DAYS OF PARLIAMENT DEADLOCK COST THE NATION Rs 132 CRORES. ran one headline in 2010 -but there are more serious long-term effects. These consist in the delay of the passing of bills crucial to the better functioning of government, to faster and more inclusive economic growth, and to enhancing the provision of social services.

The most recent boycott is the handiwork of the Bharatiya Janata Party. The party insists that it will not allow Parliament to function until the home minister, P. Chidambaram, resigns. Here, the BJP is merely following the example of the Congress, which had, in an earlier Lok Sabha, organized a similar boycott of the serving defence minister, George Fernandes.

As the sociologist, André Béteille, has pointed out, a functioning democracy depends crucially on a relationship of civility between government and Opposition. I write this from the United Kingdom, where an important aspect of democratic functioning is Prime Minister's Questions, where the leader of the government has to answer criticisms posed to him by members of the Opposition. No Briton I know can recall when PMQ was last disrupted or abandoned by the throwing of mikes or the walk-out of members.

In India, however, the relationship between the two major parties has broken down completely. For this both parties are responsible. The BJP has encouraged its leaders to abuse, in the most vulgar way, the prime minister and the leader of the United Progressive Alliance (.Shikhandi. and .Rome raj., patented by Yashwant Sinha and Narendra Modi respectively, come to mind here). The Congress, for its part, has very rarely consulted the BJP on matters of national importance, even where a bipartisan dialogue should be seen as absolutely mandatory.

Pakistan and Kashmir are obvious examples here. So is the lok pal bill. As a consequence of Anna Hazare's first fast, in April, the government set up a 'joint committee' to draft a suitable legislation. One would have thought that some members of the Opposition would have been in the committee. Instead, five unelected civil society activists sat together with five government ministers.

I have focused on the lapses of the Congress and the BJP, but of course other parties are equally culpable (recall only the behaviour of the Rashtriya Janata Dal and the Samajwadi Party over the women's reservation bill). So are Indians outside politics. The behaviour of Team Anna members (remember Kiran Bedi's puppet-and-mime show, or Hazare's statement that all voters can be bribed) has been unworthy of a movement claiming to clean up democracy. Inside some self-styled civil society activists, it appears, there is a petty little dictator struggling to get out.

This partisanship has been stoked by the media. Every disparaging comment by a BJP leader about a Congressman or vice versa, or by a Team Anna member about a politician or vice versa, has been played and played again, thus intensifying the cynicism and frustration of the citizen.

The cycle must be broken. But how? A start can be made by a private, off-camera conversation between a major Congress leader and a major leader of the BJP. Who could these be? The prime minister rules himself out, because by not - even after seven years in office - offering to stand for a seat in the Lok Sabha, he has betrayed his own lack of respect for Parliament.

A more plausible leader of such a initiative is Sonia Gandhi, who has herself won three terms to the Lok Sabha, and who is in political terms more important than Manmohan Singh anyhow. Perhaps she should have a meeting with Sushma Swaraj, also a several-term Lok Sabha MP, and, as it happens, the current leader of the Opposition in the Lower House. This meeting can call for a moratorium on abusive remarks about individuals, and, more broadly, for a regular process of consultation and dialogue between government and Opposition.

Politics is a serious business, whose substance can often be aided or impeded by symbols. In suggesting that Sonia Gandhi and Sushma Swaraj have this meeting I had in mind their respective positions in Indian politics today. But then I remembered that they had fought one another in a Lok Sabha election in Bellary in 1999, an intense, surcharged contest in which some less-than-decorous language was used. For Sonia Gandhi to meet Sushma Swaraj now would thus be resonant with meaning, symbolic as well as substantial. It would be a reaching out, a reconciliation, that may lead in turn to a more civil relationship between their two parties.

The Arabs, who have never had democracy, struggle desperately for it. We, who have had it now for several generations, degrade it in practice and in theory. To restore and renew Indian democracy we must, first of all, restore and renew the dignity of Parliament. For this the suspicion and hostility that mark relations between government and Opposition must be overcome. A ordinary, face-to-face meeting between two women, each with great stakes in this democracy's future, may be a productive starting-point.