Indian political parties have been notorious for their opacity, particularly when it comes to questions of their funding. A recent quasi-judicial order bringing six large national parties within the ambit of the RTI Act 2005 might change that. A quick summary of the latest developments:
05 June 2013 -

In what could well be a legislative milestone of the modern era, the Central Information Commission (CIC) has ruled that Indian political parties should come under the ambit of the Right To Information Act and should lay bare details of their operation and funding for public scrutiny. But given strong opposition from the mainline national parties to the ruling, this is all set to spark a battle at the courts in the ensuing weeks and months.

“.. we hold that INC, BJP, CPI(M), CPI, NCP and BSP have been substantially financed by the Central Government under section 2(h)(ii) of the RTI Act. The criticality of the role being played by these Political Parties in our democratic set up and the nature of duties performed by them also point towards their public character, bringing them in the ambit of section 2(h). The constitutional and legal provisions discussed herein above also point towards their character as public authorities. The order of the Single Bench of this Commission in Complaint No. CIC/MISC/2009/0001 and CIC/MISC/2009/0002 is hereby set aside and it is held that AICC/INC, BJP, CPI(M), CPI, NCP and BSP are public authorities under section 2(h) of the RTI Act.”

In context, under Section 2(h) of the RTI Act, “public authority” means any authority or body or institution of self-Government established or constituted

directly or indirectly by funds provided by the appropriate Government. 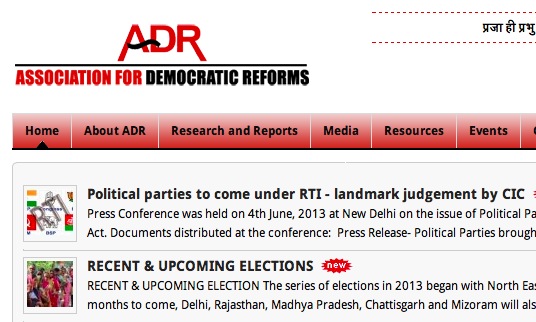 ADR has been doing pioneering work in election watches in the country as well as driving the debate on decriminalising party candidate selection and reform to election rules. Pic: http://adrindia.org/

Roadmap to the judgment

Political parties are not particularly known for their openness or transparency though people have long been demanding to know details of their financial and internal functioning. The history of the present judgment goes back to October 2010, when theADR filed applications under the RTI Act seeking information regarding maximum voluntary financial contributions received by the various parties between 2004-05 and 2009-10 - the sources, modes and amounts of these donations.

Of the six at whom these queries were directed - INC/AICC, BJP, NCP, CPI(M), CPI and BSP - only CPI furnished the sources of ten maximum voluntary contributions received by the Party for the financial years 2004-05 to 2009-10. INC, NCP and CPI(M) responded to the requests saying they were not ‘public authorities’ and hence did not come under the purview of the RTI Act. The BJP and BSP did not respond at all.

The ADR has filed a caveat in the Delhi High Court so as to pre-empt any unilateral stay on the CIC order on the basis of a challenge from one or more of the parties. This now makes it obligatory for the Court to hear the ADR before it passes any order overriding the Commission's.

Based on this, in March and September 2011, separate complaints were filed by Anil Bairwal, National Coordinator for ADR and Subhash Chandra Agrawal respectively contesting the claim that political parties were not ‘public authorities.’ The complainants cited, among other things, details of free airtime on national television and radio granted to parties before and during elections, provision of land and accommodation at concessional rates, state funding on free supply of Electoral rolls to recognized state and national political parties, and exemption on tax payable to argue that the parties were indeed “substantially financed” by the government either directly or indirectly.

In addition, in his representation, Agrawal also pointed out that the political parties hold constitutional status and wield significant powers under the Tenth Schedule of the Constitution, which empower them to decide on various dimensions of public life through influence on legislation and policy. They can oust any elected member of the State Legislative Assembly or Parliament if they step out of the party line. The parties have been given statutory status under Section 29A of the Representation of the People Act, 1951. The allotment of election symbols by the Election Commission to various political parties is also strongly suggestive of the public character of these parties.

In extra submissions made before the Commission, Bairwal also stressed on the need for transparency and accountability in the functioning of these parties by drawing upon recommendations of the Law Commission of India in their 170th Report on “Reform of Electoral Laws (1999)”.

The ADR in its complaint had also pointed to international precedence, as noted in the Scandinavian countries where political parties are declared as public bodies and brought under the ambit of the respective freedom of information laws. In Poland for example, the Law on Access to Public Information in effect from January 2002 allows for verbal or written requests for access to public information, public data and public assets held by public bodies, and private bodies that exercise public tasks such as trade unions and political parties.

An example of data capture and analysis by ADR. Pic: http://adrindia.org/

Since both complaints and ensuing representations related to the common issue of disclosure of the accounts and funding of political parties, and both argued for parties to be considered as ‘public authorities’ as defined by the RTI Act, the CIC decided to dispose of these matters through a common order.

In the ruling, the Commission accepted most of the points raised by the complainants; significantly it noted that for a private entity to qualify to be a public authority, “substantial financing does not mean majority financing. What is important is that the funding by the appropriate Government is achieving a ‘felt need of a section of the public or to secure larger societal goals’.”

The CIC further concludes that the constitutional powers and statutory provisions of the Representation of the People Act, 1951 that vest parties with rights and liabilities also point “unerringly” to their legitimate inclusion as ‘public authorities’ under Section 2 (h) of the RTI Act.

The Presidents, General/Secretaries of these Political Parties have now been directed to designate Central Public Information Officers (CPIOs) and the Appellate Authorities at their headquarters in six weeks’ time. The CPIOs so appointed will have to respond to the RTI applications within four weeks. The bench has also directed the residents/General Secretaries of the six parties“to comply with the provisions of section 4(1) (b) of the RTI Act by way of making voluntary disclosures on the subjects mentioned in the said clause.”

Will the parties challenge the CIC order?  The ADR certainly seems to think that they will seek to secure a stay from the higher courts and has filed a caveat in the Delhi High Court so as to pre-empt any unilateral stay on the CIC order on the basis of such challenge from one or more of the parties. A report on the domain-b site explains that such a caveat now makes it obligatory for the Court to hear the ADR before it passes any order overriding the Commission’s.

While a keen tussle may be on the cards, It would be interesting to see what grounds the parties argue their case on, if at all, given the detailed ruling of the CIC explaining the need for transparency and their inclusion in the ambit of the RTI. “The people of India must know the source of expenditure incurred by Political Parties and by the candidates in the process of election. These judicial pronouncements unmistakably commend progressively higher level of transparency in the functioning of Political Parties in general and their funding in particular,” argues the Commission in its order. It also points out that the RTI Act  “aims to create an ‘informed citizenry’ and to contain corruption and to hold government and their instrumentalities accountable to the governed. Needless to say, Political Parties are important political institutions and can play a critical role in heralding transparency in public life.”

Whether the parties accept such responsibility and role in ushering in a new era of public transparency in India is only for time to tell.