Chiru: A protected species in decline

Despite the highest legal protections, the population of the chiru continues to decline, raising doubts over enforcement standards for the protection of endangered species. Kanchi Kohli looks ahead to the hearing in the Supreme Court, and hopes the court will affirm the basic premises behind conservation efforts.
08 November 2005 -

"In its remote home high in the mountain plateaus of central Asia the endangered Tibetan antelope (Pantholops hodgsonii), also known as the chiru is among the world's most protected species. Ironically, poaching has brought the chiru to the brink of extinction ... For 22 years this diminutive, yet magnificent antelope with distinctive lyre-shaped horns has been classified under Appendix 1 of the Convention on International Trade in Endangered Species (CITES); the highest legal protection for any species. It is illegal worldwide to kill, harm or trade chiru or its body parts: transgressors face several years' imprisonment, a heavy fine or both." Wrap Up the Trade: An International Campaign to Save The Endangered Tibetan Antelope, a study by International Fund for Animal Welfare (IFAW) and Wildlife Trust of India (WTI).

Despite legal protection of the highest order, the population of chiru is constantly on the decline and today the species is extremely endangered. Why? The wool of this shy antelope living in 'untouched' altitudes of 3250-5500 metres is much in demand. It is called Shahtoosh, which in Persian implies, 'the king of wool'. This wool is very soft and light. Traditionally, shawls made of this wool are prized possessions of northern Indian families and are very expensive. The price of a shawl depends on its size, colour, the extent and quality of any embroidery and the purity of the wool. In India pure shahtoosh shawls cost between Rs.35,000 and 250,000. 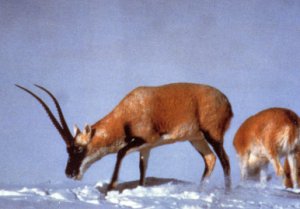 Trade in this wool was always very lucrative and profitable, and has today turned into one of the main threats to the existence of this highly endangered species. There is rampant poaching of chiru, especially across the China border where the largest populations of the species live. Only 200-250 chirus migrate to Ladakh. Therefore, to meet the local demand in India the wool is illegally imported across the border where the shawls are made and then sold. The bulk of the production of shahtoosh shawls is undertaken in Jammu and Kashmir.

Since shahtoosh involves international trade, it attracts the provisions of CITES, to which India is a signatory. CITES is an international agreement between governments to ensure that international trade in species of wild animals and plants does not threaten their survival. Appendix I of the treaty includes all species threatened with extinction, which are or may be affected by trade, and the Tibetan Antelope is included here.

The increase in demand for the shawls internationally has led to unsustainable hunting of the chiru, leading to a rapid decline in its population. Studies indicate that population of chiru has come down from a about a million in 1950-1960 to only about to 65000-75000 in the year 2000. At the outset, this number might still seem substantial but not when one looks at some of these figures closely. The study by IFAW and WTI indicates that typically the making of a shawl for a woman requires killing of three Tibetan antelopes and for the men's shawls, five antelopes. Wildlife organizations concerned with this scenario have for the last several years been trying to get some action against this illegal hunting and trade. While there are some developments taking place on the ground - looking at habitat conservation as well as alternate livelihoods of weavers who were engaged traditionally in making Shahtoosh shawls - there is an interesting set of debates taking place in the courts as well.

A single shawl that measures 1 x 2 metres and weighs about 100 grams requires 300 to 400 grams of raw wool from three Tibetan antelopes.

•  State bird in a perilous state
•  Courser habitat under threat

It is important to note - to understand the legal issues - that until 2002, chiru was listed in Schedule II of the Jammu and Kashmir Wild Life (Protection) Act, 1978, and only limited protection was available. So, when wildlife organizations (Wildlife Protection Society of India) approached the High Court of Jammu and Kashmir for the first time, the chiru was only partially protected as per the State law, in contrast to the central Wild Life (Protection) Act, 1972 which had included it as a Schedule I species granting it complete protection. In 1978 - while the case was being heard in the High Court - through an amendment to the Act, the species' status was revised and it was included in Schedule I, with much higher protections. This meant that there would be complete prohibition on the trade of shahtoosh and articles, trophies, etc. under both Central and State laws.

In February 2003, the petition was disposed off in the Jammu and Kashmir High Court. The key points of the court's order were:

The High Court's findings were a mixed bag; despite observing that the State had given Schedule I protection to the species, no particular action for protecting it was directed. Also, the claim that merely because there is no record of the antelope being killed in the state, there is no trade of its wool or skin is taking place, was incorrect. Illegal imports from China, and the subsequent work of artisans making shawls in the state was not dealt with at all.

In response to this order, in 2004 appeals were filed by wildlife conservationist Ashok Kumar as well as by the Wildlife Protection Society of India in the Supreme Court. These drew the attention of the court to stop the rampant illegal trade of shahtoosh, which is the cause of the poaching of the chiru. It also brought to light the inadequate action by the State and Central governments to check the trade. The appeals highlighted seizures of 16 kilograms of raw shahtoosh wool in 16 August 2004 at Dharchula, Uttaranchal; and on August 1, 2004 in Dubai of 90 shahtoosh shawls and scarves. A complete table of seizures of shahtoosh from 1992 to 2004 including raw wool of chiru were annexed by the petitioner along with other evidence that the trade in shahtoosh has not declined and continued to impact the population of the Tibetan antelope.

In November 2004, the Union of India filed its response and gave the complete legal history of the case. It reiterated that the Tibetan Antelope being a Schedule I species, there is a complete ban on the sale and other transaction of shahtoosh wool, shawl etc. by any other mode except inheritance. Only those shawls can be inherited where the donor is in legal possession of the shawl, which implies that s/he would need to have registered the shawl.

The response states, "the state of Jammu and Kashmir has never issued any license to any dealer or manufacturer for trade in shahtoosh wool. They have also not issued any permit for hunting of Tibetan antelope ... the Import and Export Policy of the Government of India completely prohibits the import and export of shahtoosh". But it also questions the 2003 High Court judgment, which had claimed that no Tibetan Antelopes were being killed for trade in the state, and states that killing is indeed taking place. There is enough proof to indicate that shahtoosh wool is entering India illegally.

In January 2005, a response was filed by Haji Ghulam Wani, President, Shahtoosh Weaver's Association, Kashmir. The response brings to light that there are more than 50,000 people in the state who are dependent on the production of shahtoosh shawls. A large percentage of this are women, either widows or others who don't have any alternate source of income. The affidavit clearly stated that if the manufacturing of the shahtoosh shawl is banned it will put an end to an age-old shawl industry in Kashmir and impact the livelihoods of the weavers who are dependant on it. The response also emphatically stated that the making of the shahtoosh shawl does not involve killing of the animal.

Attempts are being made to ensure alternate livelihoods for shahtoosh weavers, one attempt being switching to pashmina wool on which there is no ban. Also the wool is derived from the pashmina goat and does not involve killing of the animal.

Traditionally, this was indeed true when the demand of shahtoosh was minimal. At that time it is argued that only the male antelopes were killed in the winter months, when their coats were thick. With the tremendous increase in demand for shahtoosh in 1980s from all over the world, the killing became indiscriminate. Since then even the females with thin coats - and even pregnant females - are poached. There is none of the discretion that existed traditionally.

As the final decision on this case is pending, far off in the mountains, the chiru wanders around, perhaps oblivious, perhaps aware of its endangered existence. And for some of us following the debate, myriad questions remain. Conservation efforts - in the form of protection for endangered species - stem partly from basic moral and ethical considerations of inter-species equity, and the understanding that human needs and enterprise cannot survive at the cost of making another species extinct. But what are protection measures, if they are not implemented? What is a threat if it is not recognised? What is conservation, if it is not realised?