China in the strategic debate

India needs a China policy that cannot stampede it into a premature confrontation with that putative superpower. The military too needs to be brought on board, writes Firdaus Ahmed.
27 April 2011 -

China intruded unambiguously into Indian consciousness with its attack of 1962. Its nuclear test of 1964 further consolidated it as a reckonable threat. Its headstart in economic reforms by about a decade, finds India today playing catch up. It is uninspiring that the only significant aspect in which India expects to surpass China is population. Realising this, it appears that India's grand strategy choice is to be more circumspect in its balancing behaviour.

Whether this circumspection is evident in the details, however, is not very certain, given the tensions recently made visible in India's China strategy. The general in command of India's Northern Command has had to ventilate his apprehensions on the presence of Chinese across the Line of Control as being 'part of the string of pearls strategy. This formulation, around for long on the maritime front, has for the first time found mention on the continental front. In reaction, the Foreign Secretary indicated that details of the Army's concerns have been asked for.

This exchange was in the run-up to the meeting of the prime minister with his Chinese counterpart on the sidelines of the BRICS summit at Beijing.

. There are two possibilities. One is that there is an element of design behind the commander going public with the Army's position. This could be as part of India's signaling strategy, in which it uses the Army to make a point without queering the negotiating pitch with the Chinese overly. From the Foreign Secretary's reaction, however, this does not seem to have been the case. Strategic finesse, of employing its instruments to make subtle points, is not characteristic of India's establishment. 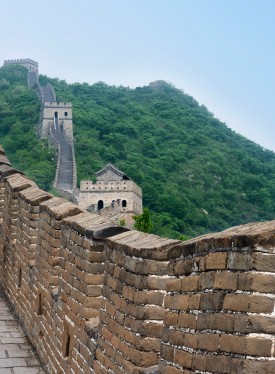 Premature strategic assertion or muscular posturing is not in grand strategic interest since India needs more than a decade to consolidate its agenda of growth with equity.

•  Mine-ing the Brahmaputra
•
•  Govt versus the military

The other possibility arises from a feature of the national security system - in which the Army, feeling left out, needs to make its presence felt if necessary, indirectly. In this case, a charitable view could be that the timing of the Army commander's comment indicates that he was not aware of the Prime Minister's then impending trip. Or that the timing of the remarks was to send the message to the establishment that the Army would like its concerns discussed at the meeting.

What this does indicate is that there are two schools in the ring, when it comes to India's China strategy and its follow-up actions. The first is a more nuanced policy in which India gains time to get its power indices in order. This involves building economic ties, deepening relations with the US and Asian democracies, and getting its triad into place over the decade. The ongoing reaching-out to Pakistan can also be counted in this school's guidance. A subtle distancing from the US is also underway lest India get caught up prematurely in the balancing game between the global hegemon and the challenger.

The second school advocates a more muscular approach to deter China over the interim. This involves military rejuvenation on the China front through force positioning and infrastructure buildup. It seeks a greater interface with the US, including military contacts. It plays up the 'two front' threat mentioned by the former Army chief and taken forward by the army commander, since the northern army quite naturally finds Chinese presence 'too close for comfort'. It does seem that the military is bucking the diplomacy-predominant and economy-centered China strategy.

It is at this juncture that grand strategy needs to kick in. While there is nothing wrong in the military maintaining its position in a democratic system characterised by bureaucratic pulling and hauling, for the military to have a voice within the confines of the system is better. Its understanding that it does not have adequate leverage is what results in its going to the media and the public. The advantage of an in-house discussion, even if no-holds-barred, is in the opposition being carried along once a decision, not necessarily one arrived at by consensus, is reached.

In such discussion the argument can be pitched to the military that while power balancing is important, creating a foe by rushing to balance it is not in Indian interests. This is only to learn the right lessons from the 1962 debacle, brought on in part by India's 'forward policy'. Therefore, a step-by-step China strategy, one in sync with India's development oriented grand strategy and improving power indices over time, is better.

This also caters for the possibility of preventive war that casts a shadow over the medium term. The expectation in realist circles is that the contention with China will only reach a culmination over markets, resources, political prestige and strategic space over the long haul. They therefore advocate an Indian build up over the interim as insurance.

Could China launch a preventive war in the interim to set India back in this race? Realists argue this is not possible in the current circumstances since China would also likely suffer a set back in relation not so much with India, but in terms of its project of parity with the US. Therefore, India is safe from a 'balance of power' point of view in case it were to arm in the shadow of the US, as it is proceeding to do currently.

The problem with such strategic advocacy is that it sets India up as a target for China in the strategic competition with the US. China would use Pakistan to keep India tied down over the near term. This will not amount to forging a nexus with Pakistan, since this can potentially also singe China. Therefore, the twin-front problem is myth making, more to justify the US tilt and for arms expenditure.

In case India were to be assertive, as realists think is necessary for deterrence sake, then the possibility of preventive war by China becomes a probability. The relative gains from such a contest would be in China's favour since it would enter into the conflict better placed than India in terms of military power. It is unlikely that the US could bail India out since it is already battling declining power and economic indices. Chinese confidence in preventive war can only increase as the two power graphs tend to converge over the medium term. Therefore, Chinese strategy would be to let Pakistan box in India in the short term and keep the preventive war option open for the medium term.

What does this imply for India's grand strategy in first place and at one remove its China strategy? Premature strategic assertion or muscular posturing is not in grand strategic interest since India needs more than a decade to consolidate its agenda of growth with equity. It follows that it needs a China policy that cannot stampede it into a premature confrontation with that putative superpower. The military needs to be brought on board both through appropriate organisational measures giving it a voice within the system as also persuading it of the preferred strategic direction.

Apparently this is already the case, with India Today describing the defence minister as 'lone dissenter' in his turning down the idea of Indian military representation in the headquarters of US theatre commands, among other measures to maintain military distance from the US. This indicates sensible balancing behaviour. The gains made in the meeting between the PM and Mr. Hu, that included agreement over a visit by a delegation of the Northern Army to China, is further evidence of successful unfolding of a strategy that can do without the unnecessary buffeting of bureaucratic politics.