A continuous struggle between ‘power’ and the people

In yet another contested environmental approval decision, a 300-MW power plant in Gujarat has been granted changes in technology, relaxing certain original conditions, without any public consultation. Kanchi Kohli reports on the grievances of the local people.
04 December 2014 -

The Bhadreshwar village Panchayat in Mundra taluka of Kutch district of Gujarat has taken a clear decision that no ground water shall be supplied to a thermal power plant in their vicinity.

In a letter written on 27 October 2014 to the State Environment Impact Assessment Authority (SEIAA), the Panchayat has forewarned the authority against the perils of diverted ground water to the plant. This is especially because the district is already water scarce and transferring water for industrial purposes would mean that much less water is available for domestic use.

A background to the contest

This is the newest dimension in a five-year-old struggle of the people from Bhadreshwar village around a 300-MW thermal power plant set up by OPG Power Gujarat Limited. Since 2009, when the public hearing for this plant was first held, the people of the area have been raising objections to its establishment. They’ve taken to the streets, petitioned regulatory authorities, fought long-standing court battles and even fought Panchayat elections with the agenda of opposing the plant.

The company had initially proposed a plant using water-cooled technology, drawing water from the sea by fragmenting an inter-tidal area, especially the Randh Bander (Randh fishing harbour). This area continues to be critical both ecologically as well as in terms of supporting the livelihoods of artisanal fishing communities. The intake channel was converted into a water pipeline following the recommendations of the Ministry of Environment and Forests (MoEF)’s expert appraisal committee. 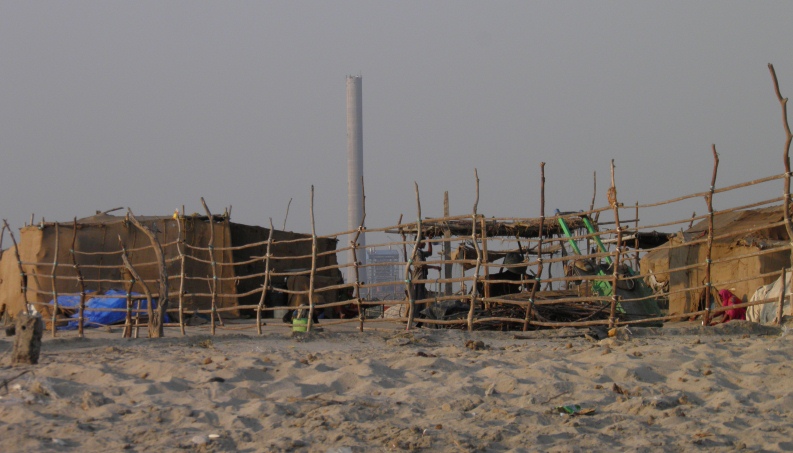 OPG's power plant in the background of the fishing shelters of Randh Bander. Pic: Kanchi Kohli

The people affected, including those representing salt pan owners, filed as many as seven cases before the National Green Tribunal (NGT), trying to safeguard their area from the impacts of this plant and to raise an alarm over the procedural violations of several laws including the Environment Impact Assessment (EIA) Notification, 2006, the Coastal Regulation Zone (CRZ), 2006 and the Forest Conservation Act, 2006.

Upon hearing three combined petitions challenging approvals under the EIA and CRZ notifications and pointing to the fact that construction had been undertaken without seeking approval under the FCA, the NGT allowed the company to pursue a different cooling technology for their power plant.

M/s OPG had come forward in court to say that in order to minimise the impacts, they would like to undergo a ‘mid course correction’ and change the technology from a water-cooled one to one which uses air-cooled fans. This would substantially reduce the water requirement and also make it possible to avoid laying the pipelines all the way to the fishing habour.

The affected people argued that this massive change of technology and the history of violations should render all approvals void and demanded that a fresh assessment be carried out along with a public hearing. A change of technology cannot be tweaked into an approval only through certain additional conditions laid out by experts.

Moreover, the people had evidence that OPG Power did not plan to limit its plant to a mere 300 MW. They had simultaneously sought permissions for expansion of the plant to another 2300 MW. Air-cooled technology is not a viable option for plants of higher capacity.

Following an approval granted by the SEIAA in May 2012, the NGT in July 2013 allowed for the air-cooled plant to be constructed, without any fresh assessment or public hearing. The NGT’s judgment allowing the construction of the OPG plant also did not resolve several other issues that had been raised in the appeals challenging the environment and CRZ approvals. Left with no choice, the affected people now challenged this before the NGT.

As on date, the CRZ approval and approval for forest diversion has also not been officially withdrawn by the MoEF and the state forest department, even though OPG had claimed that the change of technology means that it will not need the land for which CRZ and forest diversion approvals had been sought.

A review petition raising concerns about the NGT’s judgment is currently pending before the tribunal.

The environment clearance letters issued to the company – for the originally planned water-cooled plant as well as the final air-cooled one – clearly direct that no ground water will be extracted for the purposes of the plant, which is one of the specific conditions under which approval has been granted.

According to the letter dated 15 May 2012, the water supply for the air-cooled plant has been determined at “1115.0 KL/day, including 626 KL/day of fresh water requirement to be obtained through water supply from the Gujarat Water Infrastructure Ltd.”

However, the minutes of the meeting of the State Expert Appraisal Committee (SEAC) dated 28 August 2014 shows that the company has now sought a modification of conditions to begin extracting ground water for its plant. The minutes further indicate that though GWIL has allocated water supply to the project, “due to some unavoidable circumstances, they now require to use ground water for their 300 MW power plant.”

As a solution for these circumstances, they have received permission from the Central Ground Water Authority (CGWA) to extract 1950 cubic metres of ground water per day, through three proposed tubewells / dugwells with horizontal bores only.

The decision of the SEAC is pending and in their meeting of 28 August, they sought detailed justification for the change of the condition. They have also asked M/s OPG to explain why they need to extract 1950 cubic metres/day from CGWA, where the total water requirement for the proposed plant is only 1115 KL/day, which may be comprised of 626 KL of fresh water and 489 KL of recycled water. This has been presented along with more scientific calculations and also a study of the geo-hydrology of the area.

Even as expert deliberations are being carried out, the people of the area are concerned. Without even waiting for an approval, OPG Power has asked the Panchayat to supply them fresh water for the plant. After an initial agreement for supply of fresh water to the power plant, the Bhadreshwar Panchayat – the local body – has taken a clear and considered decision, refusing to do so.

In a letter to the SEIAA, the Deputy Sarpanch, Husain Saleh Muhammed points out that allowing for ground water extraction through an amendment of the condition will have a severe impact on the ground water in the region, which is the only source of drinking water for the villages around the area. The letter also specifies that this area comes under the "dark zone" declared by the SGWA (State Ground Water Authority) which is decided by the government, and that salinity is increasing in this area with every passing day.

The Deputy Sarpanch has also been the petitioner in several of the challenges before the green tribunal and had contested elections in 2011 with the objective of safeguarding the lives and livelihoods of the people of his village.

A final decision on this is pending, just as the review petition at the NGT is.

Cases such as this are symbolic of the systemic problem in the practice of environment regulation in India. In OPG’s case, the EIA has been prepared for a water-cooled power plant and this is what the affected people had access to at the time of the public hearing in 2009.

In fact, the marine EIA of the plant was also carried out only post facto and was never fully debated at a public hearing.

The technology of the power plant, its land and water requirements and all possible impact has either been discussed in expert committee meetings or court rooms. This is despite the presence of an active citizenry, demanding fresh reviews and more public participation in decision-making throughout the process.

If the SEIAA and OPG were both convinced that an air-cooled plant was less harmful, and in fact beneficial to the people, why were the people not convinced of the same through a fresh impact assessment and public consultation?

Even as the cases before the tribunal challenging a range of illegalities were pending at the SEIAA, approvals for the air cooled technology were readily granted.  At the same time, construction on the plant continued unabated, as if the company was assured of an approval from the regulatory agency.

Neither agency considered it their legal responsibility to explain, through a full assessment and public hearing, the implications of such a change of technology to the people who would be eventually affected by even the air-cooled plant.

Ironically, as many as three show cause notices had been issued to the company between the period of December 2010 and May 2012, by either the MoEF or the SEIAA, asking them to explain why they did not supply necessary information at the time of seeking approval or why they carried out construction activity without all approvals in place.

Bhadreshwar and the Randh Bander are located in one of the most ecologically fragile areas of the world. In the kilometres-long inter-tidal areas here, dotted with bird life and supporting thriving livelihoods from fishing, the towering chimneys of the power plant symbolise a visible threat that people are fervently hoping they will be able to resist and avert.