A wide-cross section of academicians and civil society organisations have come together to express dissent at the threat of closure of a well known rural school in Bandhyali, Rajasthan. They are demanding that the government honour its own commitments to provide free, good education to all children, reports Deepti Priya Mehrotra.

New Delhi, WFS - The Indian government untiringly emphasises the importance of basic education, yet, paradoxically enough, it is shutting down a path-breaking experiment in high-quality, accessible schooling.

A wide-cross section of academicians and civil society organisations have come together to express dissent at the threat of untimely closure of a rural school at Bandhyali, Rajasthan. They are demanding that the government honour its own commitments to provide free, good education to all children. If the Bandhyali school shuts down, its 325 children (201 girls and 124 boys) will have nowhere to go. Their education will stop right there. 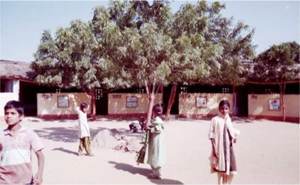 A view of the rural school at Bandhyali, Rajasthan. Pic: WFS.

As a signatory to international declarations at EFA (Education For All) Conferences in Jomtein (1990) and Dakar (2000), India is committed to universalising elementary education by the year 2010. The National Policy on Education (1992) emphasises school enrolment and retention of all children aged six to 14, and substantial improvement in the quality of education offered. While budgetary allocations to elementary education have been increased and policies designed to draw in more children, the government school system remains notorious for its sub-standard, lackadaisical and corruption-ridden functioning.

In sharp contrast, the Bandhyali school has been providing creative, meaningful education. It is one of three schools run by Digantar, a leading NGO, in rural areas of Kho Nagorian, Jaipur district, Rajasthan. Amid a sea of mediocre and sub-standard schools, these schools stand out. Set up at the behest of local communities, they provide high-quality education to children, particularly girl-children, from deprived and marginalised families.

Started in 1979, Digantar's work has been lauded by eminent educationists from India and abroad, and partially supported by the Ministry for Human Resource Development. Which is why there is a ripple of consternation, shock and anger when one of its three schools is threatened - by a government agency - with untimely closure. The Bandhyali school at present has a Damocles sword hanging over it.

At present the High Court has awarded a stay order to Digantar, but the battle promises to be a long and tough one.

•  Included by law, little else
•  Seats reserved, not provided

The Bandhyali school began in 1992 when villagers approached Digantar with the wish to educate their children. Bandhyali village has a sizeable percentage of disadvantaged low-caste Hindu and Muslim families. It had no school in the vicinity. In the beginning, one teacher, Ibrahim, taught a handful of children under a patch of five babool trees, sitting on the sand under the open sun.

In 1993 the village community donated its commons (earlier used for grazing) for the school. A simple building subsequently came up. However, the land is officially owned by the Jaipur Development Authority (JDA). Right in 1993, and several times thereafter, Digantar notified JDA about the school and applied for authorisation. But JDA did not respond to the repeated applications. Instead, a dozen years later, on 2 December 2005, JDA slammed an eviction notice to the school asking it to vacate the land within three days. JDA wants to sell the land, instead, to a private university.

As Rohit Dhankar, Director of Digantar, points out, "It is not a question of one small school closing down. It is a question of children in this country receiving their fundamental rights to education. If this school shuts down, these children will have to stay at home. They have nowhere else to go."

For Bandhyali villagers and Digantar, the land per se is not important. What is critically important is that the school continues, so that children have access to meaningful education. For JDA, however, this land seems important only as a commercial resource.

Like-minded citizens have joined hands to protest this move to demolish what is in fact a model in accessible education, one that ought to be replicated by the wider state network, rather than dishonored and crushed. At present the High Court has awarded a stay order to Digantar, but the battle promises to be a long, tough one.

Ashok Vajpeyi, who retired as Education Secretary, Madhya Pradesh, doesn't mince any words: "Can we remain silent spectators when the government closes down a school that has all the elements government-run schools should have - but do not? The government has been unable to create anything new in the school system. Yet, instead of learning from small experiments like this, it tries to stop them!"

Vajpeyi says that the people of Bandhyali decided to prioritise their children's education, which according to him is a magnificent example of decentralised power, used democratically. He feels that there must be a great deal of support for experimentation and plurality in school education in the country. "The Bandhyali school is a lamp that can light many more lamps. Instead, JDA is bent on extinguishing its light. Rather than respect people's wishes, JDA wants to sell the school land to a private university which has been discredited and thrown out of another state (Chhattisgarh)!" he adds.

Linguist Dr Ramakant Agnihotri, who has been associated with educational programmes at Digantar and other valuable organisations like Eklavya in Madhya Pradesh and Vidya Bhavan (in Rajasthan), points out that Digantar has contributed vitally to educational thinking not only in India, but internationally. "If we launch a satyagraha (struggle using ethical or truth-force) against the closure of Bandhyali school, I will be the first to volunteer. We really need Bandhyali - and many more Bandhyalis," says Agnihotri.

Professor Gita Nambissan, from the Jawaharlal Nehru University, vouches for the educational value of the Bandhyali school. Noting that it has demonstrated the possibility of high quality, creative schooling for a rural population, it should be recognised as a beacon of light in the otherwise dark scenario. The school has a curriculum that develops children's critical faculties, and committed teachers. It provides children with a space where they can flower. Girls and boys learn carpentry, art and sports along with all their academic subjects. When they sit for common examinations at Class 5 level, they fare markedly better than their counterparts from government-run schools.

Bandhyali and adjacent villages, civil society organisations and educationists are determined that the school will not shut down. In Delhi, on 3 January, 2006, about 200 concerned citizens including students, teachers, academicians, social and political activists and social organizations met to voice their dissent, and hand in a memorandum to Vasundhara Raje, Chief Minister of Rajasthan, through the Resident Commissioner at Bikaner House, New Delhi.

"You are mixing up two separate issues. I look after education, I do not look after land."

The memorandum noted that JDA's eviction notice to this community-based school is "...arbitrary, non-transparent and extremely irresponsible.... JDA's insistence on removal of the school would be a violation of children's right to education, and destruction of a very good quality school for the marginalised to favour privatisation of education."

Earlier in February 2005, when schoolchildren from Bandhyali gave a memorandum to Rajasthan's education minister demanding that they be allowed to study in their beloved school, the Education Minister told them, "You are mixing up two separate issues. I look after education, I do not look after land." Right. But for the children of Bandhyali - and a million more in this semi-starved land - the world is not divided into pigeon-holed compartments. They are able to see life whole and ask the right questions, thanks to the critical skills their education has empowered them with. (Women's Feature Service)