Anbe Sivam (Tamil), directed by C Sundar is set in the background of several interlocking themes of our times. Encounters with globalization, economic disparity, religious fatalism and compassion in current day India are all served as part of this soup. At the heart of the movie is a twist to 'God is Love' -- the more humane 'Love is God' phenomenon.

Two travelers - a trade-union activist (Sivam, Padmashree Kamal Hassan), and an advertisement executive (Anbarasu, Madhavan) - get stuck together when their flight from Bhubaneswar to Chennai is cancelled due to bad weather. The primary thread of the movie is the story of their eventful journey to Chennai and their many conversations. The twosome's passage through trains, buses, taxis and inclement weather as well as the widely contrasting lives of India's poor and rich is the canvas on which the director has painted both vibrant comedy as well as engaging public interest perspective. The movie is replete with witty exchanges between the activist and the executive over their disagreements. And disagree they do on just about anything under the sun - God, rich-vs-poor, consumerism and the power of money to name a few. 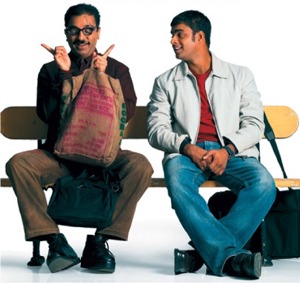 During the journey, Sivam has a flashback into his past love-life. He is an activist for workers empowerment and falls in love with no lesser a lady that the repressive factory owner's progressive and sweet looking daughter, Bala (Kiran). Their encounter and courting unfolds alongside the main theme of the factory workers demanding just wages from the uncharitable owner. You guessed right, the factory owner is our villain (Nasser) and his character neatly mirrors economic exploitation in Indian society -- wealthy employers denying living wages to their workers in the same breath as they recite slokas to the Gods. Sivam is the progressive artist whose team sets up street plays, dance, drama and painting to both empower and sustain the workers' demands.

Before you begin wondering whether this is some activist 'commie' movie, wait. What's interesting about this movie is not merely the treatment of public interest perspectives. Even the rendition of love flings between characters within the artist group is somewhat true to the real world relationship problems within so-called progressive or liberated groups of people. Many people get public-interest minded much before they learn to resolve their own relationships meaningfully, and Anbe Sivam covers some of that ground. Whoever you are -- citizen, government official, social worker, or more importantly an activist -- you will recognize these threads.

At one level, the love story between the poor activist and the rich Bala is a classic one with Bala's dad sending goondas to beat up Sivam. Even more on the beaten track, our hero beats up the goondas, single-handedly. Yet, it is in this familiar context that the more subtle issues play out. The lead lady artist in Sivam's theatre group is in love with Sivam, but as we know our hero has fallen for the factory owner's daughter. Venkatesh, another artist in the meantime falls for the lead lady artist only to be rejected by her, because she is in love with Sivam. So far, nothing new.

The refreshing twist is best seen in the emotional crossfire between the rejected lady activist and Sivam. She tells him that she wore shirts and pants and drove his motorcycle to impress upon him that she was progressive! And this, so that he would not cast her away for being a 'fair and lovely' feminine stereotype, which she supposed that he was not going to like. A clear case of young idealists stretching their liberation idealogy ahead of themselves. This is not to take anything away from our heroine, for the very desi-nari looking Bala does have a compassionate heart and pitches in to help the workers cause, by tricking her father to allow Sivam to paint a massive wall-size activist poster on justice inside their palatial residence!

Another current day combination of ideas finds expression in Anbe Sivam. The workers union is planning to have a major event to project their cause and they need money. They scratch their heads and are running out of ideas, giving a not-so-unfamiliar picture of how unsurmountable the odds can seem when some do-gooders want to raise funds for social causes. But step in, Bala. Sivam's love-painting of Bala is sold by her on the internet and this helps both her fund the workers' event and make a 10% commission on the sale. A can-do entrepreneurial attitude comes to the activists' rescue.

Let's fast-forward to starring twosome's ill-fated sojourn to Chennai. Anbarasu tries his best to get rid of his commie friend's company, only to find out that he is fated to run into him at every possible stoppage along the way. As a globe-trotting executive who is always on a cellphone talking to his fianceé, he makes no bones about how powerful a currency his credit card is. You may get the sense that director has gone out of the way to project the city slicker stereotypes who land up at wayside highway hotels in rural India and expect credit cards to be accepted. But several comical takes on the massive disconnect between the different lifestyles make sure that the simplified stereotyping does not pinch. During one instance, Anbarasu's Italian designer shoes become the only way for the traveling twosome to pay for their meals!

One of the complicated dialogues in the movie is on the point of whether multinational corporations are good for India. The advertisement executive is a great supporter of MNCs because like what has happened to him, the new found wealth is allowing employees to approximate a world-class citizen status. He absolutely loves it. Sivam punches him right back by arguing that large numbers of the labour force are being left in the lurch as a result of MNC driven industrialization.

Whether you are left-leaning or right, conservative or liberal, an avid Kamal buff or otherwise, this movie is likely to entertain and engage you.

There are two other exchanges in the movie that some in the discerning audience may read as the film's efforts to cast communism in a different light. In response to the executive's attack on the activist that he was trying to live a dead idealogy (Communism) because the greatest monument to it (Soviet Union) had collapsed, Sivam hits back by asking: "If the Taj Mahal was destroyed tomorrow, does that mean love will end?" Anbarasu has no answer to this, but these are the sorts of quickfire exchanges that leave an impression on the audience, even though this particular one does involve an oversimplification.

Still, as if to leave the audience with only the most general message, there is yet another exchange that follows between the quarreling two-some where Sivam clarifies that communism is merely a feeling of equality and nothing else! Those who limit their sympathies for Communism as a failed experiment in the centralization of political power (this is true even of the socialism practiced in India) may find this metaphysical interpretation more digestable.

Compassion and the happiness that people derive from it is one of the primary themes of the movie. For example, the otherwise stiff excecutive loosens up under persuasion by a missionary nun and Sivam to spare blood for a dying child. Still, in the treatment of this topic, the film does run the risk of being cliché. Christian missionary run hospitals and sisters are seen doing bulk of compassionate relief work in the pictured accidents, and this contrasts with the ritual ridden hypocrisy that is the essence of the Villain's character. But as the movie draws to a close, the message of humanity has been skillfully generalized. This, through an episode where the Villain's right-hand man undertakes the order to kill Sivam, but he has already had a change of heart and instead turns into a supporter of the activist. The film's ending involves a familiar sacrifice with an unexpected twist that results in a bonus for the beleaguered workers of the factory that Sivam once fought for.

Whether you are left-leaning or right, conservative or liberal, an avid Kamal buff or otherwise, this movie is likely to entertain and engage you. While its political perspectives deftly interleaved with comedy will make this a noteworthy movie, Anbe Sivam really stands for something more. Like a handful of movies that have come before it, Anbe Sivam is evidence that public interest perspectives, progressive and sensitizing debate as well as entertainment can all be rolled into a popular film, without the need for the familiar formulae that cast populist heroes as champions of the downtrodden.