Ban on entry of women into places of worship comes out of deep-seated religious and cultural prejudices. However, a recent development in Western Assam's Barpeta district offers a ray of hope to those in search of justice, reports Teresa Rehman.
20 May 2010 -

Barpeta, Assam (WFS): From time-to-time, women have tried to breach the long-imposed ban on entry into the 'kirtanghar', or the sanctum sanctorum, of Patbausi satra and its neighbouring satras in Western Assam's Barpeta district. Among them were former Prime Minister Indira Gandhi and literary stalwarts such as Amrita Pritam, Nabaneeta Deb Sen, and Mamoni Raisom Goswami. The reason for the denial was to preserve the 'purity' of the satra (a Vaisnavite monastery) which had been out of bounds for women for centuries because traditionally, menstruating women were considered 'unclean'. 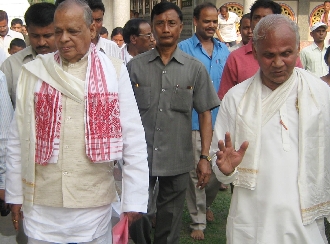 Governor of Assam J B Patnaik (left) at the Assam Satra Mahasabha Conference in Barpeta. Breaking a centuries-old barrier, women led by Patnaik entered the Vaishnavite temple at Barpeta for the first time. Pic: UB Photos\WFS.

But Assam Governor J B Patnaik, who visited Barpeta recently, decided to break the rule and set an example for posterity. The governor was visiting the Patbausi, Sundaridiya, and Barpeta satras in the district. Surprised by the exclusion of women in the satra, he courteously reasoned with the authorities of the Patbausi satra, located some three kilometres away from the Barpeta satra. He then took with him a group of 20 women who were waiting outside to receive him.

These satras or monasteries were founded by 16th century saint Srimanta Sankardeva who propagated Vaishnavism, a sect of Hinduism. But the saint had never discriminated against his women devotees. While the satras located in other parts of Assam allow entry to women, the ones in Barpeta continued to follow this ancient custom. The satra was set up by Srimanta Sankardeva at Patbausi where he had spent 18 years of his life. It was here that he completed the 'Kirtan Ghosa' (religious text). Some of the articles used by the gurus and the 'Sachipat Puthis' (ancient manuscripts) have been well preserved here.

This historic intervention by Governor Patnaik, who also happens to be a Sanskrit scholar, created quite a stir. The public response was mixed. Many were outraged and upset, while a few were relieved that finally a path had been paved for women to enter the satra. There was also an unexpected triumph. A few days later, the management committee of Sri Sri Sankardev Than, Patbausi satra, formally opened its doors to women. And this raised hopes of a similar decision by the authorities of the nearby Barpeta satra.

Surprisingly, the move has been welcomed by the satradhikars, or heads of the other satras. Sri Kosha Kanta Dev Goswami, the head of Sri Sri Chamaguri satra in Majuli, the largest river island in the world, was positive about the decision. "The Barpeta satra should soon follow this. Both men and women have equal rights to a place of worship. Earlier, even the Kamalabari satra in Majuli was restricted to just male devotees but they too opened their doors for women," he says.

Many, however, are of the opinion that the sanctity of the satra and religious conventions need to be maintained. They feel that doing something just for the sake of change doesn't make sense. "I would never want to hurt anybody's religious sentiments. If I am not wanted in that place, I will not go there," says Runima Mahanta, 34, a Barpeta-based housewife.

Others adopt a moderate stand although they may feel humiliated that their husbands are allowed entry while they have been denied the same. Argues Manavee Bordoloi, a lecturer at MC College in Barpeta, "Although Srimanta Sankardev never discriminated against women, I feel modification can be brought about only through mutual discussions and not through any kind of revolution."

The women living in the localities surrounding the satras harbour a lot of superstitions and blind beliefs, which they would be better off discarding."

•  Us, them and us
•  Islamic elegies for social justice

Sahitya Akademi awardee Nirupama Borgohain dismisses the argument that all religious sentiments must be condoned. According to her, if a sentiment is based on a wrong idea, she cannot respect it. She agreed that the move to breach the 'kirtan ghar' by the governor and the women accompanying him was a "bold step". However, she fears that it may just be an isolated incident unless of course there are concerted efforts by women themselves to demand their rights to enter it. According to Borgohain, this is unlikely to happen. The women living in the localities surrounding the satras harbour a lot of superstitions and blind beliefs, which they would be better off discarding."

In fact, many groups who have tried to breach this rule earlier. A group of women led by Padmashree Sheela Barthakur of the Sadou Asom Lekhika Samaroh Samiti, a women's literary body, had in 1988 gone to the satra authorities with a petition to allow women to enter the premises. They were appalled, however, by the fact that a group of women had tried to physically assault them on that occasion.

Guwahati-based social activist Anima Guha, who too was denied entry, is forthright. "It's a matter of shame for us that we had to wait until the 21st century for this to happen. When we had tried to reason with the satra head some time ago, he told us that it is the local women who oppose the entry of women because women tend to be more conservative," she recalls.

Women's entry to religious places has time and again been the focus of controversies. In 2006, a group of women lawyers had filed a petition in the Supreme Court seeking a direction to the Kerala Government to lift the age-old ban on women devotees entering the Lord Ayyappa Temple at Sabarimala. Right from 10 years till 50, women are not allowed entry into the temple as Lord Ayyappa is believed to have taken a vow of celibacy. In 2007, in a radical breakthrough from the centuries-old dress code of Kerala's Guruvayur temple, the shrine's management decided to allow women wearing salwar or churidar-kameez to enter the temple.

Northeast India came into focus in 1988 when the Idgah Masjid, a mosque in the Laban locality of Shillong, the capital of Meghalaya, set a precedent by opening its doors for women. Sayeedullah Nongrum, the general secretary of the Shillong Muslim Union which runs the mosque, said, "Islam is very liberal. Even during Haj, women pray with men; only a partition divides them. If we can send our women to the market, why can't we allow them to enter the mosque?"

It may have taken centuries; but finally, it seems the 'women not allowed' signboards at ancient places of worship are slowly coming down. (Women's Feature Service)