"I wanted to show not just a few victims, but to help viewers understand the mechanics and the politics of trafficking and migration," says Ananya Chatterjee. Shoma Chatterji revies Understanding Trafficking.
19 July 2009 -

Eighty seven minutes is rather long for a serious documentary on one of the ugliest realities of life - the tracking of young women, usually turned into sexual slaves. But Understanding Trafficking does not drag because it embarks on a journey of shocking discoveries about girls who are made to cross their Lakshman Rekhas by physical force, by diabolic manipulation, sometimes, even by their parents and close ones to be sold like cattle in the flesh markets of Nepal, Bangladesh and India. Are these girls 'bad'? Or are they 'good'? Ananya Chatterjee's film drives us to redefine the implications of what 'good' or 'bad' mean for these tragic victims.

The film tracks the trade across Nepal, Bangladesh and West Bengal in India, through interviews with NGO workers, victims of trafficking, victims who have been rescued and rehabilitated, some pimps and agents who pretend to be social activists, and some women who head organisations working to stop trafficking and rescue innocent victims from this illegal trade. Through captive audiovisual shots that go into forbidden ghettoes of the trade, it shows how trafficking is an integral part of organized crime with a long human chain that begins with the girl's family, including her parents, and reaches her to the brothel she has been sold to, to live and die there as a sex worker.

"The project was part of a competition floated by IAWRT (International Association for Women in Radio and Television) over three years ago. I won that competition along with two other international film makers. It is funded by FOKUS, a women and child welfare organisation in Norway. I always wanted to make a film on trafficking ever since I came into film making in 1991. I would like to extend this project both geographically and deeper than its present form," says Chatterjee, who had honed her skills in documentaries with her earlier films on the 73rd Constitutional Amendment, on sexual harassment of women at the workplace, and other topics.

Although human trafficking is illegal in almost every country, thousands of girls become sexual slaves each year. The human trafficking industry has a reported annual income of $8 billion, and the UN estimates that it may employ as many as 40 million women.

•  A stop sign for trafficking
•  This traffic does not stop

What is trafficking? Who is trafficked, by whom, where and how? Are the victims aware that they are being trafficked? What role do the families play? Do they play a positive and reassuring role in the rehabilitation of the girls when and if they come back home? What are the reasons that lead to trafficking? Is it poverty or is it easy money? Is it ignorance - true or pretended, or is it greed? Does it result from lack of education and any earning skills? These are some of the questions Understanding Trafficking raises. It also stresses on the sad fact that no separate and exclusive law exists to punish the trafficking of girls and women for prostitution. Also, no social or governmental infrastructure exists for their rescue, rehabilitation, education, training and mainstreaming of these girls.

Why did she name the film Understanding Trafficking? "I wanted to show not just a few victims, but to help viewers understand the mechanics and the politics of trafficking and migration," says Chatterjee. The film opens with graphics designed and created by Anirban Ghosh. It then moves on to Farah Gherda, a young girl studying in St. Xavier's College, Kolkata, planning to go abroad to pursue her interests in professional photography. She has the backing of her parents to seek fresh pastures. She is distanced from the Lakshman Rekha. - maybe not even aware of its existence. But she is one of the lucky few among the millions of little girls who do have choices to make.

The film tries to explore the differences between sex work and trafficking, migration and trafficking, etc. Through captive audiovisual shots that go into forbidden ghettoes of the trade, it shows how trafficking is an integral part of organized crime with a long human chain that begins with the girl's family, including her parents, and reaches her to the brothel she has been sold to, - to live and die there as a sex worker.

"I have used the metaphor of the Lakshman Rekha because generally, trafficking victims are handled from a welfare-based approach. Women are thought to be weak and vulnerable, needing protection, and it is expected that they should not attempt to venture out. Women and girls are dissuaded from migrating, even to find work, since they might get trafficked. This limits women from exploring their full potential. And if a woman does get trafficked, it becomes extremely difficult for her to reintegrate into society, which blames her for crossing the line. As a feminist, however, I feel there should be no such man-made boundaries to define or confine 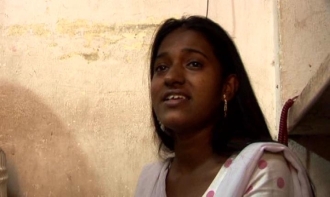 The narrative in the film focuses on both individual lives as well as institutional issues. Juhi, a pretty girl who was trafficked by her 'mother' is shown being rescued from the notorious Sonagachi district of Kolkata and educated by a city NGO Sanlaap, only for her 'mother' to again sell her off to the brothel after claiming her from the NGO. Indrani Sinha, Sanlaap's president, says the organisation works with victims of trafficking, who they try to rehabilitate and put back into the mainstream. One is also introduced to a self-proclaimed social activist named Dipak Prahladka who steps in to 'rescue' Juhi from Sanlaap itself - traffickers often disguise themselves as do-gooders, says Sanlaap.

One of the highlights of the film is a wonderful rehabilitation programme for trafficking victims ventured into by Jabala, a West Bengal-based NGO which works on prevention and rehabilitation of trafficking victims. They regularly organise football camps for the girls. Survivors of trafficking have a lot of anger in them, which they need to take out. So kicking the football is a therapeutic process for them, and playing gives them confidence and becomes a route to empowerment. The camps take place in Murshidabad.

The film includes an exploration of Nepal's attempts to protect its women from being exploited in India, primarily through the Foreign Employment Act, which imposed a ban on foreign employment for single Nepali women. However because of the conflict situation in Nepal and opportunities in the international labour market, many Nepali women migrated through illegal channels. These women remained undocumented in official records. Research has shown that migrant Nepali women contribute 8 per cent towards the country's national budget. In 2002, a modified FEA stated that women seeking foreign employment required a permission letter from their fathers or husbands. In 2008, the FEA of Nepal was again modified due to sustained activism by women's groups. It now allows women to seek foreign employment independently.

Technically, the film stands out because of its aesthetic music and lyrics, penned by the late Gautam Chatterjee. Two beautiful songs on the sound track lend themselves into the ambience of the film - its context and its visualisation. The imaginative background score and difficult editing are by Saikat Sekhareswar Roy. Sukanta Majumdar has done the sound design and Joydeep Bose has done the cinematography that is restrained and refrains from sensationalizing facts and incidents.