Despite abundant evidence that the PDS has failed to ward off starvation, the Centre proposes a new plan that shows none of the wisdom of this experience. Kanchi Kohli reports on an alternative grounded in local production, storage and distribution, which does a much better job of fighting hunger.
31 October 2005 -

The Food Corporation of India (FCI) was established under the Food Corporation Act 1964. One of its main functions is the distribution of food grains across the country through the official Public Distribution System (PDS). The corporation's website proudly (fciweb.nic.in) claims that the FCI is ensuring the food security of the nation. The FCI claims it has "played a significant role in India's success in transforming the crisis management oriented food security into a stable security system." But continuing reports of malnutrition and starvation challenge this claim - how can it be that in a 'stable [food] security system' so many people are going without food so often? It is now widely acknowledged that there are a significant number of households in the country that still go hungry every night. The quality and quantity of grain in the PDS reaching the poor are both questioned, and in many places the poor do not have the purchasing power to buy even the little offered to them in the PDS.

The PDS system in India is based on the wheat and rice model, which in many areas were never the staple grains for household consumption. It was millets and pulses which were core to dryland farming and consumption in the country. With the advent of the Green Revolution and the promotion of wheat and then rice, agriculture in India underwent a change. Everywhere in the FCI's godowns - and therefore naturally in the distribution system as well - wheat and rice stocks were the most common. This not only significantly changed the food habits of people across the country, but led to a complete neglect of so called coarse grains, like millets, which are otherwise extremely nutritious. This transformation may be acceptable if the PDS had been able to actually reduce hunger in the country as a result of its focus on wheat and rice-based security programs, but clearly that is not the case. 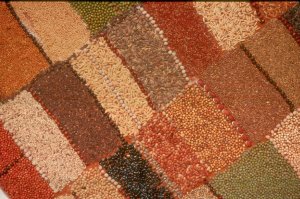 A collage of the seed diversity from Deccan Andhra. Photo credit: Ashish Kothari.

Disillusioned with the non-functioning PDS in the country, a group of dalit women farmers in Medak district came together with the help of a local NGO, Deccan Development Society, to experiment with an Alternative Public Distribution System (APDS). The dalit farmers in this region have historically been subject to lot of exploitation in the form of bonded labour, social boycotts, and so on. Most of these farmers own one or two acres of land that was given to them by the government as part of a land reforms programme, but they have never been able to cultivate it. Since there is very little employment in the region, these farmers have to migrate elsewhere and work as labour on farms and perform other odd jobs.

The mainstream PDS model never benefited these farmers. They decided, therefore, that any alternative would have to be significantly different, and based on different ideas about food security than those adopted by the PDS. Indeed, nearly every tenet of the APDS model is the opposite of the view taken by the PDS: reclamation of fallow land rather than increased productivity of existing cultivated lands, biodiverse agriculture instead of market-focused and government-driven planting, and emphasis on local roles rather than centralised administration of distribution. The work itself is carried out through women's collectives, and emphasises 'local' at every stage - production, storage and distribution.

In the APDS model, the first step is to work on the patches of degraded lands gifted the dalit farmers through efforts like bunding, trenching, top-soil addition etc. A seed loan is given to the farmers which they would need to repay in the form of grain. The next step is to cultivate this land with traditional and biodiverse agriculture using indigenous seeds. Once the crop is harvested the loan is repaid as grain, and stored in the community grain fund.

Food Security is achieved "when all people, at all times have physical and economic access to sufficient, safe and nutritious food to meet their dietary needs and food preferences for an active and healthy life" [1996 World Food Summit in Rome]

Food Sovereignty is " the right of peoples, communities, and countries to define their own agricultural, pastoral, labour, fishing, food and land policies which are ecologically, socially, economically and culturally appropriate to their unique circumstances. It includes the true right to food and to produce food, which means that all people have the right to safe, nutritious and culturally appropriate food and to food-producing resources and the ability to sustain themselves and their societies." [From: Food Sovereignty: A Right For All, Political Statement of the NGO/CSO Forum for Food Sovereignty. Rome, June 2002; http://www.grain.org/seedling/?id=329]

•  Genetic security in native baskets
•  Uncultivated foods and the poor

Now comes the turn of distribution. Through a Participatory Rural Appraisal (PRA) effort in the villages, the wealth profile of the village is ascertained. Wealth is ranked in terms of ownership of land, house, livestock etc. Each rank is granted a card of a different colour, which entitles the household to a certain quantity of grain. The poorest family gets the maximum grain. (For further details see: www.ddsindia.com)

Over the years, the work of the women sanghams in 77 villages has resulted in 5000 acres of fallows reclaimed, and two million kilograms of extra food produced every season. 5000 employment days have been created per village with 52 person days employment generated per acre. Alongside the extra fodder generated is worth 10,000 cattle and 1000 extra meals per family. Overall this implies increased fodder, increased livelihoods and increased wage income.

What such an initiative does, is not just help ensure food security, but moves a step ahead to attain food sovereignty. For farmers, food sovereignty is the right to determine what they sow on their farmers, what they harvest, distribute or sell and what they eat. According to P.V. Satheesh, "the difference between food sovereignty and food security is the same difference that is between self produced food and purchased food. Food Sovereignty is critical because it ensures cheap food for the poor, and nutritious food for the rich. Government policies have induced rice in the food habits and fields of the same dryland communities who had produced and eaten superior foods such as millets, sorghum etc."

While the women sanghams continue their effort toward ascertaining food sovereignty in their villages and also convince neighbouring villages for the same, the Government of India remains far removed from this basic logic. The Centre has sent a circular (dated 22nd September 2005) to all state governments towards initiating a new scheme for the establishment of new Village Grain Banks all across the country. This is as per the mandate of the Common Minimum Programme of the present government. It is a Centrally sponsored scheme; the expenditure on the major portion of the scheme will be borne by the Central Government, and it will be the joint responsibility of the central and state governments to implement it. The total cost of each grain bank would be Rs.60,000. Rs.90 per quintal shall be allocated towards the transportation costs of moving grains to villages from the closest depots of the Food Corporation of India (FCI). So it is the grain in the FCI depots which will be used for the setting up of the grain banks.

On 17th and 18th October, 2005 at a National Consultation on Food Security Corridor in Hyderabad, this scheme was under the scanner. One session of the meeting was dedicated to this where, Bhanwar Lal, Secretary to the Government of AP, Consumer Affairs, Food and Civil Supplies, received direct feedback from the participants of the workshop. He assured the participants that this scheme should only be seen as a temporary measure to address the issue of hunger, and not a long term strategy to address food security. He also stressed that there would not be any restriction to even millets and pulses being provided to the grain banks, as in Andhra Pradesh a policy level decision has been taken to include these grains in the mainstream PDS.

There were several responses. The crux of these was that although establishing village grain banks is a critically needed task, this model of external dependencies will not work. The GoI proposal is far removed from the concepts of local production, local storage and local distribution. Even if the government ensures that the grains provided will also include millets and pulses, it will still not be sustainable.

And there is evidence to support this skepticism. Rajiv Khedkar working with the Academy of Development Science (ADS) in Raigad and Thane districts of Maharashtra, pointed out that "in Maharashtra, a village grain bank scheme of the similar nature that is being proposed now was initiated in 1996 and on which crores of rupees were spent. A study by ADS in the last year has shown that 95% of these grain banks are not functioning. The primary reason: the scheme lacks people's ownership, management and control. Food is not grown locally and not stored according to people's own customs and traditional practices. Paddy which is 5-6 years old is distributed to villagers from the FCI godowns."

In addressing the issues in agriculture and hunger in the country, the Centre's planners do not draw from umpteen examples of biodiverse farming, community grain banks, community seed banks, etc. around the country - in Maharashtra, Uttaranchal, Andhra Pradesh, Chhatisgarh and other states. These initiatives have repeatedly proven the need for strong links between local production, storage, and distribution. They emphasize food sovereignty, not trade; the PDS has already spent decades oblivious to this important distinction, and millions of families have paid an enormous price for this myopia.