A new volume that outlines in detail the climate change issues, impact and adaptation strategies in Sikkim could also provide replicable models for other states, particularly in the Himalayan region. Seema Bhatt reviews the publication.

In 2007, an international organization, the Institute for Social and Environmental Transition (ISET) carried out a strategic gap analysis to identify areas in which targeted research and capacity building could support adaptation to climate change across the Asian region. This research was undertaken for the Canada-supported International Development Research Centre (IDRC) and United Kingdom’s Department for International Development (DFID).

One of the key issues identified was the need for information sharing and integration across sectors. Another was the need for more research on the implications of climate change for food and water security as well as the social context underlying adaptation, with links to poverty.

Also highlighted was the need for standard methods and criteria for assessing adaptation approaches and to combine traditional systems and ‘modern’ scientific research for implementation. Finally, what was emphasized was the need to document adaptation strategies by local communities. Given this, it is indeed heartening to see that within five years of this research, a publication has been compiled that addresses many of these gaps.

Climate Change in Sikkim: Patterns, Impacts and Initiatives (2012),edited by retired IFS officer M L Arrawatia and Sandip Tambe, Special Secretary, Rural Management and Development in the Government of Sikkimshowcases through research papers many of the above issues and concerns, particularly in the Himalayan context. This is indeed the first comprehensive compilation of climate change impact and adaptation strategies for a specific state in India.

The vulnerability of the Himalayan region to impacts of climate change was brought to the fore by the disaster in Uttarakhand in June 2013. Disasters such as these make us question, “Are we ready to combat future natural calamities”? Clearly each state needs to understand through research and data what is happening. This information along with local community knowledge needs to then translate into policy and finally action. This publication is a step forward towards this readiness.

Sikkim is representative of the fragile mountain system.  As a result of climate change there has been an increase in the intensity and frequency of natural calamities, impacting both ecosystem services as well as livelihoods. The impacts are beginning to cut across human socio-economic systems that will affect virtually all aspects of life. The publication presents many of these issues in great detail. 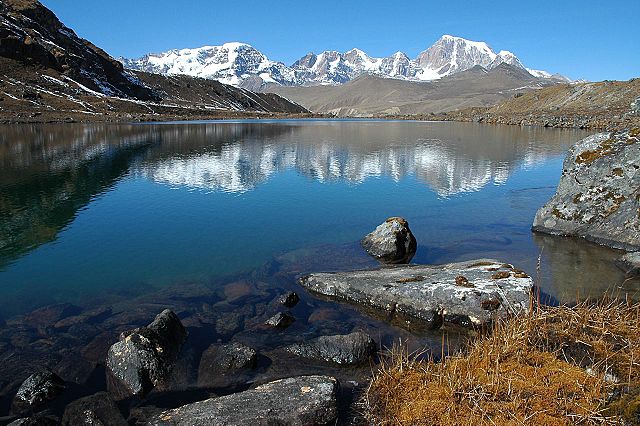 The publication is a compilation of 23 papers focused on climate change issues in the Sikkim Himalayas, divided into various sections. The first section has papers that look at the current data on variations in temperature, precipitation, snow cover and glacier volume. The second section focuses on documenting local community experiences, traditional ecological knowledge and observations of the local community from day to day existence.

There is, for example, an extremely interesting account of ecosystem services provided by traditional agri-ecosystems. Farmers have developed innovative coping mechanisms against the emergence of diseases, pests, invasive species and changes in rainfall patterns. The papers in this section validate the importance of traditional ecological knowledge and its contribution to future research on climate change.

The role of traditional institutions in coping with climate change cannot be described better. One paper looks closely at the Dzumsa of Lachen Valley, a local traditional political institution that is still active in North Sikkim. This institution is traditionally responsible for the management of natural resources and determines how these resources should be used. The Dzumsa has assumed an even more important role in the wake of changing patterns as a result of climate change.

It is examples such as these that illustrate the role traditional knowledge can play in helping local communities adapt to climate change, and can help develop appropriate adaptive strategies across the state.

The third section addresses impacts of climate change on various sectors that include water, biodiversity, agriculture and livestock. The publication is significant because it gives concrete examples relating to climate change impacts as well as tangible evidence of impacts on specific species of birds, herpetofauna and butterflies.

This is much needed and timely since this aspect has remained fairly ambiguous for the past many years. The impacts discussed here are based on a range of methods that include modeling from remote sensing data and first hand experiences and observations.

An interesting section deals with vulnerability assessments, and documents methodologies and processes for measuring the same. The case study from south Sikkim that discusses how vulnerability can be reduced by building resilience is a case in point. This is followed by discussion on existing strategies used to address the impacts of climate change. The final section suggests a state-specific framework for climate change adaptation and mitigation.

Sikkim is a model state in more ways than one, and a lot of groundwork has already been laid out in the state towards addressing climate change issues. The Sikkim State Council of Climate Change has been set up to ensure appropriate policy interventions. A nodal department for climate change has also been established. A Glacier and Climate Change Commission has been constituted and this works with several other relevant institutions for in-depth studies on climate change.

The mandated State Action Plan on Climate Change has also been prepared after several multi-sectoral consultations. Sikkim is also the first state to carry out micro-level climate change related vulnerability assessments of rural communities. The publication highlights efforts in the state to link existing initiatives to mitigation and adaptation to climate change.

For example, the state policy of banning green forests for commercial purposes will make a significant positive contribution in combating climate change. The decade old (2000-2010) ban on grazing within the protected areas of the state is yet another landmark move towards better protection against climate change.

More such compilations as this are required. But more important perhaps is that this information eventually leads to the action required. This publication takes us through the entire cycle of research, data-gathering, recording of local community perceptions and actions, proposed and ongoing action by the government, and finally a proposed consolidated strategy.

The compilation also reveals gaps in research and action. It is hoped that the findings from this would feed into the state action plan on climate change. This is indeed a model that other states need to follow.

The papers in this publication, however, are focused primarily on wild and domesticated biodiversity and impact of climate change on rural lives and livelihoods. There is now also an increasing need for focus on the implications of climate change in urban areas, an aspect that has not been covered in the book.

Migration is a critical adaptation strategy that many rural communities are going to adopt as the impacts of climate change exacerbate. Migrants will head towards urban areas and thus, adequate planning in these areas will become crucial. Cities themselves will feel the impacts of climate change as a result of increasing temperature, water variability etc. Particular focus will be needed on hygiene, sanitation, water management and health issues.

These aspects of the urban challenge in the face of climate change may be considered for future research and publication. A chapter focusing on the impact of climate change in Gangtok and mitigative/adaptive measures to combat the same would have added value to the publication from that angle.

The book is nevertheless a commendable effort. Serious and solid content is enhanced by top quality photographs. However, a word about the size. This is more than a coffee table book and has to be viewed with that seriousness. The sheer size and weight of this volume makes it fairly unwieldy and difficult to read. It may have been worthwhile for the different sections to be printed separately and then presented as a set rather than as one heavy volume.

Various policy briefs could also be compiled from existing material for wider access to this valuable information. It is hoped that this pioneering effort will be followed by others as the volume of work on various aspects of climate change continues to grow.

Seema Bhatt is an independent consultant working on issues of biodiversity, climate change and ecotourism in the Asian region.