"In the Varadaraja Swamy Temple in Kanchipuram, I saw with my own eyes, just a year ago, how the late 17th-century murals were literally disintegrating. As you watch, they are going. It has happened in temple after temple". David Shulman talks to Lalitha Sridhar .

Professor David Shulman is one of the worlds foremost authorities on the languages of India. His first visit to southern India was in 1975, for field work, after a doctoral programme in Tamil and Sanskrit at the School of Oriental and African Studies, University of London. His research embraces many fields, including the history of religion in South India, Indian poetics, Tamil Islam, Dravidian linguistics, and Carnatic music.

Currently the Renee Lang Professor of Humanistic Studies at the Hebrew University in Jerusalem, he is also a published poet in Hebrew, a literary critic, a cultural anthropologist, and a peace activist.

David Shulman is one of the world's foremost authorities on the languages of India. He is currently Renee Lang Professor of Humanistic Studies at the Hebrew University in Jerusalem. He is also a published poet in Hebrew, a literary critic, a cultural anthropologist, and a peace activist (Pic courtesy: David Shulman). 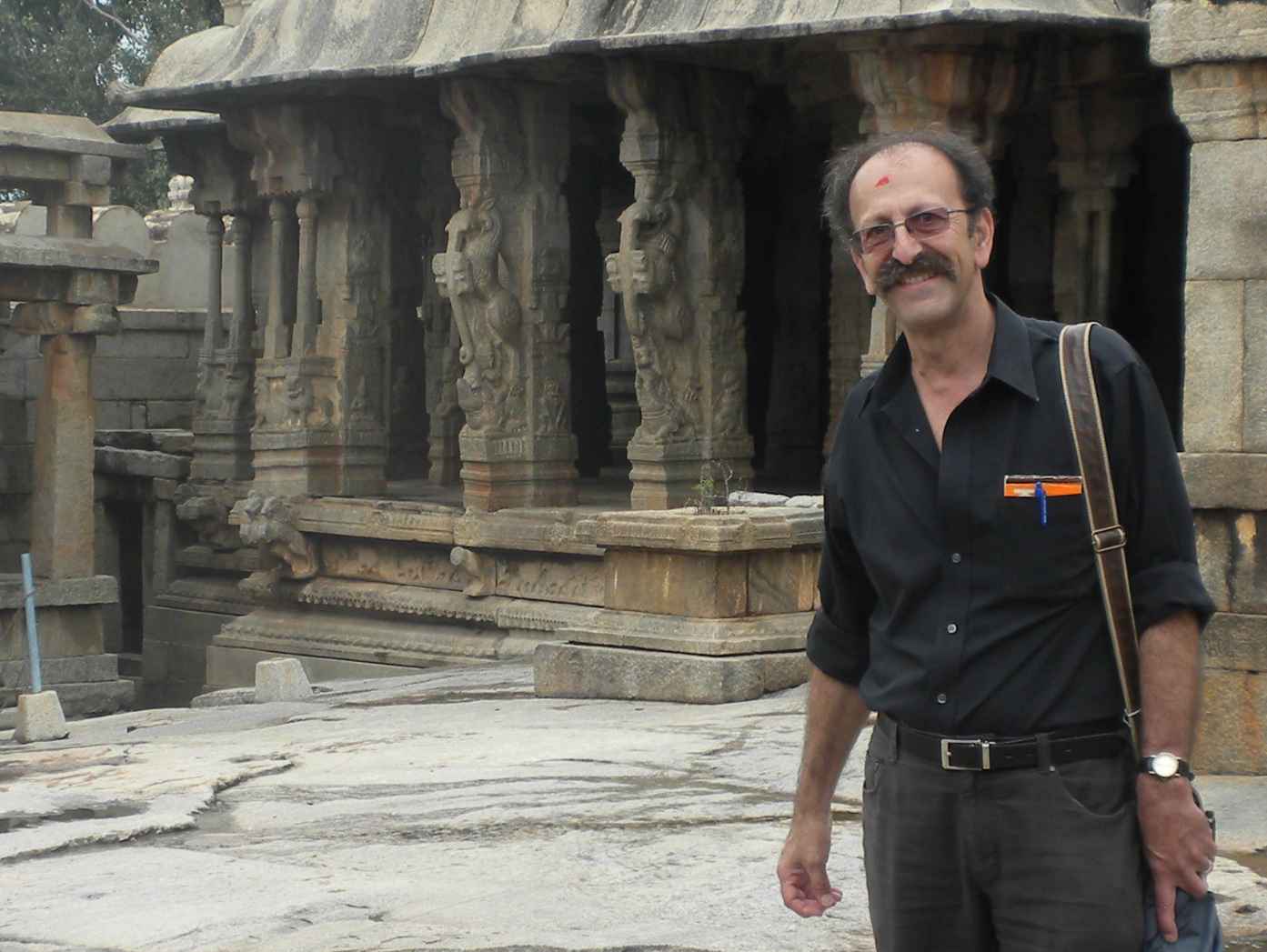 At 62, Professor Shulman retains his ability to travel great distances and works with unflagging enthusiasm on his many ongoing projects. He is soft-spoken, down-to-earth and diffident, possesses a terrific sense of humour and is blessed with a sweet temperament, a lively curiosity and a continuing sense of wonderment, besides a total commitment to doing what he can to conserve and restore the cultural treasures of southern India, a land so far away from his home in Jerusalem.

Lalitha Sridhar caught up with his recently. Excerpts from an interview that only just manages to touch upon the many facets of this exceedingly good man.

Lalitha Sridhar: What are the challenges in restoring and documenting India's temple heritage?

David Shulman: Lets first get a sense of the dimensions of the problem or the challenge. In the Tamil country alone, there must be five or six hundred ancient temples. Every single one of them is a monumental world of its own, with its own immense wealth of artistic, iconographic, literary and musical resources that are connected specifically to the temple.

We have a good example in Tiruvarur [the temple to Thyagarajaswamy in the Tiruvarur district of the Thanjavur Delta] where, after years of fruitlessly trying to get the responsible authorities to take care of the 17th-century paintings on the ceiling of the Devasiriyan Mandapam, the task is finally achieved. Only recently have these paintings been professionally conserved, and immense effort had to go into that, and we are talking only about one little mandapam and one set of paintings, which were cleaned and treated professionally by the INTACH (Indian National Trust For Art and Cultural Heritage) people. That gives us an idea of the kind of challenges we face.

There are dozens of temple sites all over the Tamil country with 17th, 18th and 19th century paintings. Many of the great treasures have been lost because of white-washing and neglect, or they have faded away in the face of poor preservation. To save these paintings would require a sustained, integrated, state-level, possibly central government-level effort. And thats just the Tamil country. If you go to Andhra Pradesh, the situation is very similar. There are dozens of ancient temples. Most of them are not in very good shape. Paintings and sculptures are again being lost.

You asked about temples, now think about the living traditions of performance. I can give you an example: Im interested in this great 16th-century Telugu text called Vasu-chatritramu, by Bhattu-murti, one of the masterpieces of Indian literature, which has some thousand verses or so in it. We know for a fact that three generations ago, there were still people who knew the performance tradition of this text, that is, they knew every single one of its thousand verses, and they knew which raga the verse was meant to be sung in-- because it is a highly musical text and the ragas are critical for its meaning. We know the name of the last person who knew the tradition, and he has died. So thats it, its gone.

If you multiply that by the thousands of texts that have such traditions but have been lost, we see how fragile the whole situation is and how few people are left in any of the Indian regions who can actually still represent the classical traditions as they were meant to be transmitted. That gives an idea of how it all hangs by a thread.

I work in southern India, in Andhra Pradesh, in Tamil Nadu and to some extent in Kerala. Thats my own area of interest, but you would be able to say very similar things about all kinds of other places as well -- in the north, in Gujarat, in Assam or in West Bengal.

Actually, wherever you go in India, you have these kinds of problems. Its a question of attention, in a way. The resources exist. Theres no question about that. There are plenty of resources to do whatever needs to be done in all of these places. The question is whether there is some kind of collective will to do it. That requires attention and the mobilisation of interests and resources. As it is, treasures are being lost literally every week. Given this state of affairs, there are people who are doing marvellous work.

The INTACH people, for example, are among those committed to doing whatever they can. They are struggling really, in often difficult conditions, to preserve what can be preserved.

LS: Please give a few examples of the things that have been lost.

DS: I've mentioned the mural paintings in temples all over Tamil Nadu. At Viruttachalam, there is a lovely set of murals that is endangered. In the Varadaraja Swamy Temple in Kanchipuram, I saw with my own eyes, just a year ago, how the late 17th-century murals were literally disintegrating. As you watch, they are going. It has happened in temple after temple: the walls are white-washed and re-painted. For example, in the Meenakshi Temple of Madurai, priceless paintings have been lost like this. There are people who are working to document and conserve, but theres a very real and ever present danger that some treasures will be lost.

LS: What have you been doing so far? Has there been a process of evolution in your own work, as you became more and more involved? And what would you like to do further?

DS: I, like others before me, was very much concerned with what was happening in Tiruvarur, but I was unable to produce any actual change on the ground. When I first saw the paintings in 1976, whole panels were intact that have disappeared today because of water damage, fungus, bird nestings and so on. So I was very keen that we should document these paintings. At least then, there would be some way to remember the way the paintings were.

There is a very, very fine photographer in Madras, V K Rajamani. He came down to Tiruvarur and we went through a lot of bureaucratic hassles, but he did document the panels through his fine photographs. They will be published by the Prakriti Foundation in a book early next year. But thats only one example. Books like that, with high quality photographs, are needed for several hundred temples in South India. There are many other really beautiful paintings that are not quite as old, which date to the 19th century, for example in Vedaranyam, which also need conservation. So there is a great deal to be done.

LS: How would you distinguish between the Western approaches to conservation as opposed to the Indian one?

DS: There is a policy that has been formulated for conservation in India but the question is whether it has been put into effect. There is a lot of neglect. If you travel as a tourist in Italy or southern France or Crete, indeed most of the western European countries, national treasures along the countryside are beautifully kept for the most part. The great paintings are protected against the ravages of time. Its considered the most obvious to do.

Thats what people should do - they should be conserving their heritage. In Italy, the Renaissance masterpieces are beautifully preserved. Its very central to the cultural heritage of human beings, wherever they are. You dont have to be Italian to believe that these paintings should be properly cared for. You dont have to be Indian to believe that the ceiling paintings in Tiruvarur should be taken care of. It simply has to be done.

Lalitha Sridhar is a Chennai-based journalist.

TIGER SANCTUARY : Are tigers back at the Buxa reserve?
MORE ARTICLES
on similar topics ...
CULTURE