The spirits of Mumbai's cars

Whether the Bandra-Worli sealink will reduce the travel time across the city remains to be seen. But it isn't doing anything to dampen the growing dependence of our cities on private transport, writes Darryl D'Monte.
05 July 2009 -

The first time that someone referred to the spirit of Mumbai, if memory serves correctly, was when Sharad Pawar triumphantly announced that the Bombay Stock Exchange would open a day or two after the series of bomb blasts in March 1993 in the wake of the Babri Masjid demolition. It did. The second time was when the city rallied around after another traumatic episode, the terrorist attack in November last year.

It has surfaced for the third time, albeit not with so much fanfare, on 30 June, the day the Bandra-Worli Sea Link was opened by the Congress Party, which has quickly christened it the Rajiv Gandhi Setu, much to the discomfiture of the Shiv Sena and BJP. Motorists tried to whiz along this addition to the city's skyline - the cable-stayed bridge is lit up every night and on June 29 and 30, there were brilliant laser displays as well - and were ecstatic that "the spirit of Mumbai" had conquered the city's transport bottlenecks with an engineering marvel which could rival those in China.

However, they forgot the cardinal rule of all such highly capital- and resource-intensive road projects, which only benefit private motorists: they are their own worst enemy because, like Parkinson's Law, traffic expands to fill the space available for it. Because the Sea Link is new - and perhaps, even more so, because its use (Rs.50 each way) is free for the first four days - everyone rushed to savour its charms and traffic ground to a halt, not only through the entire length of the bridge but elsewhere in the city.

After this display of uninhibited ecstasy by motorists, one can't help wondering whether petrol and diesel are the real spirits of Mumbai (and every other metro in the country)! Nothing seems to give well-off citizens greater zing than careering about the city, the bigger the car, the better. Ads equate such indulgence with style, class and, increasingly, there is a heavy dose of sexual innuendo to boot. 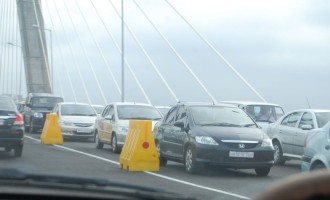 According to the World Bank, only 5 per cent of Mumbai's commuters use cars, yet the city has spent over Rs.3000 crores on new infrastructure that is primarily for these vehicles. (Picture by Rinka Bose)

•  Driving away cars
•  Think outside the barrel

Yet, with the climate crisis reaching a tipping point, beyond which the planet can't be saved, there is little realization here that the car is the problem, not the solution, to mobility in our cities. Everywhere in the developed world, planners are finding ways and means of restricting cars from entering the central business district, while Mumbai and other cities are doing precisely the opposite and paving the way for higher, energy-intensive and polluting transport.

For all the exultation over this being Mumbai's second and newest icon, after the much-lauded Gateway of India, which may be denigrated as a vestige of the colonial Raj, one should not be carried away by hype on this score. Yes, it is a feather in the cap for Indian construction companies and is spectacular to behold. So accustomed are Mumbaikars, and harassed motorists in other parts of the country, to seeing nothing else but the bumpers of other cars and building after building as one battles traffic ever day, that it is a pleasure to traverse what ought to be an obstacle-free ride across a bay and also breathe some fresh air.

If it cuts the distance for commuters to the central business district by 45 minutes, as the Maharashtra State Road Development Corporation, the promoters, promised, that is at least good news for the privileged band of motorists. However, on the first day, it took longer on the link than it did for commuters on the old road, which is ironical, to say the least. There is the additional hurdle that it is only the first leg of the whole 20-km or so Bandra to Nariman Point link, and there is no telling when the two or more other legs will be started, let alone completed. While everyone may rush, lemming-like, to speed southwards to Worli, he or she will be caught up in the mother of all traffic jams there, so the overall time taken to commute will remain the same, even if the first leg is in a more salubrious environment.

According to the World Bank, only 5 per cent of Mumbai's commuters use cars, yet the city has spent Rs.1600 crores on the Bandra-Worli link, Rs.1500 crores on some 50-plus fly-overs, and will shell out many more crores on the other legs of the sea or overground links to Nariman Point. The MSRDC is also at a very advanced stage in commissioning the Transharbour Sea Link on the east coast of the island city, from Sewri in mid-town Mumbai to Nhava Sheva on the mainland across the harbour, for Rs.4000 crores. Not to be outdone, the Municipal Corporation is embarking on a reckless spree to construct pedestrian skywalks, many along arteries which don't need them, which appears a thinly-disguised attempt to line some officials' pockets.

Also according to the World Bank, as many as 55 per cent of the trips made every day by Mumbaikars as a whole - as distinct from commuters who have regular jobs - is by foot and 0.8 per cent by cycle. The bias against passengers who use buses exists in every city, not to mention the total disdain for cyclists and pedestrians. As many as 40 per cent of Delhi's residents cycle or walk to work. An estimated 60 per cent of the motorized commuting trips are made by mass transit in the capital, mostly by bus. But buses represent less than 1 per cent of all its motorized vehicles. Car and two-wheelers represent 90 per cent of vehicles. The capital has more cars - 1.5 million - than the three other metros put together, amounting to 17 per cent of the country's total.

The transport network in Delhi is predominantly road-based, with 1284 km of road per 100 sq km. The number of all vehicles (four-, three- and two-wheelers) on Delhi's roads has increased by 212 per cent in the last 18 years, from 19.23 lakhs in 1991 to over 60 lakhs by 2008. Roads occupy 21 per cent of the total space available in Delhi, which must compare favourably with central London, and there is little scope for building more. The total length has increased from 22,487 km in 1991 to 31,183 km in 2008, a modest increase of 17 per cent in the same period. To accommodate the burgeoning vehicle population, additional space is increasingly sought to be created either over or beneath the road, i.e. flyovers and underpasses.

Los Angeles, held up as the epitome of everything that has gone with city planning, is introducing a comprehensive bus system and pulling down its clover-leaf junctions after they have attained a certain age.

•  Driving away cars
•  Think outside the barrel

This attempt to increase the space for cars, which cater to the minority of users is retrograde. As the Mayor of Munich, Hans Joachim Vogel, observed nearly 40 years ago, "Each million we invest into urban motorways is an investment to destroy the city." Indeed, Los Angeles, held up as the epitome of everything that has gone with city planning, is introducing a comprehensive bus system and pulling down its clover-leaf junctions after they have attained a certain age.

The solution lies in restricting the use of cars, by devoting all resources to public transport, penalizing motorists by higher parking fees (Mumbai and other cities here have the lowest in the world, at Rs.5 per hour and not telescopically increasing with each passing hour), and other traffic restraint schemes, which the Mumbai police is considering. Delhi's Bus Rapid Transit System - the only full-fledged one is on the first 5.8-km-long route - has aroused the ire of the motorist lobby but it deserves to be given a proper lease of life, and not vilified by the media as it has been. It has a reserved lane for buses in the middle of the road, which has enraged motorists.

The exact parallel, for all those who keep demanding more space for car-owners, is to point out that for anyone who is obese, the solution is not to keep ordering larger and larger trousers, but to reduce weight.

BACK TO SCHOOL : Meaningful restart of education is critical
MORE ARTICLES
on similar topics ...
CITIES