Growing without a plan

Rajnandgaon's location along a national highway has helped it to grow. It is also not cash-strapped. But its problem is the absence of good governance, writes Kalpana Sharma.
08 December 2009 -

The road to Rajnandgaon from Raipur, the capital of Chhatisgarh, is a broad dual carriageway, part of the national highway that leads to Nagpur and ultimately to Mumbai. It passes the planned township of Bhilai, where one of the earliest public sector steel mills was built with Russian collaboration and inaugurated by India's first Prime Minister, Jawaharlal Nehru. Even today, Bhilai stands out in stark contrast to the surrounding countryside with its orderly tree-lined avenues, its housing colonies for different categories of employees, its modest but organised shopping area and its schools and hospital.

Bhilai is an aberration in the landscape of small towns in Chhatisgarh, and indeed in India. For on either side of the highway that passes Bhilai, you encounter familiar chaos, villages verging on becoming towns and not quite able to deal with the transition.

Rajnandgaon was once part of the Central Provinces and Berar and on the Nagpur Bengal Railway line that was so central to the development of cotton mills in the region. The once flourishing Bengal Nagpur Cotton Mill is now all but a ruin. The mill's history tells the story of a town that once prospered but now exhibits wasted potential.

Originally called CP Mills and owned by the McBeth Brothers, one of its later owners was Pandit Jagannath Shukla, the father of the veteran Congressman and freedom fighter Ravishankar Shukla. Over time the mill changed hands further. Shaw Wallace bought it and then, as it went into debt like other textile mills, it was taken over by the National Textile Corporation until it went into liquidation in 2008. But local people can remember it as being the symbol of industry in the region and a place where many local people found work. There are still a few smaller industries around Rajnandgaon but nothing of the size or importance that the Bengal Nagpur Cotton Mill must have had in its time.

The town itself looks non-descript. The area around the railway station and the market is typically crowded. The part of town where the bureaucrats live is more orderly, with the picturesque Rani Sagar Lake in the vicinity. This division dating back to colonial times is evident in many small towns.

The town is also known for its educational institutions such as the Chhatisgarh Institute of Technology and the Sanskar City International School, the first such school in Central India. The famous Delhi Public School also has a branch in the town and more schools and colleges, with spanking new buildings, are coming up along the highway that passes through the town.

As urbanisation in Chhatisgarh state is under 25 per cent, cities and towns have been categorized differently. So a town with a population of over one lakh has a Nagar Nigam, or Municipal Corporation, where there is a directly elected Mayor. A town of between 20,000 to one lakh has a Nagar Palika Parishad or Municipal Council and a town with between 5000 to 20,000 population has a Nagar Panchayat. To qualify as urban, settlements must have a population density of at least 500 persons/sq km. Recently, 35 large villages were made into Nagar Panchayats.

Rajnandgaon, with a population of 143,727 (2001 census) has a Nagar Nigam or a Municipal Corporation with a directly elected Mayor. For the first time a woman, Shobha Soni, has been elected to this post.

As with other towns this size, Rajnandgaon has a substantial population of urban poor living in 23 notified slums. The levels of poverty in these slum areas is linked with the general poor conditions in the district, one where the population consists of Dalits, tribals and backward castes. Women's literacy is well below the national average and many Dalits, including those living in towns like Rajnandgaon, depend on beedi work for their daily earnings. In the Shanti Nagar slum, the women say they can make 500 beedis in a day at most while the rate of payments is Rs.46 for 1000 beedis.

Despite such poverty, it is striking to see how clean are places like Shanti Nagar. The drains are not over-flowing; you don't get the vile smells you normally associate with slums. This is the result of the active involvement of the women, some of whom have formed self-help groups and with their savings and a bank loan, run the local ration shop. One of the moving spirits behind it is Burhan Bai, a beedi worker. She says, "The women also take responsibility for cleanliness in the locality. If it's not clean or there's no water, we call the councilor. He's given us his number." 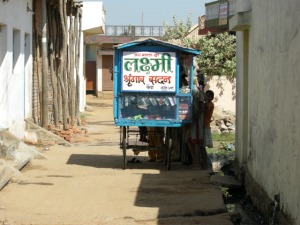 Despite the poverty, it is striking to see how clean even the slum areas in town are.

Although Burhan Bai earns very little as a beedi worker, her son, Vinod spent many years working in Mumbai where he sold chappals with his older brother. When the latter was killed in an accident, Vinod decided to return to Rajnandgaon to look after his mother and his brother's widow. But in the years that the two brothers lived and worked in Mumbai, they managed to accumulate enough surplus to build a pucca house in Rajnandgaon. He says that if he had stayed behind in the town, he would never have managed to do this.

Another so-called slum area lies on the other side of the railway tracks. The councilor here is Dr.Rekha Meshram, a medical doctor who has her clinic and office in her house in the slum colony. The wall outside announces that she lives in the house. A Buddha sthal next to it identifies it as a colony of Mahars (Dalits).

Dr.Meshram is well aware of the problems. One that is immediate is the level of the road outside her house. Like many other small towns, Rajnandgaon also has its share of narrow concrete roads built with funds especially assigned to this task. Yet, the new road is built without leveling the old road. As a result, the road rises several feet above the ground floor of the houses on either side. The house next to Dr. Meshram's is now a good three feet below the level of the road, making it vulnerable to flooding during the rains, especially as there are no storm water drains to carry off the excess run off.

This is Dr.Meshram's second term as councilor. She says she has understood her rights and duties because she is educated. When she was elected the first time, only five or six councilors out of 15 were educated. Today there are seven or eight. She considers this as an encouraging trend. "I understand why educated people don't want to enter. We need to be patient, to be articulate. Being educated is the biggest handicap in politics. You can't get ahead on your own talent. Till you have a godfather, you can't go all out. Women get caught, entangled in this web. Party politics is very difficult for women members."

Despite this note of pessimism, Dr.Meshram is clear on the work that needs to be done. She speaks with knowledge and authority on problems like water and sanitation. For instance, a hundred years ago, the anicut on the Sheonath River provided adequate water to the town. Now with four times the population and a reduction in the storage capacity of the reservoir due to siltation, there is acute shortage.

Rajnandgaon used to have many lakes and ponds all around it. It still has several lakes. Yet the water problem seems to be one of management. Dr.Meshram and others complained that even before the water piped in from the Sheonath anicut could reach the town people with farms en route stole it, thereby cutting the supply by half.

According to Dr.Meshram, the State Government has given an order that mohalla samitis should be formed in every ward. The elected councilor is expected to nominate five, seven or ten people who can then forward schemes to the District Planning Committee (DPC). But the DPC is not functioning. Therefore, the schemes never get approved, she says.

Dr. Meshram presents an interesting contrast not only from other elected women councilors but also from her male colleagues. Being a professional, she is not so interested in using her position and power for herself. She also seems to have a better grasp of municipal laws and functions, including finance, as compared to others. But her comment about women and the problems they face getting ahead - their need to get a 'godfather' - reveals another dimension of what all women have to overcome when they enter elected office, including women who are highly educated.

Interestingly, she also had a different take on the question of whether the Mayor, or chairman of the municipal body should be directly elected or selected by the councilors. In Rajnandgaon, as elsewhere in Chhatisgarh, the head of a municipal corporation is directly elected. "This is a big problem," says Dr.Meshram. "They (the Mayor and the Executive Officer) can do what they like and overrule local councilors. Because of this corruption has increased." She complains that this problem becomes acute during the time when the budget is formulated and presented. " Usually councilors don't get any time for discussion. The budget is formulated by the Executive Officer and the elected representatives have no part in it", she says.

Rajnandgaon is a town that is poised for growth. Its location along a national highway has helped it to grow. It is not as cash strapped as other towns its size. Its problem, as in many other similar towns, is the absence of good governance. The structures of governance exist, but they are either not functioning - as is evident in the absence of a District Planning Committee - or are distorted by a few individuals who undercut ostensibly democratic institutions. As a result, the town grows but without a plan or a vision.