The tiny creature that has made the Assam zoo famous!

On 15 November, the Assam State Zoo opened its doors to three pygmy hogs, becoming the only zoo in the world to house this critically endangered species. Ratna Bharali Talukdar reports on an ongoing project that’s trying to save the animal and its habitats in the face of all odds.

It was widely believed to be one of the ‘extinct’ species of the planet until, fortunately, a small population of pygmy hogs – the smallest and rarest pig of the wild – was sighted in the wilderness of Manas National Park (MNP) and Barnadi Reserve Forest in lower Assam in the early seventies**. By the mid-nineties, however, the animal could be found only in MNP and nowhere else in the world.

It took a while before a full-fledged plan of action could be initiated to save and protect pygmy hogs in a captive breeding centre that started in 1995 in Basistha area of Guwahati. The survival saga of the unique pygmy hog (Porcula salvania), which began thus, presents a grand success story to celebrate.

The pygmy hog is one of the most vulnerable mammals in the world, only 25 inches in length, 10 inches in height and 8-9 kilogram in weight. It also presents a crucial indicator for the survival of a number of endangered species including the one-horned rhinoceros (Rhinoceros unicornis), tiger (Panthera tigris), eastern barasingha (Rucervus duvaucelii ranjitsinhi), water buffalo (Bubalus arnee), hispid hare (Caprolagus hispidus) and Bengal florican (Houbaropsis bengalensis).

A total population of 85 in different groups of this unique species has been released in original habitats at different times during the period since its sighting.  On 15 November this year, three pygmy hogs were given to the Assam State Zoo for display to its visitors, thus making it the only zoo in the world that can boast of this unique mammal species. Zoo authorities have also expressed hope that there will be another captive breeding centre inside the zoo, provided everything goes as planned.

This journey, though a successful one, however, has not been painless, at least for Dr Goutam Narayan, the Director of the Pygmy Hog Conservation Programme (PHCP), who has devoted a good part of his life to the conservation, protection and survival of this unique species in both captive breeding centres and in its natural habitat. 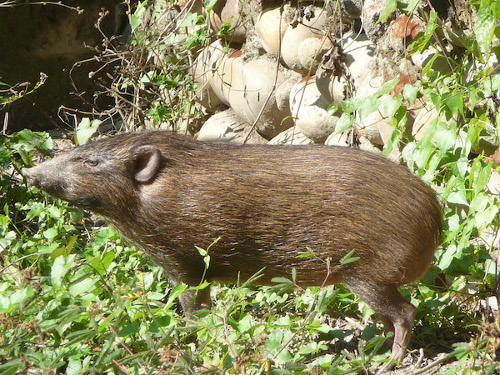 A female pygmy hog near its nest. Pic: Goutam Narayan

Narayan recollects that he came to know about this highly sensitive and elusive mammal species for the first time, while he was on a field trip, working on the Bengal Florican (locally known as Ulu Moira) during the late 1980s, when he served in the Bombay Natural History Society. Incidentally, the habitats of Ulu Moira are the same as that of the pygmy hog and hispid-hare.

Narayan also came to know that this unique species had been reduced to a miniscule population and was extremely vulnerable. Although it was once abundant throughout the entire stretch of the southern Himalayan foothills, covering a huge area of UP, Nepal, West Bengal and Assam, only a few remaining had been sighted in the Barnadi Reserve Forest and MNP. Not a single member of the species existed either in private possession, or in any captive breeding centre.

This made him think deeply about doing something to aid the survival of the pygmy hog. Narayan had already undergone rigorous training on captive breeding in New Jersey Island of the United Kingdom. In 1995, he got an opportunity to work with William Oliver, under the Durrell Wildlife Conservation Trust’s Pygmy Hog Conservation Programme (PHCP). Since then, there has been no looking back, he says.

The objectives of the captive breeding initiative were conservation breeding of the species with the aim to re-introduce them in selected areas from where they had disappeared; upgrading and protection of these original habitation sites; carrying out extensive field research for future management practices, and most importantly monitoring the re-introduced populations, while monitoring and modifying management practices.

Captive breeding started with two male and four pregnant female pygmy hogs captured from MNP in 1996. The population increased to 35 in 1997, and subsequently rose to 77 in 2001. This marked a 13-fold increase within a period of six years!

Re-introduction in natural habitats started in 2008 with the release of 12 pygmy hogs in Sonai-Rupai Wildlife sanctuary. But a pre-release enclosure or provision of a second site became necessary, as till then the captive population of the pygmy hogs at Basistha had been the only home of the entire global population of captive pygmy hogs.

The pre-release centre was set up at Potasali in Nameri Tiger Reserve where a holding enclosure and three large pre-release enclosures were constructed to make the animals familiar with the natural habitat. A behavioural study, too, proved that the captive-bred hogs started behaving like wild animals within a month and had learnt how to survive in the wild.

After about five months in the pre-release enclosures in a semi-wild environment, the hogs were taken to the re-introduction site where they were kept in a smaller enclosure for 2-3 days before being allowed to escape to the wild.

A long way to go

The recent induction of the species in Assam State Zoo was made after the animal keepers in the zoo were trained on animal management protocol of captive.

The pygmy hog is rarely sighted in the wild because of its elusive character, and one can mostly sense its presence through the nests and droppings, points out Narayan. The tall grass, in which it survives, makes it difficult for the tiny creature to be spotted easily in a wild environment.  The State Zoo would, therefore, definitely provide an interesting opportunity for visitors to see this rare wild pig species.

The PHCP authorities are now also considering releasing the pygmy hog in the Barnadi Reserve Forest in the days to come. Efforts have been initiated for restoration of grasslands in these areas through improved management and protection.

“The released hogs are being monitored with encouraging results – young hoglets born in the wild have been recorded every year after release. Radio telemetry studies have revealed that the released hogs are also dispersing to occupy grassland areas up to 3 km from the release locations. Suitable grassland habitats in the former range of the species are also being assessed to identify more release sites” adds a contented Narayan.

Three more (one male, two female) pygmy hogs were captured from the wilderness of the Bansbari range of MNP during May 2013, in order to maintain and improve heterozygosity of the captive population.

Despite these efforts, however, the IUCN Red List of Threatened Species has categorised it as “critically endangered” and its population trend is marked as “decreasing” still.

Narayan says that the pygmy hog could be a key indicator of ongoing wildlife management practices in the country. The species had disappeared from those grasslands that still support some others, and it is important to understand why this particular species disappeared faster in comparison to other less sensitive species. This, points out Narayan, would provide pointers to useful and necessary steps to preserve the original habitats.

Once the habitats of the pygmy hog are protected, it would eventually help the survival of all species living in those habitats, he adds.

The species largely depends on tall grass, ranging between one and four metres in height. Such grass is often harvested by rural communities during winter, and also subjected to indiscriminate annual burning. Instead of such indiscriminate burning, phase-wise “controlled burning” at different times may help to protect their original habitat to a larger extent.

Grazing of domestic animals in herds is also a major threat for protection of the species.

It is not just ecological fragility that poses a challenge for conservationists. Despite its successful attempts so far in saving the endangered animal, the PHCP has been facing an acute funds crunch of late, as most of the projects funded by different agencies have already been successfully completed.

“Fortunately, I was selected for the “Save The Species” award by the Royal Bank of Scotland during 2014. As part of the award I received Rs.1.5 lakh. As the PHCP is facing serious financial problems, I have donated the entire sum of the award money towards continuation of the project. I am afraid we may have to close down the programme in the future, if such a situation persists for long. We have also been trying to raise funds in different ways; for example, we have approached the Oil and Natural Gas Corporation to see if they can donate some amount from its Corporate Social Responsibility fund,” says a worried Narayan.

One can only hope that an entire generation that may never have seen the pygmy hog, but for the efforts of the PHCP, will rally to ensure that it can continue in its commitment to keep biodiversity alive.

[** There was a misprint in the text here that has since been corrected.]