Moner Manush is contemporary and topical as it talks of peace, harmony and religious tolerance at a time when India is ridden by fundamentalism and intolerance in different pockets. Shoma Chatterji reviews the film.
12 January 2011 -

After a gap of 58 years, a Bengali film, Moner Manush was premiered on the same day in India and Bangladesh, creating a milestone in cultural synergy between two countries. The film, an Indo-Bangladesh co-production directed by Gautam Ghose, is based on Sunil Gangopadhyay's novel of the same name, and won the Golden Peacock award at the International Film Festival of India in Goa recently.

The film is a partly fictionalised, partly real documentary of the strange life of Lalon Phokir, a leader of the Baul performers in Bengal who over time became an institution unto himself. Phokir, probably born in 1774 in the part of Nadia district now in Kushtia, Bangladesh, and lived to be more than a 100 years old. He composed a thousand songs, of which just 600 can be traced. He rejected the division of society into communities, protesting and satirising religious fundamentalisms of all kinds.

The Bauls are wandering minstrels in Bengal whose songs of joy, love, and longing for mystical union with the divine evoke a profound spirituality. They took elements from devotional Hinduism, tantric Buddhism, and Sufi Islam and integrated them into simple, natural, and direct approach to God that seeks to transcend established religious boundaries. They believe that love for humankind leads to love for God. The best worship of God takes place only deep within one's heart, translated to 'Moner Manush.' The word baul is derived from 'batul', meaning "afflicted with the wind" or "mad." Thus branded "crazy for God," the Bauls have remained apart from society, wandering free as the wind.

The essence of this philosophy comes across brilliantly in Ghose's musical - and it merits this tag because, "it has 32 songs that form part of the verbal interaction between and among the characters," says Ghose. "There are no notations for Lalon Phokir's songs. That is what pushed me to his village in Bangladesh, to find out about the notations. I adapted songs that were sung by the existing Phokirs there." 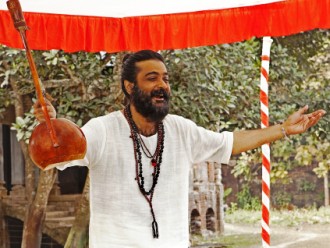 The beginning of the Baul movement was attributed to Birbhadra, the son of the Vaishnavite saint Nityannda. Another story goes that it can be traced to 8th century Persian minstrels called Ba'al. With time, Bauls became an integral part of the culture of rural Bengal. (Above: Prosenjit Chatterjee as Lalon Phokir).

Moner Manush can be described in other ways too - as an ethnographic film that traces the anthropological and cultural history of this ethnic sect who spread their progressive and secular faith through their song and music; as a historical film, as it spans a period and a geography Indian cinema has not mapped the way it has been mapped in this film. It is also an educational film, shedding light on a little-known sect, on their unique ideology and lifestyle and their resurrection in modern times through cinema, theatre, literature and so on.

The film is structured within the discussions between Lalon Phokir (Prosenjit Chatterjee) and Jyotirindranath Tagore (Priyangshu Chatterjee), during the time the latter was sketching a portrait of the former. This sketch is the only idea we get of Phokir's physical appearance. We see a very old and bent man explaining his homespun philosophy of life in his simple way to the increasingly surprised Tagore. During the discussion, he breaks into a Baul number he composes spontaneously. With every line he sings, he opens a new window into the meaning of life, death,love, desire, God, religion, faith, for his listeners, be it the intellectual and modern thinker Jyotirindranath or the crazy Kalua who breaks into a dance the minute he hears Lalon sing.

The word Baul has appeared in Bengali texts as old as the 15th century. It is found in the chaitanya-bhagavata of Vrindavanadas as well as in the chaitanya charitamrita of Krishnadas Kaviraj. Some scholars, however, maintain that it is not clear when the word took its sectarian significance, as opposed to a synonym for 'mad'. The beginning of the Baul movement was attributed to Birbhadra, the son of the Vaishnavite saint Nityannda. Another story goes that it can be traced to 8th century Persian minstrels called Ba'al. With time, Bauls became an integral part of the culture of rural Bengal.

The Baul movement was at its peak in the 19th and early 20th centuries, but even today one comes across the occasional Baul with his ektara (one-stringed musical instrument) and begging bowl, singing across the far-flung villages of the state.

Prosenjit Chatterjee, Bengali cinema's numero uno who has been ruling commercial cinema for nearly three decades, outshines himself as Lalon Phokir. He went into a kind of professional sanyas for five months to internalise the spirit of a famous Baul. "My involvement with the character has changed my world-view. I have learnt that under the apparent restive spirit and wandering, under his repertoire of spiritual songs he composed, lay the basic philosophy of humanity Lalon held above everything else. They did have female consorts but it was just like a basic biological desire like hunger for food. Lalon believed that emotional ties would take him away from his ultimate destination, finding oneness with the Almighty. It took some time for me to come back to ground level after I came back."

Golam Phokir, a Nadia-based Baul who has played a cameo in the film, also doubled up as Prosenjit's trainer in this unusual role. "I taught him to play the ektara and dance like the Bauls," he says with a smile peeping out of his grey beard.

The Chilapata forests in North Bengal, a four-hour drive from Jalpaiguri make up the Indian part of the shooting locations. The scenes here were shot along the banks of the Bania River. Samir Chanda, who has won the National Award for Best Art Direction several times, created an akhra with some thatched huts and three houses. "The most challenging part of my design was getting the right props. We had a tough time finding a sarinda, a now extinct musical instrument the Bauls played once. To recreate the architecture of Lalon's time was another challenge."

"There were almost no frames of reference so we had to rely on whatever little was available and rest had to be done from imagination. A project like Moner Manush does not attract me for the money or the budget constraints we have to work in compared to the budgets in Bollywood. It attracts me for the special kick I get out of working in these films," says Chanda.

Bangladeshi actor Chanchal plays Lalon Phokir's friend Kalua. Zeeshan from Bangladesh plays the teenaged Lalon. Others in the acting cast are Champa, Tathoi and Raisul Islam Azad from Bangladesh. Latif Shah and Khuda Baksh have rendered the playback for the protagonist. Shahzad Firdous has written the lyrics. Farida Parveen, the famous Bangladeshi singer, has lent her voice to the single dance number, lip-synced on screen by Paoli Dam. Bibi Russell, the internationally renowned fashion designer has done the costumes for Moner Manush along with Gautam's wife Nilanjana. 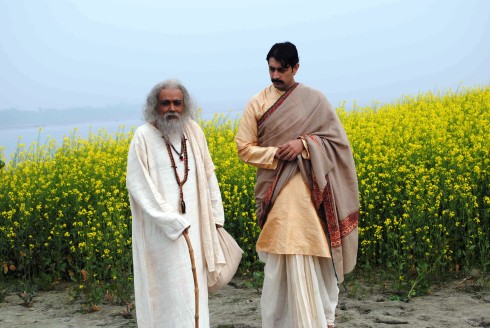 The film is structured within the discussions between Lalon Phokir and Jyotirindranath Tagore, during the time the latter was sketching a portrait of the former.

Moner Manush reaches far beyond the limited space of the screen to touch us the way few films can. The painstaking research is evident in every frame, as it pans across the river Padma in its leisurely pace, whether it is a long shot showing Lalon and his group rowing down the river on a boat, or, Lalon sitting on the river banks on a night of the full moon, gazing at its shimmering reflection in the river waters, when Komli silently comes and sits behind him, The river is like a metaphor for his unending journey, with is low lapping, its flowing waters, its silent support of a man who creates an unconventional home in an akhara to live with his disciples in the middle of a forest.

Gautam Ghose's cinematography is like a series of unbroken watercolour paintings in motion, enriching the narrative without overshadowing his directorial command and yet making its own statement. Says Ghose about the Golden Peacock the film won at Goa's IFFI, "the award is the most genuine endorsement of tolerance in our time when we are living through the gravest intolerance in history."

TIGER SANCTUARY : Are tigers back at the Buxa reserve?
MORE ARTICLES
on similar topics ...
FILMS