Where history and prejudice collide

While the old town is chaotic and crowded, on the other side the roads are wide and well maintained. There appears to be a complete disconnect between the two halves of Mirzapur, writes Kalpana Sharma.
01 September 2009 -

A turn off the legendary Grand Trunk Road that links Varanasi to Allahabad leads you to Mirzapur, the picturesque town on the banks of the Ganga. Headquarters of a district synonymous with carpet weaving, Mirzapur is a fascinating mix of the old and the new, of successful people's initiatives and a responsive administration, of change and hopelessness.

The old town of Mirzapur is a maze of narrow lanes not built for the automobile. Today they accommodate not just automobiles but rickshaws, horse drawn tongas, two-wheelers, bicycles, people and domesticated animals. Inevitably, there are traffic jams that are impossible to get through, as the only space on the sides of the narrow roads is an open drain. 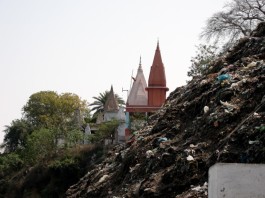 Temples, and a garbage mountain.

Mirzapur is also a Mandi town for the entire rural area around it, as is evident from the endless rows of shops selling every kind of merchandise including the yarn that will ultimately be used for carpets. It is also a town in transition, with the traditional and the modern jostling for space. Thus, you can see many beauty parlours, for men and women. Cricketer Anil Kumble's smiling visage is selling a branch of the Manipal University. A blonde woman tries to entice you to learn spoken English in an academy that is simply called American. Yet, step away from the market and you end up on the steps leading down to the Ganga, where people are bathing, washing clothes or worshipping at one of scores of temples built on the slopes.

While the old town of Mirzapur is typically chaotic and crowded, on the other side are the more orderly civil and police lines, where structures dating back from colonial times still survive and the bureaucrats live in houses with a river view. The roads are wide and well maintained. There appears to be a complete disconnect between these two halves of the town.

An estimated 29 per cent of Mirzapur's population of 205,264 (2001 census) is poor, living in one of 51 listed slum colonies. Many of these colonies have no water or electricity. One such is Visundarpur, located a stone's throw away from the well-appointed river-facing bungalows of the bureaucrats. The residents of this slum have no water or electricity. But when the women are asked what is the most urgent need, they speak in unison: toilets. The men concur. Women say that in the town there are no secluded spots where they can go. So they wake up at the crack of dawn and walk a considerable distance to some fields on the edge of town. Although land has been identified for a public toilet, nothing has been done. Over 375 people have applied for the toilet scheme under which they get a subsidy to build a toilet attached to their houses. But this too has not moved ahead.

Thanks to the presence of the NGO, Sahbhagi Shikshan Kendra (SSK), some change has taken place. Today the municipality cleans the slum every day when in the past this happened only once a fortnight. People themselves are more conscious and are doing something. A local youth, Rajiv, who lives in the basti runs adult literacy classes for the women. They are enthusiastic about this and say they want to be able to read and write and recognise numbers.

While poor communities like people in Visundarpur are willing to take the initiative, the iniquitous distribution of urban resources makes it difficult to sustain their enthusiasm. Not far from Visundarpur is Tarkapur, near the police lines, a settlement of chamars (Dalits). The residents complain bitterly that even though the settlements all around them are connected to the sewerage system, they have been overlooked. "This is a basti of Chamars. If Brahmins and Thakurs lived here, something would have happened. All around us there are sewer lines, but it hasn't come to our area. There are no toilets. Twenty five per cent of the women go on the road," says Chandan Tyagi, a young graduate whose father is a tailor.

Five young men, one a graduate and others who have completed 12th standard, speak of their future prospects. They say that carpet weaving, a traditional craft in Mirzapur is finished because of the decline in export orders. "We will have to go to a bigger town to find jobs," says Rameshwar Kumar, a graduate. "We have to bribe to get a government job. Without money you can't get anything. You have to pay a minimum Rs. 4 lakhs for a clerk's job and Rs 2 lakhs for a Class IV job. Why should anyone want to become a thief? But then what is the other option?" he asks.

Educated young Dalits in the town are frustrated by the lack of options.

While the educated young Dalits of Tarkapur are bitter about the lack of opportunities, even the better off rue the lack of employment sources in and around Mirzapur. Deep Chand Jain is the Chairman of the Nagar Palika. "We need employment, not drains and street lights", he says. Jain grew sugar cane once and his son was in the carpet business. Both businesses have stopped. For his son's loss, he blames those campaigning against child labour.

Jain complains that even though Mirzapur is an ancient city, "we are unlucky that no one thought of any industry that would employ our educated young. The Government gave a good package to Allahabad and Varanasi but Mirzapur in the middle got nothing", he says.

The task of keeping the town clean is especially difficult, says Jain, because there are not enough workers and inspectors for the 35 wards. He says it is also difficult to change people's habits. For example, even though people have got toilets through various government schemes, they prefer not to use them and instead turn them into storerooms. The municipality put metal bins in different parts of the town for garbage, but they get stolen. When permanent garbage bins were built, people threw the garbage all around them. Even the sewerage built in the early nineties covers only 25 per cent of the town. Jain feels that Mirzapur needs an urgent injection of funds to deal with some of these chronic problems. His own efforts to get funds from the Jawaharlal Nehru National Urban Renewal Mission (JNNURM) have failed.

Mirzapur has one of the most highly educated municipal bodies. There are four practicing lawyers, several members who have done their post graduation. Jain says that it is probably the best-qualified urban local body in the state. Yet, this does not seem to help them to overcome the systemic blocks that come in the way of efficient functioning.

For example, Executive Officers posted in Mirzapur do not last long. Their inability to get along with the Chairman of the council means they leave, or try to leave even as they take up their duties. Since 2006, there have been three different EOs.

The Commissioner of Mirzapur, Satyajit Thakur, IAS, has little faith in the ability of the elected body to do anything. "Ward members are supposed to formulate projects and submit them. They should also generate some income. They don't use even the sources that they have. They are highly politicized and discriminate on that basis. They're not even collecting the taxes that they can. They keep on hoping that the government will help. It's not as if they don't have money. They can't even pay money to their employees," he says.

Thakur has been pro-active in trying to get people in the town to take some responsibility for civic issues. He has been speaking to students in schools and colleges. "We need to do some public education. For any fault, people blame the government. They won't take any responsibility", he says.

Not everyone is as negative as Thakur and Jain. Mamta Yadav is an MA in history and one of the women councilors in Mirzapur. Her husband is a cable operator in five wards. Mamta has also done a computer course. This 28-year-old woman is one of the most articulate and enthusiastic woman councilors I have met.

She proudly tells me that she got the largest number of votes. "People thought we should vote for an educated person", she says. She has been asked to head the standing committee on education and is most excited about that. Although the job entails looking after only two or three municipal schools, Mamta is looking forward to the task.

While poor communities like people in Visundarpur are willing to take the initiative, the iniquitous distribution of urban resources makes it difficult to sustain their enthusiasm.

Most of the complaints of the poor are about ration cards and BPL cards. Others complain about roads and water, she says. There are 11 women in the Nagar Palika but only two or three actually participate in the discussions. "Some of the women are housewives and don't understand anything. So what's the point of training them?" she asks.

Mamta is pleased with the attention she receives now that she has been elected. "Netagiri acchi cheez hai" (politics is good), she says with a smile. "Now I meet all the officers and get power and respect. And also money. What else do you want in life?" she asks.

Yet, she too acknowledges that there are problems with the working of the municipal body. "We should have meetings every month but there has been no meeting in three months", she says. The Chairman doesn't call for meetings, she complains. And the Executive Officer keeps changing. As a result, even though she is eager to start something with the education system in the town, she can do little.

Mirzapur is growing without a plan. Its population is also increasing. Yet the civic facilities are not keeping pace with these needs. There are systemic problems with system of urban governance that are all too apparent here. A pity, because Mirzapur is typical of so many small towns that have the potential to demonstrate sustainable growth that can make them attractive alternatives to the bigger cities.

CHANGEMAKERS : A fuller picture of ourselves
MORE ARTICLES
on similar topics ...
CITIES