ENVIRONMENT / IN SEARCH OF POTABLE WATER

Why women in this village can't cook dal

If you keep water standing in a glass for a while here, it causes a stain around the rim. Pamela Philipose describes the tribulations and ordeal of women in Mamana village of Uttar Pradesh, as they fight to collect potable water everyday.
07 June 2013 -

The expression “dal-roti” defines the “everyday” in Uttar Pradesh’s Hamirpur district, as it does in much of north India, being the staple fare here. The region, in fact, is sometimes referred to as the ‘dal’ (lentil) bowl of the state. So the problem faced by the women of Mamana, a village that falls in this district, has an almost surreal touch to it - they cannot cook the famous ‘arhar dal’ that grows in the surrounding fields in the water they collect from hand pumps in their neighbourhood.

If you inquire locally about Mamana, which lies somewhere between the towns of Rath and Sarila, you will be told that it is a “water crisis” village and that it would be wise not to marry your daughter into a household there, because all she would be doing for the rest of her life thereafter will be to chase after potable water. This is because every one of its 40 hand pumps yields only brackish water. According to data put out by the Delhi-based The Energy and Research Institute (TERI), 1,62,000 villages in India face the problem of brackish or contaminated water and a scarcity of fresh water. Mamana, with a population of 4,387, is clearly one of them. 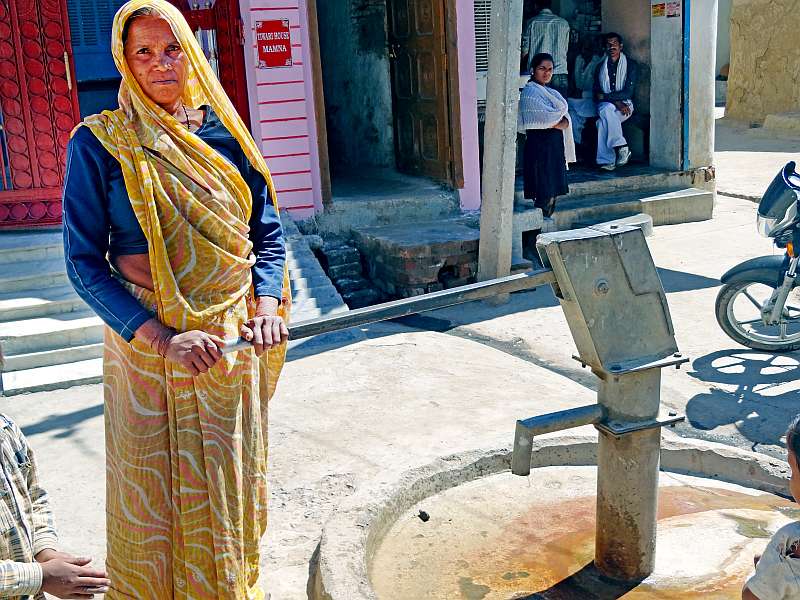 Mamana, which lies somewhere between the towns of Rath and Sarila, in Hamirpur district of Uttar Pradesh, is known as a "water crisis" village because every one of its 40 hand pumps yields only brackish water. Pic: WFS

People in Mamana can recognise the hardness in the water easily enough. If they use soap, they will find that it does not lather and instead leaves a white deposit on the body. If they leave water standing in a glass for a while, a stain forms around the water’s rim. Cooking dal in this water would be a disaster. Explains Guddi Devi, “If we make ‘dal’ with water from a hand pump here, the ‘dal’ and the water will remain separate even after an hour of cooking. Pani bilkul khaara hain (the water here is completely brackish).”

Hardness in water comes from heavy metals and minerals that have made their way into the water from sedimentary rocks, seepage or farm runoff. Substances like calcium and magnesium, emerging from limestone and chalk deposits found in soils also have a presence in the water. The ill-effects of drinking hard water are widely recognised in the whole of Hamirpur. As one old man in Sarila block put it, “Many people here complain of pain on one side of their stomach and it is said that this is because of kidney stones caused by the poor quality of drinking water.”

Interestingly, the 'good water', when it is available, is reserved not just for cooking, but for the men of the family - who are allowed  the luxury of having a bath in fresh water, despite not having lifted a finger to collect it. The sight of women and young girls hauling pitchers and buckets is common enough, but rarely can men be spotted doing similar activity.

•  The colour of water
•  Deeper resolve brings them water

Mamana has 742 households, of which 369 are from the Scheduled Caste (SC), 275 belong to Other Backward Classes (OBCs). There are also 55 Muslim and 45 Upper Caste families. As in the rest of UP, caste determines every aspect of life, including the quality of water that reaches you. Unsurprisingly, Dalit and Muslim neighbourhoods are the least serviced and the hardest hit when there is an acute shortage of water in the punishing months of summer when temperatures soar to 45 degree Celsius and heat eviscerates the body. Only 141 households in Mamana have access to piped water that comes from the adjoining village of Mankheri, six kilometres away. The rest have to make do with a common tap located at the side of the road as it enters the village.

While there is a general rush to try and collect as much of piped water as family storage facilities allow, there is the occasional breakdown to contend with. Guddi Devi explains, “For water supply in the common tap, we need power, and sometimes there are serious breakdowns in transmission. Water is supposed to come at 6 o’clock in the morning, but anything can happen, a transformer can go kaput, a storm can bring down an electricity pole or there could be a breakage in the connecting pipe.” 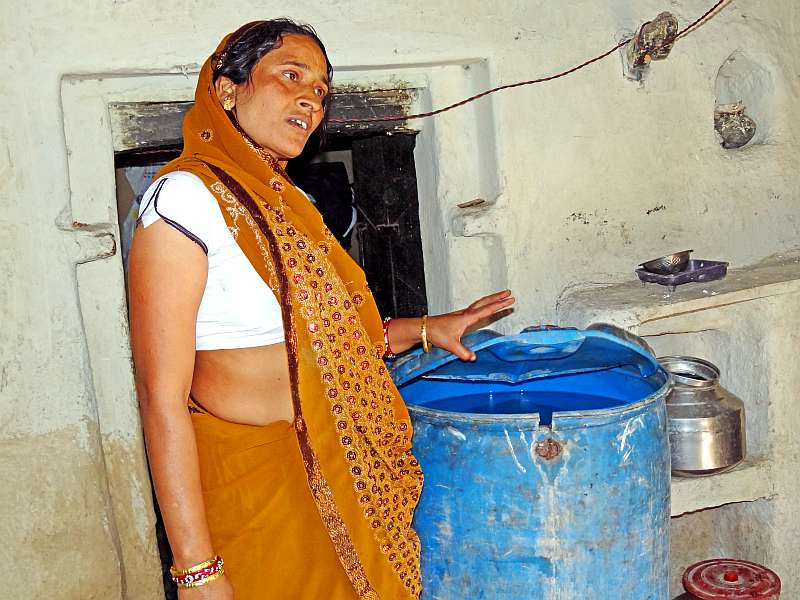 So what happens when government water supply proves elusive? The local pradhan will then have to get water ferried in by tankers - a move that can cost around Rs 1,500 a trip. Although this is an expense borne by the gram panchayat, the quality of the water supplied in this way leaves much to be desired. Reveals Guddi Devi, “Things get very tense. Fights break out to access the six wells that have ‘meetha’ (sweet) water and the water from the tankers, which is often filthy. Sometimes we are not able to fill our ‘gagariyan’ (pitchers) from even these sources and have no option but to drink the brackish water in the hand pumps. ‘Jeena hai to peena hai’ (if you have to live, you have to drink).” 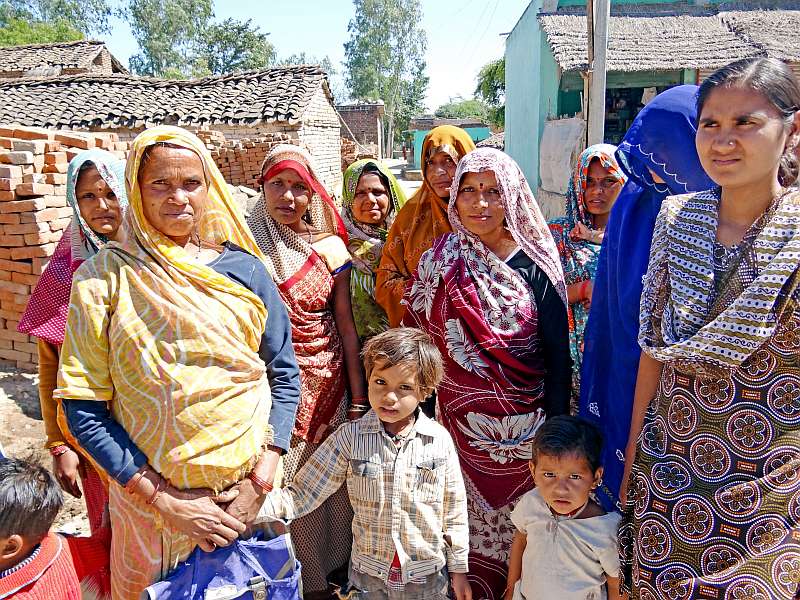 The women of Mamana have set up a 'paani panchayat' (water governing group). Pic: WFS

Interestingly, the ‘good water’, when it is available, is reserved not just for cooking, but for the men of the family - who are allowed the luxury of having a bath in fresh water, despite not having lifted a finger to collect it. Women traditionally have been given the drudge task of collecting water for all domestic purposes, including watering the cattle if there are any. The sight of women and young girls hauling pitchers and buckets is common enough, but rarely can men be spotted doing similar activity. As young Pratiskha Devi, in another village in this region, put it, “Even when we are burning with fever we have no escape from collecting water.” 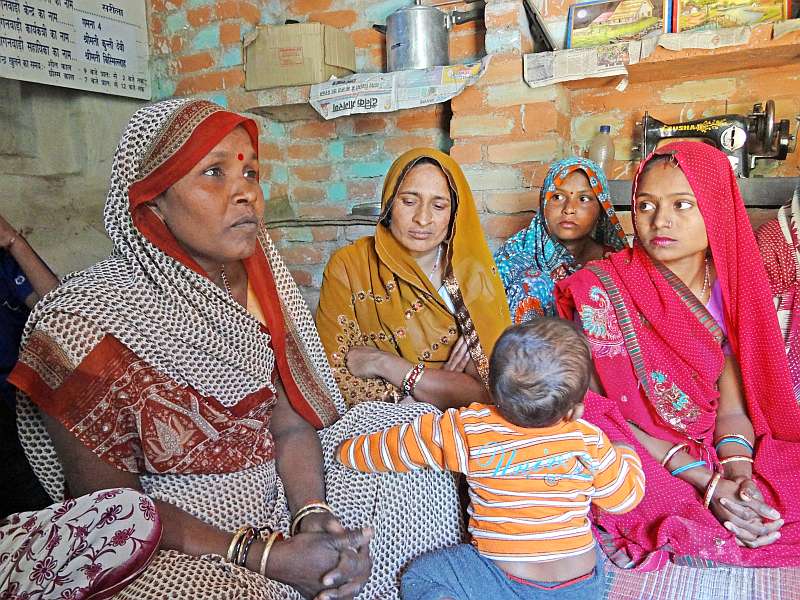 Yet, so deeply internalised is the norm that it is a woman’s responsibility to collect water, that not one woman complains of this unfairness of it. And as water gets scarcer, as construction activity proliferates and water bodies disappear, the increasing burden of collecting water for the household can only be expected to rise exponentially.

Despite their lot, however, the resourceful women of Mamana find ways to keep going. When the piped water does come, they make as many trips as are needed to fill up every container in their home. “It is like gold for us - and we are constantly hoarding it for a day when there is no water in the tap!” laughed one, who showed us how carefully she stored water in her home - with drinking water and water for cleaning and bathing purposes stored in different containers. The brackish hand pump water is usually utilised for tasks like washing clothes and utensils, while potable water is used for cooking.

Awareness about every person’s right to clean water is also growing. Women in Mamana set up a ‘paani panchayat’ (water governing group) in February 2012 with the help of the Orai-based Parmarth Samaj Sevi Sansthan under a project supported by the European Union. Organising themselves has given these women the confidence to speak up and place their demands before the authorities. Last October, they met the Sub Divisional Magistrate at Sarila town to demand an extension of the government water pipeline to Mamana’s Scheduled Caste neighbourhood.

They have even found a balladeer to sing about their difficulties - Kunti Devi, who plays a major part in Mamana’s ‘paani panchayat’. She sings songs that she has written herself in a firm, strong voice. One of them went: “Oh water, how many sacred names you bear/ Oh water, you are truly a life giver/ Oh water you are part of nature/ Oh water you are part of our culture/Oh water please come down to us.” (Women's Feature Service)

Pamela Philipose is director and editor-in-chief of Women's Feature Service. This article has been provided by the WFS.