Around 80,000 children in Madhya Pradesh are suffering from severe malnutrition. So stark is the situation that one evaluation report has said that even if the children were saved, they may go blind due to lack of vitamin A. Sachin Kumar Jain chronicles continuing negligence in government departments in M.P.
20 October 2005 -

In last two years malnutrition -- an indicator of human development -- has been on the rise in Madhya Pradesh. According to data collected a few months ago by the state government's own Bal Sanjeevni Abiyaan scheme, eighty thousand children are suffering from most severe malnutrition and are on the verge of death.

The Bal Sanjeevni Abhiyan scheme itself was launched by the government to address and control the problem of the severe malnutrition in the state. It has completed its 7 phases since June 2001, but the persistence of malnutrition arises from the manner in which children's issues are vested with the Women and Child Development Department. The Health Department as well as the Panchayat and Rural Development Department do not find themselves responsible and accountable towards previous starvation deaths, even though in reality, they have a responsibility. Civil society organizations in the meantime are raising strong concerns about this but the state government remains unmoved on remedying the situation. 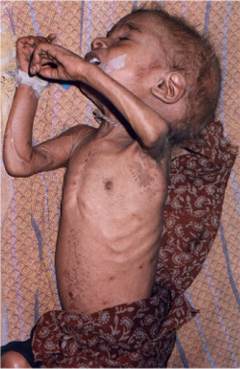 Malnutrition in itself is a multi-dimensional problem because it is related with the process of socio-political transformation like social behaviour, household livelihood, state services, equality and human rights with dignity. It has been observed that immediately after the birth of a child, mother feeds the child for around 6 months and then the child does not get nutritional food for his growth and development due to household food insecurity. A child requires more attention and supplementary nutrition during the first two years immediately after birth because during this period of age, 80 percent physical and mental growth takes place. But due to poverty they don't get qualitative food and after a point, hunger deaths begin.

In Madhya Pradesh 37% deaths registered between 0 to 4 years are due to chronic hunger. The Women and Child Development Department has tried to provide daliya (porridge) and panjiri (bulgar) to children up to the age of 6 years. But this approach has had very limited success. Also, in M.P., the under-five mortality rate is 87 per 1000 live births compared to Kerala, which reports 19 per 1,000 live births. Experts say low birth weight babies - 55.1 per cent in M.P. are more vulnerable to malnutrition deaths. Madhya Pradesh is one of the most populous states in India and together with Bihar, Orissa, Rajasthan and Utter Pradesh will account for 50% of the India' by the year 2012, says the 10th Five-Year Plan, Planning Commission, Government of India. It is also the state with the highest malnutrition.

The Department of Women and Child Development collects data on children with the help of Anganwadi workers from villages related to the children's height and weight and determines which children are malnourished. But the department does not collect data related to the livelihood, social discrimination and household food insecurity.

Under the national Food For Work Program, the state government provides manual work to the all needy persons along with 10 kg of grain. Employment is the responsibility of the panchayats and other government departments. Contractors and use of labour displacing machinery is banned. In Khandwa, the Spandan organization working for Right to Food and Work had made the connection between chronic malnutrition of children and employment of parents. Spandan has been arguing that families having malnourished children should be given employment on priority basis.

In response, the district administration (through the WCD Department) had taken this step at the state level and issued directions to prioritise such families with malnourished children in the Food for Work program. But the implementation of the FFW program is in the discretion of Department of Rural Development which is not responsive towards children's issues. So implementing the concept of priority in the schemes does not happen.

In the meantime, the children are on the brink. They need immediate health services and to provide them 160 grams daliya to make them healthy does not make sense. They digestion capacity decreases during acute malnutrition. There is no system has in place to provide supplementary nutrition in installments and after a break of 3-4 hours. A report prepared by RCVP Narohana Academy of Administration, which evaluated the Bal Sanjeevni Abiyaan affirms that the Health Department is not taking any responsibility and that badly needed vitamin A is also not provided to the affected children. The report also observed that even if children suffering from severe malnutrition were saved they would become blind due to the lack of vitamin A.

Even when an Anganwadi worker identifies a malnourished child, they are not able to help in the absence of the doctors or the health workers. Anganwadi workers always appeal for help from ANMs (Auxiliary Nurse and Mid-wife) and health officials. If ANMs and health officials wished, they could help, but normally they don't do so because they have not been made responsible since they report to the Health Department. Still, the Anganwadi worker gets less respect than ANM from the community because the ANM's work assumed to be technical in nature. This despite the fact that ANMs are not performing their responsibilities at the community level and are usually not interested in taking the children to the hospital. Anganwadi workers on the other hand play a most crucial role, but they don't receive supplies of supplementary nutrition, medicines, support from the state and training even though high expectations are placed on them.

There are only 12407 beds available in the rural hospitals which are always occupied even when services are not available. 80,000 children are to be treated in these hospitals as per a new scheme.

Government officials usually say that children are dying due to TB, diarrhoea and measles and not due to malnutrition. True. But they conveniently forget that malnutrition creates the ground for these diseases. Only 31% of immunization has been done in Madhya Pradesh, for which the health department is responsible. These diseases occur due to the lack of immunization and decrease the life expectancy of children. Again, the Women and Child Development Department is held responsible for children dying, even though the health department has responsibility too.

Amidst all this, the Department of Child Development announced a new scheme in August 2005 called Bal Shakti Yojana. According to the department, severely malnourished children will be hospitalised and state will also make arrangements for their parents taking care of them in the hospital. The scheme uses colourful words -- it says that children suffering would be admitted in the hospitals till they become healthy and the family members would also be provided the facilities to stay there. The government says it is going to spend an amount of Rs. 12 crores under this scheme, but the facts and figures make these colourful dreams dark.

One, according to a perspective document of the Health Department itself, only a tiny Rs 125 per person is being allotted in the annual budget of the department and this includes costs of medicines and other services. Two, in Madhya Pradesh there are only 12407 beds available in the rural hospitals which are always occupied even when services are not available. 80,000 children are to be treated. If we take out all the patients from the illusive hospitals, we can treat only 12 thousand children at a time. Further, there are only 90-child specialists working in the state system. The state health system requires 718 doctors, (428 in community health centres, 48 in district hospitals and 6 in medical colleges) and emergency doctors. But due to the pressure of the government's work culture and unavailability of infrastructural facilities, many doctors are not ready to work in rural areas.

The Balwadi health centre of Sendhwa block in district Badwani covers 30 villages and its total population is 21,000. For the last three years, the post of the doctor in the centre is lying vacant. In this situation 13 children died due to malnutrition and 16% children are currently suffering from severe malnutrition.

It is well known that health officials and doctors do not take any interest in providing expert services to the rural and marginalised communities in the state. The state government recently terminated the services of 900 doctors who were absent from the work for last 3 years. But doctors say that they are only human and without medicines, equipments and other infrastructural support they cannot perform their duties, and in this situation their presence is useless. It in this light that announcement of the new scheme to redress child malnutrition must be seen.

This issue of child malnutrition is also closely related with the government information system. Information that government officials readily want reaches them immediately through informers. If a meeting is ongoing in tribal villages on the issues of forest and land rights then the informer conveys this to the state government and the chief minister without any hurdles. The Home Department tries to then control such meetings and sometimes orders the arrest of activists immediately. It takes only 5-6 hours to complete this process.

On the other hand, government officials tend to learn information regarding malnutrition and hunger deaths through newspapers, usually only if it becomes a sensational issue. When the response begins, it is after the death of children. Usually, it takes 20-60 days for information to reach the administration or concerned department.

Families facing acute poverty should be identified and be provided with livelihood and dignity on priority. But lack of accountability and coordination between the Department of Women and Child Development, Department of Health, Department of Panchayat and Social Welfare, Departments of Rural and Urban Development, and Department of Education has to be seen as a big draw back in the campaign against malnutrition.

The state and the political groups do not have a strategic understanding to solve the problem of malnutrition. They see it as an untouchable issue to protect their self interests. The government does not want to believe that malnutrition is a result of its anti-human rights development policies. There is no magic that can solve the problem. This is not the issue of the state only, our NGOs and society are also appear to be not very much bothered about it. Children die in the meantime.

Sachin Kumar Jain is a coordinator of the Vikas Samvad development media advocacy initiative in Madhya Pradesh. He is also associated with the Right to Food campaign for the past 4 years. He wrote this material originally in Hindi and subsequently translated it.